Perry, Romney Tee Off on Obama Over Israel, Palestinian Statehood 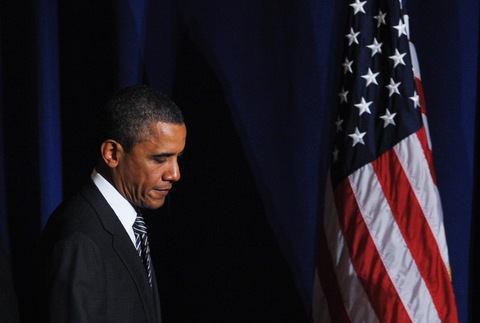 President Obama may have thought he was leaving domestic political squabbles behind when he headed up to New York for the U.N. General Assembly this week.

But with the Middle East issue front and center for the president as the Palestinian Authority seeks statehood recognition at the United Nations, his Republican opponents seized the opportunity to portray his administration as not sufficiently strong on Israel.

“Simply put, we would not be here today, at the precipice of such a dangerous move if the Obama policy in the Middle East wasn’t naive, arrogant, misguided and dangerous,” Texas Gov. Rick Perry said at a Manhattan news conference Tuesday.

As we reported Tuesday, Mitt Romney slammed President Obama’s handling of the Palestinian pursuit for statehood as an “unmitigated diplomatic disaster.”

However, as the New York Times reports, a cutoff of aid may prove precarious for Israel. Prime Minister Benjamin Netanyahu recently lobbied House Republicans to ensure passage of $50 million in new aid to the Palestinians.

President Obama’s mission at the U.N. on Wednesday is far more complex than American campaign politics permit. He will attempt to walk Palestinian President Mahmoud Abbas back from the brink in hopes of avoiding a promised Security Council veto and the reaction that will draw in the Middle East.

“There’s been no administration that has done more to defend and protect Israel’s security than the Obama administration,” Rice said.

“Our foreign military financing is at an all time high,” she added. “We’re sharing the most advanced technologies with Israel and giving them technology like ‘Iron Dome,’ which is preventing them from being hit by rockets. Prime Minister Netanyahu said last week were it not for the United States, the Israeli presence in Egypt and the Israeli diplomats there would have been in grave danger. Every day, at every turn, we are defending and protecting our ally Israel, whether in the United Nations or on the ground. So, for those who want to play politics, they’ll play politics, but the reality is Israel has had no better partner than this administration in the United States.”

President Obama is scheduled to address the U.N. General Assembly at 10 a.m. ET. He follows his speech with an 11 a.m. meeting with Netanyahu. Later in the day, he will meet with Abbas before heading back to Washington.

Perry’s campaign launched a new web video Wednesday that aggressively assails President Obama’s stewardship of the economy — and draws a sharp contrast to the experience of the Texas governor.

POLITICO’S Mike Allen had the first look at the clip, which was produced by Lucas Baiano, whose Hollywood-style spots had been an early trademark of the now defunct Tim Pawlenty campaign.

The video begins with images of economic desolation and a quote from the president — “Despite all the naysayers, who were predicting failure, our economy is growing again” — as thunder clashes and a siren sounds in the background.

The clip shuffles through snippets of news analysts commenting on the August jobs report that showed zero net jobs growth. Then, type appears on the screen: “ZERO ‘HOPE'” and “ZERO ‘CHANGE.'”

The Obama campaign logo also makes multiple appearances in the video, and it’s clear that Perry’s team is trying to alter public perception of what the ‘O’ symbolizes. Instead of an optimistic sunrise on the horizon, Perry’s campaign wants the image to trigger the thought of a struggling economy and lackluster job creation.

The last minute of the video turns to Perry, using audio from his presidential announcement speech and pairing those with patriotic images, such as the Statue of Liberty and no fewer than a dozen American flags — not counting the one used as a backdrop for Perry’s speech.

The spot begins its close with Perry saying, “With the help and the courage of the American people, we will get our country working again,” overlaid with text that reads, “A PRESIDENT WHO WILL LEAD A NATION,” and ends on the Perry campaign logo over an American flag waving in the wind.

The video is itself emblematic of the task ahead for Perry, and the rest of his Republican rivals for that matter. On one hand, he needs to burnish his anti-Obama credentials for the GOP nominating crowd; on the other, he has to convince moderate/independent voters that he stands for something, and not just against someone.

It appears that South Carolina’s key, first-in-the-South primary is a two-man race, with Perry and Romney outpacing the rest of the field.

A Winthrop Poll released Tuesday showed Perry was the first choice of 30 percent of respondents, with Romney close behind at 27 percent and within the 4 point margin of error.

The closest contender was businessman Herman Cain at 7 percent. Third place actually belonged to “undecided,” which was the pick of 12 percent of Republicans surveyed.

Former Alaska Gov. Sarah Palin, who is not a declared candidate, was backed by 6 percent of respondents. Reps. Michele Bachmann and Ron Paul each received 4 percent.

The poll is good news for Romney, as it shows him competitive in the deep South, which should be Perry’s turf. For Bachmann, the survey is yet another dose of tough news, with national polls showing her slipping — and her former campaign manager telling the press that she doesn’t have the resources to compete beyond Iowa.

It’s been mentioned in this space (and elsewhere) many times before (and will certainly be again), that the winner of the South Carolina GOP primary has gone on to claim the nomination in every election since 1980.

For all future campaign events, check out our Political Calendar.