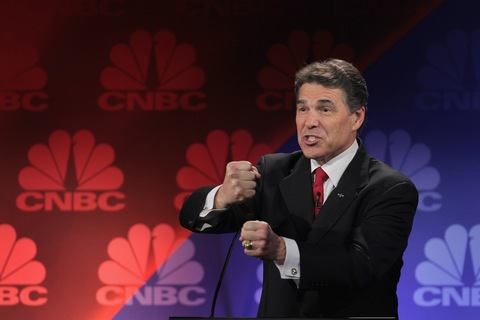 You know you didn’t have a good night as a presidential candidate if you need to get up early to do a round of morning show interviews in which you have to assert you’re staying in the race.

“You know what today is? It’s the 236th birthday of the United States Marine Corps. If there was a day to stay in a fight, this is it,” Rick Perry told Ann Curry on NBC’s “Today” show. “You bet I’m going to continue on, and this campaign is about ideas, it’s not about who’s the slickest debater or whether anyone has made a mistake or not. We’re all going to make mistakes. It’s about laying out our vision,” the Texas governor added.

Perry committed the debate flub heard ’round the world Wednesday night. And, unfortunately for his campaign, it will be seen and heard again and again and again in perpetuity thanks to YouTube.

Perry, who has seen his prospects for the nomination decrease after a series of poor debate performances, had a complete mental freeze on the stage in Rochester, Mich., when he tried to think of the three Cabinet-level agencies he would eliminate as president.

If you have not yet seen the 53-second clip, be sure to watch it immediately:

The Perry campaign knew immediately they had a major problem on their hands. The candidate himself clearly knew it the moment he ended his rambling answer without coming up with the third agency and simply stated, “Oops.”

Perry made the unusual move of going into the post-debate spin room himself to talk to reporters and try to start the clean-up process. “I stepped in it,” he confessed.

A few hours later, his campaign blasted out an email to supporters aimed at both creating sympathy for an all-too-familiar brain-freeze moment and at raising some money off of the 24-hour media storm about to hit:

While the media froths over this all too human moment, we thought we would take this opportunity to ask your help in doing something much more constructive: write us to let us know what federal agency you would most like to forget.

Is it the EPA and its job-killing zealots? The NLRB and its czar-like dictates? The edu-crats at the Department of Education who aim to control your local curriculum? Send your answer to forgetmenot@rickperry.org, and if you are on twitter join us in using a new twitter hashtag: #forgetmenot.

As we mentioned, Perry did a round of morning show interviews to try and laugh off the flub. He again trotted out the line he used after his unimpressive debate performance in Florida in September by telling ABC’s George Stephanopoulos that if voters are “looking for the slickest debater or the best smoother politician” they will need to look elsewhere, but if they are looking for the “principled conservative” in the race, he hopes to win their vote.

Jeff Zeleny and Ashley Parker of the New York Times succinctly explain why the Perry flub is as potentially devastating as it seems:

For any other candidate, the moment may have been quickly forgotten or easily explained. But for Mr. Perry, whose candidacy has been consistently undercut by his debate performances, the gravity of the matter grew obvious as chuckles in the Republican audience turned to gasps. The lapse reinforced negative stereotypes about his candidacy, a point that was made clear after the debate when he made a rare trip into an adjoining room to face reporters and try to brush away what had happened.

Herman Cain, who has been batting down sexual harassment allegations for the last two weeks, got one question about character, and the friendly crowd in the debate hall jeered at the questioner as she posed it.

“The American people deserve better than someone being tried in the court of public opinion based on unfounded accusations,” Cain said to applause.

“I value my character and my integrity more than anything else,” he added.

And Mitt Romney, the candidate who’s running close to the top of the GOP field with Cain, made a rhetorical move worth noting as he starts trying to beat back the image of a flip-flopping politician with no core of conviction. That’s the main line of attack from the Obama campaign and Democrats against the man they believe most likely to be the GOP nominee.

He went on to cite his 42-year marriage to his wife Ann, his 25 years at Bain Capital and his lifelong commitment to his church as the supporting material to his thesis.

If Romney can begin to chip away at the flip-flopping caricature that still hangs on him heavily from his 2008 run for the White House, it will go a long way to help positioning him for a potential general election against President Obama.

Keeping with the theme of getting two out of three, every successful presidential candidate since 1964 has carried at least two of the following three swing states: Florida, Ohio and Pennsylvania. A Quinnipiac University poll released Thursday found that the contests are likely to remain competitive in 2012 — especially in the case of an Obama-Romney general election matchup.

The Quinnipiac survey showed that Romney holds a narrow advantage in Florida, 45 percent to 42 percent, while those numbers are reversed in Ohio, giving the president a three-point lead. In Pennsylvania, the president leads Romney by a single percentage point, 44 to 43. All of three of the Obama-Romney match-ups are within the margin of error.

The other three Republican presidential hopefuls tested — Cain, Perry and Newt Gingrich — all fared much worse against President Obama. All three trail the president by double-digits in Ohio and Pennsylvania, but do pose more of a threat in Florida, where they are behind by single digits.

“Florida is shaping up to be the closest swing state again in 2012 and it’s a fair bet that a year from now, it will be the toughest of the Big Three for Obama to carry,” said Peter Brown, assistant director of the Quinnipiac University Polling Institute.

Among Republican voters, however, Cain leads the field in Florida, with 27 percent, and Ohio, with 25 percent. Romney draws 21 percent support in Florida and 20 percent in Ohio.

The two contenders are tied at 17 percent each in Pennsylvania.

In that respect, the Quinnipiac survey is reflective of the picture nationally for Republicans, with Romney often seen as the most electable candidate, but one that a large number of GOP voters have yet to embrace.

LOOKING FOR (THE NEXT) LOVE

Reggie Love, the Duke University basketball player-turned-Obama “body man,” is planning to leave the administration by the end of the year, reports the Washington Post’s Anne Kornblut.

Love’s exit comes at a time of transition for the administration: several longtime advisers have left over the last year, in keeping with the time-honored tradition that close aides do not abandon the president immediately before an election. But Love’s position may be among the most difficult for Obama to fill.

Obama has described Love as “the person who keeps me on schedule.” But like many young loyalists on the Obama staff, Love has evolved into a much more important role over time, acting as a gatekeeper and a liaison – and basketball buddy.