In between the public appearances there was a lot of private assuaging and reassuring being conducted on the telephone with donors and supporters.

All that work only to find himself waking up Friday morning one day away from the next debate, a forum that has clearly been unkind to his candidacy thus far.

The Republican presidential contenders take to the stage Saturday night in South Carolina for the CBS News/National Journal debate, which is expected to focus largely on foreign policy and national security.

And it occurs as businessman Herman Cain continues to show resilience in the aftermath of the sexual harassment allegations against him that have dominated much of the campaign coverage in the last two weeks.

A new CBS News poll finds Cain losing some support among women and Tea Party supporters, but not enough to knock him out of first place. Cain has 18 percent support in the poll compared to Mitt Romney and Newt Gingrich, who are tied at 15 percent.

Gingrich has been slowly and steadily rising in the polls as Perry and Cain continue to battle significant obstacles to their candidacies.

And with 53 days to go before the Iowa caucuses, candidates are preparing the advertising and organizing end games to carry them through the first votes in the new year.

The Associated Press takes a keen look at Romney’s moment to intensify his push in the critical first-in-the-nation caucuses in Iowa:

Republican presidential candidate Mitt Romney is preparing for a higher profile in Iowa, where he possibly could land a knockout punch if two top rivals don’t quickly fix their campaign problems and back-of-the-pack contenders such as Newt Gingrich don’t move quickly to energize voters.

Romney, the former Massachusetts governor, recently recorded a TV campaign ad at a sheet-metal plant in Dubuque, in eastern Iowa. It’s not shocking that he would prepare such ads. But every Romney step in Iowa intrigues GOP activists.

After a crushingly disappointing loss there in 2008, he sharply lowered expectations in Iowa, whose caucus is less than two months away. If Romney airs ads soon and heavily in the state, it could signal a new strategy built on calculations that his weakened opponents handed him too tempting an opportunity.

The Obama administration may argue that the decision to delay action on a controversial cross-country oil pipeline, known as Keystone XL, was not influenced by politics, but the matter clearly had political implications for the White House.

Environmentalists welcomed the administration’s approach, which puts off a final ruling on the pipeline until 2013, while labor and business interests, which stood to benefit from the $7 billion project, criticized the move.

For their part, Obama administration officials said the pipeline needed to be put on hold to allow more time to review the concerns of Nebraska residents that the project could impact the state’s ecologically sensitive Sand Hills region.

“This decision is based on the process that we have been going through. This is not a political decision,” Kerri-Ann Jones, assistant secretary in the Bureau of Oceans and International Environmental and Scientific Affairs, said Thursday.

“If you look at what’s happening in Nebraska, I think you can see that this is something that has been gathering much more attention, much more public concern, and we don’t have a route that would avoid what many feel is a unique resource in Nebraska, and we feel we need that to make the correct decision.”

President Obama said in a statement Thursday that he supported the announcement, which came from the State Department. “Because this permit decision could affect the health and safety of the American people as well as the environment, and because a number of concerns have been raised through a public process, we should take the time to ensure that all questions are properly addressed and all the potential impacts are properly understood,” the president said.

While environmental advocates rejoiced, the energy industry fumed. “This decision is deeply disappointing and troubling. Whether it will help the president retain his job is unclear, but it will cost thousands of shovel-ready opportunities for American workers,” said Jack Gerard, president of the American Petroleum Institute.

The top Republican in Congress, House Speaker John Boehner, also blasted the decision. “The current project has already been deemed environmentally sound, and calling for a new route is nothing but a thinly-veiled attempt to avoid upsetting the President’s political base before the election,” Rep. Boehner said. “It’s a failure of leadership.”

Not all Republicans were unhappy with the news, though. “This is an exceptional moment for Nebraska,” said the state’s Republican governor, Dave Heineman, reports the Omaha World-Herald. “Concerns from Nebraskans have been heard.”

The relationship between the White House and environmental groups, a key part of the Democratic coalition, have been strained since the collapse of the climate bill in 2010.

So, on Thursday at least, the home to Cornhusker red may have given the president a little cover with his green allies, whose support he’ll need next year. 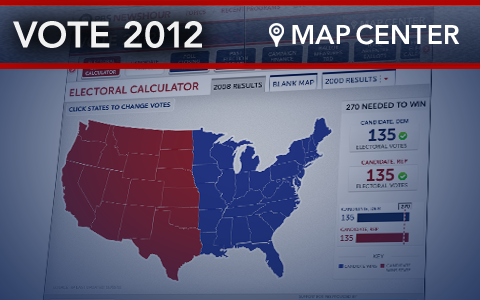 As a Friday treat for our readers, we are proud to debut the PBS NewsHour’s Vote 2012 Map Center. The map features an electoral college calculator, which includes historical data going back to the 1964 election. We give you a blank slate for 2012, so the path to 270 is all in your hands.

Users can also view Patchwork Nation’s breakdown of the nation’s counties by community type by clicking on the “open” tab in the upper right corner of the page.

We’ll be adding many more layers to the Map Center over the course of the campaign, including candidate travel, live primary and election results, economic and demographic data, and content produced by our audience and local PBS stations.

The map interface is designed to work well on tablets and smartphones, as well as on your computer — and you can expect to see it referenced on air as we discuss the ups and downs of the 2012 cycle.

We’ll continue to update the map by adding data and functionality as the 2012 race moves forward, so stay tuned for updates.