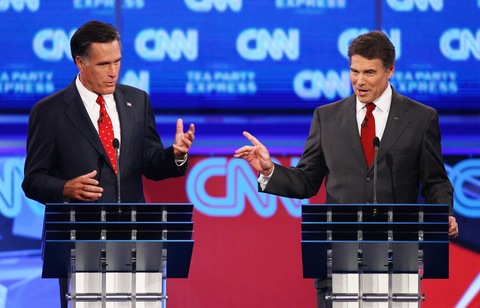 It seems the old saying “Don’t mess with Texas” doesn’t apply to Republican presidential debates, as Texas Gov. Rick Perry spent much of Monday night’s CNN/Tea Party-sponsored event in Tampa, Fla., under withering attack from many of his rivals on the stage.

As was the case in Wednesday’s debate at the Ronald Reagan Presidential Library in Simi Valley, Calif., Perry and former Massachusetts Gov. Mitt Romney clashed repeatedly on issues such as Social Security and who is best equipped to jump-start job creation in the country.

Perry softened his rhetoric on Social Security in Monday night’s forum, holding back his criticism of the program as a “Ponzi scheme” and “monstrous lie.” Instead he sought to reassure current beneficiaries and those nearing retirement that their plans would not be affected.

But Romney refused to give Perry a pass, pushing him to explain his views on how the program should be structured. “The real question is: Does Gov. Perry continue to believe that Social Security should not be a federal program, that it is unconstitutional, and it should be returned to the states, or is he going to retreat from that view?”

“I think we ought to have a conversation,” Perry responded.

“We’re having that right now, governor. We’re running for president,” Romney shot back.

Romney also suggested that the recent success of Texas’ economy had less to do with Perry and more to do with the state’s favorable business climate, including an income tax rate of zero, few regulatory restrictions, a Republican legislature and oil resources.

“I think Gov. Perry would agree with me that if you’re dealt four aces, that doesn’t make you necessarily a great poker player,” Romney quipped.

Perry responded, “Mitt, you were doing pretty good till you got to talking poker,” drawing laughter from the audience of Tea Party activists. Perry noted that Texas had created “over a million jobs” during a “pretty tough economic period.”

Their sparring was expected, and Perry appeared to handle the encounters reasonably well, with the crowd applauding many of his responses.

Perry ran into trouble later in the debate, when he was pressed to defend his decision mandating vaccinations of young girls as well as granting in-state tuition to children of illegal immigrants.

Perry admitted he made a mistake in issuing an executive order requiring 11 and 12-year-old girls to receive a cervical cancer vaccine, which allowed parents to opt-out.

Still, Perry said his intentions were in the right place. “What was driving me was, obviously, making a difference about young people’s lives. Cervical cancer is a horrible way to die. And I happen to think that what we were trying to do was to clearly send the message that we’re going to give moms and dads the opportunity to make that decision with parental opt-out.”

Minnesota Rep. Michele Bachmann, who has been eclipsed by Perry’s entrance into the race, said: “To have innocent little 12-year-old girls be forced to have a government injection through an executive order is just flat-out wrong. That should never be done. That’s a violation of a liberty interest.”

Bachmann also questioned whether contributions to Perry’s gubernatorial campaign from the vaccine’s manufacturer, Merck, had anything to do with the order.

“The question is, is it about life or was it about millions of dollars and potentially billions for a drug company?” Bachmann asked.

Perry responded: “The company was Merck, and it was a $5,000 contribution that I had received from them. I raise about $30 million, and if you’re saying that I can be bought for $5,000, I’m offended.”

Bachmann delivered a forceful retort, which drew loud applause from the audience. “Well, I’m offended for all the little girls and the parents that didn’t have a choice,” the congresswoman said.

Perry was also booed by the Tea Party audience for his defense of a Texas plan that allows children of illegal immigrants who have been in the state for three or more years and are pursuing citizenship to receive in-state tuition.

Former Pennsylvania Sen. Rick Santorum took a shot at Perry over the policy, saying, “Maybe that was an attempt to attract illegal — I mean, the Latino voters.”

It also allowed Romney to come at Perry from the right on immigration. “We are the party of opportunity; we’re also the party of legal, law-abiding citizens,” Romney said.

As long as Perry remains the front-runner for the GOP nomination, he can expect a Texas-sized bull’s-eye affixed to his chest.

In all the coverage surrounding the special election in New York’s 9th Congressional District (Queens/Brooklyn), you might forget that President Obama’s name is not actually on the ballot.

There’s little the White House can do to prevent a loss in a district the president won by 11 points in 2008 from being viewed as emblematic of his larger political woes.

If, indeed, Democratic Assemblyman David Weprin is defeated Tuesday by Republican businessman (and “The Jerry Springer Show” creator) Bob Turner, the White House will, no doubt, seek to provide non-Obama related explanations for the loss.

National Journal’s Marc Ambinder looks at the plans to do so already underway.

To be sure, not knowing the size of the U.S. debt and dropping out of a debate did significant damage to Weprin’s candidacy and is part of the reason he wakes up Tuesday morning as the underdog in an overwhelmingly Democratic district.

Nonetheless, Democrats in the White House and on Capitol Hill are keenly aware that the pervasive pessimism weighing down the president is likely to have a trickle down effect to his party. You need to look no further than Weprin’s awkward attempt at distancing himself from President Obama throughout the course of the campaign.

“On the eve of a special election in the heavily Democratic House district last represented by Anthony D. Weiner, the Republican candidate expressed confidence that an upset was within reach, while his Democratic opponent played down the anxiety in his party and predicted that a strong turnout effort would propel him to victory.”

“Former President Bill Clinton made a slew of last-minute robo calls to try to keep a Republican from winning a vacant congressional seat last held by by disgraced ex-Rep. Anthony Weiner.

There’s much more at stake here for the Democrats than one congressional seat, which is why the Democratic Congressional Campaign Committee has been pumping in hundreds of thousands of dollars in the last couple of weeks.

If Turner emerges victorious, Democrats will have to look elsewhere for which district they will lose because of redistricting. And if this Queens-Brooklyn district is this susceptible to the national political environment, it doesn’t bode well for Democratic chances at winning back the Staten Island-based 13th Congressional District won by Tea Party candidate Michael Grimm in 2010.

Polls close at 9 p.m. ET in New York. Be sure to check here for results.

Arizona Gov. Jan Brewer has set her state’s primary date for Feb. 28, 2012. That date is in violation of Republican National Committee rules that only allow for Iowa, New Hampshire, Nevada, and South Carolina to hold their nominating contests prior to March 6.

“It has always been a priority of mine to ensure that Arizona and its voters play an influential role in the nomination process, and that Southwestern issues are addressed by the candidates in a meaningful fashion,” the Republican governor said in a statement. “I am confident both goals will be realized, given this primary date and the RNC’s preliminary selection of Arizona for a GOP presidential debate.”

In an effort to keep Brewer from jumping to a January primary date, the RNC offered up a party sanctioned debate among the Republican presidential hopefuls to be held in Arizona in December, which will put the state in the spotlight just before the voting process begins.

Though the February date is in violation of party rules, it’s nowhere near as complicating as a January primary would have been. The four early states can move up a bit in response to Arizona’s date, but it’s not likely to send the kickoff caucuses into the Christmas season.

The RNC is not out of the woods yet. Now all eyes turn to Florida and Michigan to see when those states choose to hold their primaries. But Gov. Brewer’s move has brought some clarity to a cloudy process.