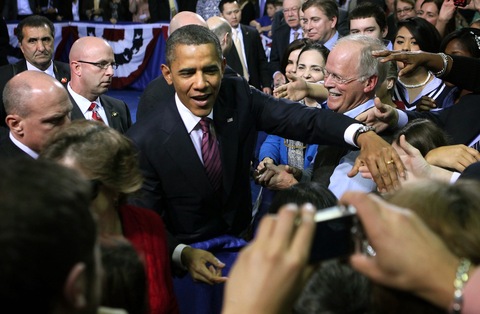 President Obama’s campaign is getting into the super PAC business.

The president’s re-election team announced Monday night that it will openly support Priorities USA Action, a super PAC run by former White House aides Bill Burton and Sean Sweeney to “fill a hole in our side.” Officials said that while Mr. Obama still opposes the Supreme Court’s Citizen’s United decision that opened the floodgates to super PACs, he wants his donors to know he won’t stay out of the game.

“[T]his cycle, our campaign has to face the reality of the law as it currently stands,” Obama campaign manager Jim Messina wrote in a post at BarackObama.com. “We will not play by two sets of rules.”

“With so much at stake, we can’t allow for two sets of rules in this election whereby the Republican nominee is the beneficiary of unlimited spending and Democrats unilaterally disarm,” Messina wrote. That means senior campaign officials and some White House and Cabinet officials will speak at Priorities USA fundraisers but “won’t be soliciting contributions.” Mr. Obama, the first lady and Vice President Joe Biden will not get involved.

Messina also emailed campaign supporters detailing how Republican super PACs spent $18 million on attack ads last year. “We decided to do this because we can’t afford for the work you’re doing in your communities, and the grassroots donations you give to support it, to be destroyed by hundreds of millions of dollars in negative ads,” he wrote.

Burton sent an email to the Priorities USA mailing list with a request for donations and a link to a New York Times story outlining President Obama’s decision. “The new policy was presented to the campaign’s National Finance Committee in a call Monday evening,” Jim Rutenberg and Jeff Zeleny reported in that story.

Colorado, Minnesota and Missouri will get their turn in the spotlight Tuesday, and while the GOP presidential candidates are competing for victories (and the momentum that comes with them), no delegates will actually be awarded based on Tuesday’s results.

Colorado’s 36 delegates will be awarded at district conventions from late-March through mid-April. Minnesota’s 40 delegates will be selected at district conventions between April 14-21. And Missouri’s primary is not only non-binding, it is “not recognized as being a part of any delegate allocation or selection process,” according to the Republican National Committee.

The process for choosing the Show Me State’s 52 delegates will start with precinct caucuses held on March 17. The estimated cost for Tuesday’s “beauty contest” in Missouri? $7 million.

Newt Gingrich is not on the ballot in Missouri after he decided against paying the $1,000 filing fee, contending the contest did not count for delegates. Voting in the state starts at 6 a.m. CT and goes until 7 p.m. CT.

The Minnesota caucuses begin at 7 p.m. CT, while the action in Colorado gets underway at 7 p.m. MT. The Colorado GOP has a helpful FAQ section for caucus-goers on its website.

So, with no delegates at stake, what’s the point of all this?

It’s all about the candidates attempting to wrest some momentum away from GOP front-runner Mitt Romney. Team Santorum thinks the former Pennsylvania senator has a chance after looking at a handful of polls. But it’s a long way to 1,144.

The Washington Post has a snapshot of the delegate count, but keep in mind that these numbers will not change after Tuesday night.

The NewsHour will look at the delegate math this week.

Judy Woodruff sat down with Speaker of the House John Boehner, R-Ohio, in his ceremonial office Monday night to talk about the Republican agenda and his goal of getting a grand bargain on cutting the deficit.

Among the highlights, Rep. Boehner told Judy (@judywoodruff) that Congress is “not as dysfunctional as people think.”

He boasted that a new highway bill would have no earmarks, comparing it to the last measure that had 6,317 of them.

Boehner disclosed that after saying recently he hadn’t spoke with the president in a while, the two talked last week. From the interview:

Judy: President Obama has had his own ups and downs in the polls. How would you describe your relationship with him?

Boehner: The president and I get along fine. We really do. We have a very cordial relationship. Doesn’t mean we agree on everything, but the president and I have had a lot of frank conversations about the big issues that our country’s facing. And whether it was the issue of the debt, whether it was the issue of foreign policy or our defense posture, we’ve had a lot of very good discussions. Unfortunately, we’ve not seen a lot of results.

Judy: How recently have you spoken with him?

Boehner: I talked to him this last week.

Judy: You want to tell me about what?

Judy: Well, it appeared to the public last summer that you and he were pretty close to a deal on the debt ceiling — both big budget cuts, tax increases — but that you were, in effect, held back by your own membership. Is that what happened?

Boehner: No, no. I was more than willing to put revenues on the table. I thought if we reformed our tax system, we could produce more revenue from it. But I told the president, I’m not going to put more revenue on the table unless you’re willing to make real changes to our entitlement programs because in their current form, they’re not sustainable.

The president would never say yes to any of those changes to the entitlement programs. And even though I had revenue on the table and the president hadn’t said yes, he came back and wanted $500 billion more in revenue. There is a way to do this, but it takes courage. And I am more than willing to address this problem at any moment with the president, because the future of our country depends on us coming to an agreement that will begin to solve our debt problem.

Judy also asked the speaker about the tone of the presidential campaign. He said he isn’t too worried. “Well, no one likes to see nasty campaigns,” Boehner said. “But I would remind you that the fight in 2008 between Barack Obama and Hillary Clinton went on through June of that year. And so while I rather not see it, it’s part of the political process. Out of this will come our nominee. And I don’t think it’ll have any impact on the November election.”

Judy asked if the candidates should “tone it down.”

“Listen, I’m not going to tell them what to do. That’s not my job,” Boehner said, later adding just after the interview, “Time heals all wounds.”

Intrade Update: Obama continues upward swing – now trading at 58% to be re-elected in Nov, up from 50% a month ago: bit.ly/oexmwE