A bipartisan report released by the Senate on Tuesday details failures across the U.S. government, military, and law enforcement to properly plan for and respond to the deadly Jan. 6 attack on the Capitol.

Read the full text of the report below: 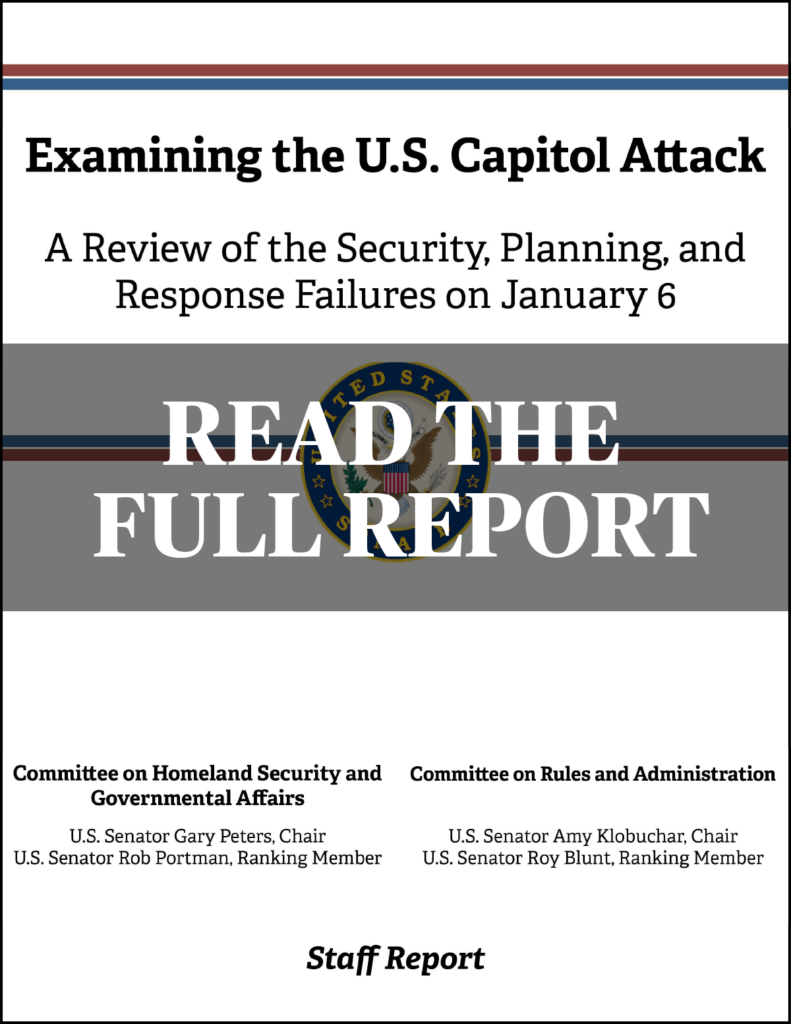 The report, which was compiled by members of the Senate Committee on Homeland Security and Government Affairs and the Committee on Rules and Administration, uncovered a number of missteps that allowed the U.S. Capitol to be breached by a violent pro-Trump mob on the day Congress gathered to count votes certifying President Joe Biden’s election victory.

It includes new details about the damage inflicted upon law enforcement members who responded to the attack, finding that more than 140 reported injuries including brain trauma and broken ribs, as well as burns and lung complications.

Among the key findings of the report are the following:

The report details how Capitol Police chief Steven Sund failed to submit a formal request to the Capitol Police Board for National Guard support before the events of Jan. 6. As a result, there were significant delays when Sund sought to obtain the necessary approvals to activate the D.C. National Guard when violence broke out that day.

While a “workable” request was received by the Department of Defense at 2:30 p.m., the D.C. National Guard did not actually arrive until 5:20 p.m.– more than four hours after insurrectionists stormed the Capitol. During this time, multiple agencies were working through a number of bureaucratic hurdles to actually release the troops.

The Senate committees laid out a number of recommendations in the report for law enforcement and government agencies involved in the Jan. 6 attack to avoid such security failures in the future. The recommendations include giving the Capitol Police chief more authority to request assistance from the National Guard in emergency situations, providing Capitol Police with more personnel, training and equipment to do their job, and having intelligence agencies review and streamline the ways they evaluate and communicate threats.

Republicans blocked an effort to establish a bipartisan commission to investigate the Jan. 6 attack, and Sen. Roy Blunt of Missouri, the top GOP leader on the Rules committee, said he believed the recommended changes laid out in the report could be implemented faster.

“These recommendations are based on an extensive fact-finding effort that included interviews with key decision makers, firsthand accounts from law enforcement personnel, and the review of thousands of documents,” Blunt said in a statement released by the bipartisan committee. “Our focus now should be on immediately implementing these recommendations.”

Why efforts to establish a commission to investigate the Jan. 6 insurrection failed