WASHINGTON (AP) — It started with a warning to watch her back, that people were “looking to hurt” her. From there, former U.S. Ambassador to Ukraine Marie Yovanovitch told House investigators, it escalated into a chilling campaign to fire her as President Donald Trump and his allies angled in Eastern Europe for political advantage at home.

Testimony from Yovanovitch, released Monday, offered a first word-for-word look at the closed-door House impeachment hearings. Inside, Democrats and Republicans are waging a pitched battle over what to make of Trump’s efforts to get Ukraine’s leaders to investigate political rival Joe Biden, Biden’s son and Democratic activities in the 2016 election.

The transcript came out on the same day that four Trump administration officials defied subpoenas to testify, acting on orders from a White House that is fighting the impeachment investigation with all its might. Among those refusing to testify: John Eisenberg, the lead lawyer at the National Security Council and, by some accounts, the man who ordered a rough transcript of Trump’s phone call with Ukraine’s leader moved to a highly restricted computer system. 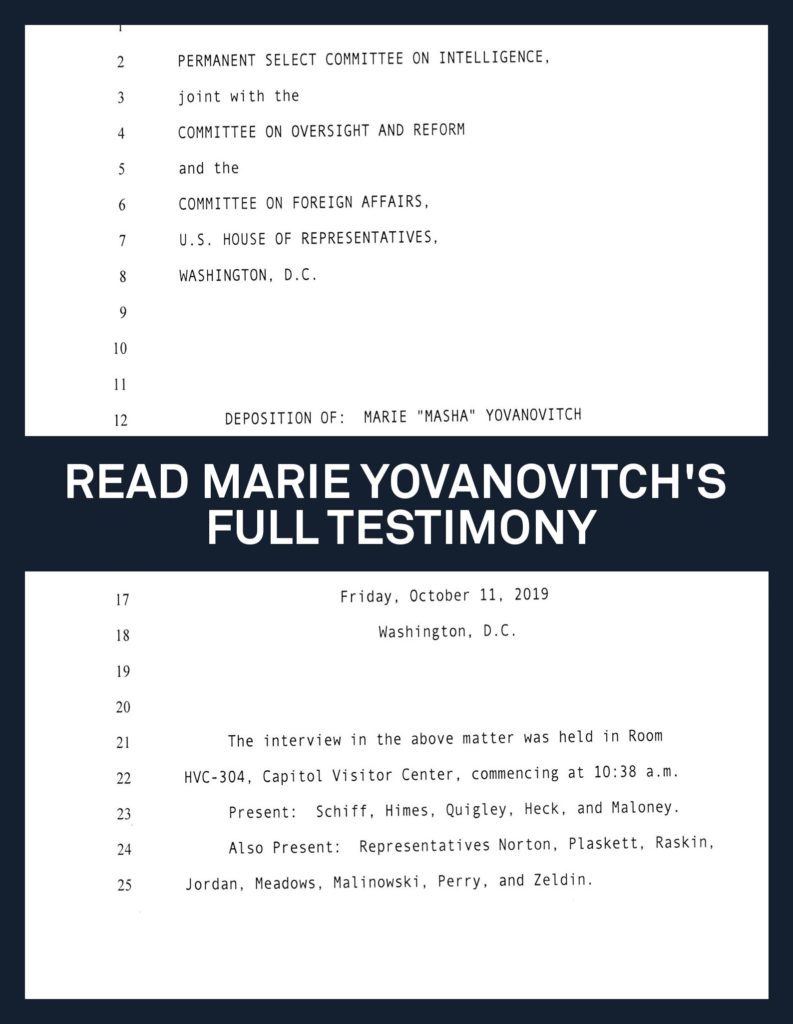 During nine hours of sometimes emotional testimony, Yovanovitch detailed efforts led by Rudy Giuliani and other Trump allies to push her out of her post. The career diplomat, who was recalled from her job in May on Trump’s orders, testified that a senior Ukrainian official told her that “I really needed to watch my back.”

While the major thrust of Yovanovitch’s testimony was revealed in her opening statement, Monday’s 317-page transcript provided new details.

Yovanovitch offered significant threads of information including the possibility that Trump was directly involved in a phone call with Giuliani, the president’s personal lawyer, and the Ukrainians dating back to January 2018. And she pushed back on Republican suggestions that she harbored opposition to Trump.

She had been recalled from Kyiv before the July 25 phone call between Trump and Ukrainian President Volodymyr Zelenskiy that’s at the center of the impeachment inquiry. Later, she was “surprised and dismayed” by what she saw in the transcript of the call — including that Trump had called her “bad news.” He also said that “she’s going to go through some things.”

“I was shocked,” Yovanovitch said, to see “that the president would speak about me or any ambassador in that way to a foreign counterpart.”

Asked about her as he left on a campaign trip Monday, Trump had a more equivocal comment: “I’m sure she’s a very fine woman. I just don’t know much about her.”

House Intelligence Committee Chairman Adam Schiff said transcripts from the hearings are being released so “the American public will begin to see for themselves.” Two were released Monday, and more are coming.

Republicans have accused Democrats of conducting a one-sided process behind closed doors.

But the transcripts show GOP lawmakers were given time for questioning, which they used to poke at different aspects of the impeachment inquiry. Some Republicans criticized the process as unfair, while others tried to redirect witnesses to their own questions about Biden’s work on Ukraine corruption issues while he was vice president.

In public, some Republicans say the president’s actions toward Ukraine, though not ideal, are certainly not impeachable.

Rep. Jim Jordan of Ohio, the top Republican on the Oversight committee, defended Yovanovitch’s ouster as clearly within the president’s prerogative.

“President Trump has the authority to name who he wants in any ambassador position. That’s a call solely for the president of the United States as the commander in chief,” Jordan said.

Yovanovitch was recalled from Kyiv as Giuliani pressed Ukrainian officials to investigate baseless corruption allegations against Biden and his son Hunter, who was involved with Burisma, a gas company there.

Giuliani’s role in Ukraine was central to Yovanovitch’s testimony. She said she was aware of an interest by the Trump lawyer and his associates in investigating Biden and Burisma “with a view to finding things that could be possibly damaging to a presidential run,” as well as investigating the 2016 election and theories that it was Ukraine, and not Russia, that interfered.

However, asked directly if Giuliani was promoting investigations on Burisma and Biden, Yovanovitch said, “It wasn’t entirely clear to me what was going on.”

More directly, she drew a link between Giuliani and two businessmen — Lev Parnas and Igor Fruman, who have been indicted in the U.S. on charges stemming from campaign donations — as part of the campaign to oust her. She understood they were looking to expand their business interests in Ukraine “and that they needed a better ambassador to sort of facilitate their business’ efforts here.”

Yovanovitch said was told by Ukrainian officials last November or December that Giuliani was in touch with Ukraine’s former top prosecutor, Yuriy Lutsenko, “and that they had plans, and that they were going to, you know, do things, including to me.”

She said she was told Lutsenko “was looking to hurt me in the U.S.”

The diplomat said she sought advice from Gordon Sondland, Trump’s ambassador to the European Union, after an article appeared in The Hill newspaper about Giuliani’s complaints against her. Sondland told her, “‘You need to go big or go home,” advising her to “tweet out there that you support the president.”

Yovanovitch said she felt she could not follow that advice as a nonpartisan government official.

The former envoy stressed to investigators that she was not disloyal to the president. She answered “no” when asked point blank if she’d ever “badmouthed” Trump in Ukraine, and said she felt U.S. policy in Ukraine “actually got stronger” because of Trump’s decision to provide lethal assistance to the country — military aid that later was held up by the White House as it pushed for investigations into Trump’s political foes.

Long hours into her testimony, Yovanovitch was asked why she was such “a thorn in their side” that Giuliani and others wanted her fired.

Yovanovitch, still employed by the State Department, is in a fellowship at Georgetown University.

She told the investigators that the campaign against her, which included an article that was retweeted by Donald Trump Jr., undermined her ability to serve as a credible ambassador and she wanted Secretary of State Mike Pompeo to issue a statement defending her. But no statement was issued.

McKinley, a 37-year career diplomat, testified that he decided to resign from his post as a senior adviser to Pompeo after his repeated efforts to get the State Department to issue a statement of support for Yovanovitch after the transcript of the Trump-Zelenskiy phone call was released. “To see the impugning of somebody I know to be a serious, committed colleague in the manner that it was done raised alarm bells for me,” he said.

McKinley said he was already concerned about politicization at the State Department, and that the refusal to publicly back Yovanovitch convinced him it was time to leave.