A Louisiana law requiring doctors who perform abortions to obtain admitting privileges at a nearby hospital “is unconstitutional,” a majority of justices on the Supreme Court ruled Monday.

In a 5-4 decision in the case, called June Medical Services LLC v. Russo, Chief Justice John Roberts joined with the four liberal justices on the court to form the majority. The high court agreed with a lower District Court ruling that the state’s law posed a major obstacle to women seeking abortions, did not provide any significant health benefits and imposed an “undue burden” on a woman’s right to choose to undergo an abortion. The Supreme Court first ruled that a woman had a constitutional right to have an abortion in the 1973 case Roe v. Wade.

Justice Stephen Breyer, in his opinion for the Supreme Court, also noted that the Louisiana law was “almost word-for-word identical” to a Texas law that the justices struck down in a 2016 case called Whole Woman’s Health v. Hellerstedt.

“This case is similar to, nearly identical with, Whole Woman’s Health. And the law must consequently reach a similar conclusion,” Breyer wrote.

Roberts, who dissented in the 2016 case, noted the Supreme Court’s precedent in his concurring opinion: “The Louisiana law imposes a burden on access to abortion just as severe as that imposed by the Texas law, for the same reasons. Therefore Louisiana’s law cannot stand under our precedents.”

In one of the four dissenting opinions on the case, Justice Clarence Thomas wrote that the Supreme Court has “neither jurisdiction nor constitutional authority to declare Louisiana’s duly enacted law unconstitutional.”

In February 2019, the Court blocked the Louisiana law from going into effect, pending a review of the case. The Court agreed to hear the case in October.

Read the Supreme Court’s full decision, including a summary of the case, the opinions by Breyer and Roberts, and dissents from Thomas, Samuel Alito, Neil Gorsuch and Brett Kavannaugh, below. 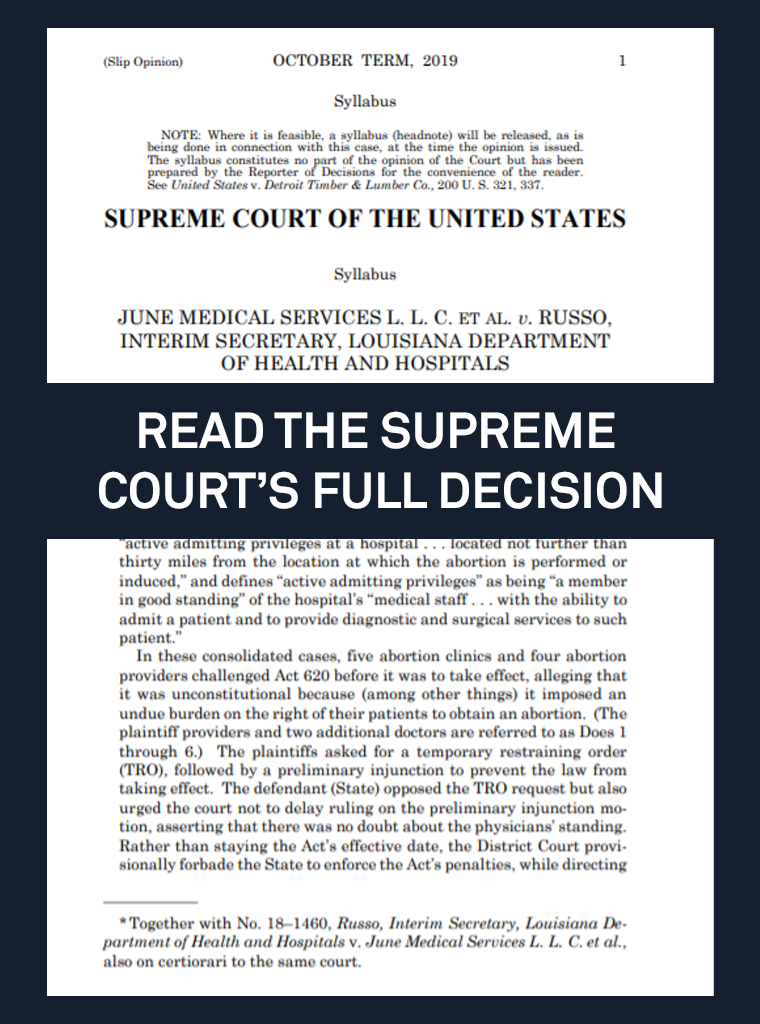