Despite safety concerns and a legal battle over holding an election during the coronavirus pandemic, turnout in Wisconsin’s Democratic presidential primary this month was roughly the same as in recent election cycles, driven by a state record for absentee ballots and thousands of people who still went to the polls amid the public health crisis.

Up until the day before the election, it was unclear whether voting would even take place. Democrats, led by Wisconsin Gov. Tony Evers, pushed to delay the election for public health reasons, but Republicans opposed the delay and the political fight spilled into the courts. In a pair of last-minute rulings, the state Supreme Court and the U.S. Supreme Court ruled that the election would proceed as planned on April 7.

Ultimately, a total of 924,151 people voted in the Democratic presidential primary — down from approximately 1 million votes in the state’s 2016 primary race and 1.1 million in 2008.

Former Vice President Joe Biden beat Sen. Bernie Sanders by a wide margin, in what turned out to be the last contested primary of the year. Sanders dropped out of the race the day after the election. Sanders endorsed Biden on Monday, the day the state released the election results.

Wisconsin also held statewide and local elections on the same day as the primary, and turnout surged in a closely watched race for a seat on the state’s Supreme Court. Turnout topped 1.5 million, the second-highest total for a state Supreme Court election in Wisconsin in two decades.

Overall, nearly 1.1 million voters mailed in absentee ballots out of a total 1.5 million votes cast, according to state election data — a major increase from previous elections and a record for Wisconsin. The state has not yet released more detailed statistics for absentee ballots, but it was clear from the initial returns that in-person voting was down across the state.

The primary came in the midst of a monthlong stay-at-home order in Wisconsin. Nevertheless, thousands of voters did show up at the polls, waiting in line for hours in some parts of the state. Many wore face masks and stood several feet apart as they waited to vote, observing social distancing guidelines for avoiding the spread of the coronavirus, which causes the COVID-19 illness.

“People really were risking their health and their safety and their lives in order to exercise their right to vote,” Jill Karofsky, a district court judge and the winner of the state Supreme Court race, said in a phone interview.

Cities across the state consolidated polling locations due to a lack of poll workers and concerns that in-person turnout would be lower than expected. Milwaukee, which usually has 181 polling sites, had just five in operation on April 7.

Green Bay had just two polling sites open, down from around 30. “We ended up with lines lasting over four hours. People who couldn’t wait that long left and didn’t get a chance to vote,” said Bill Galvin, an alderperson on the Green Bay Common Council. 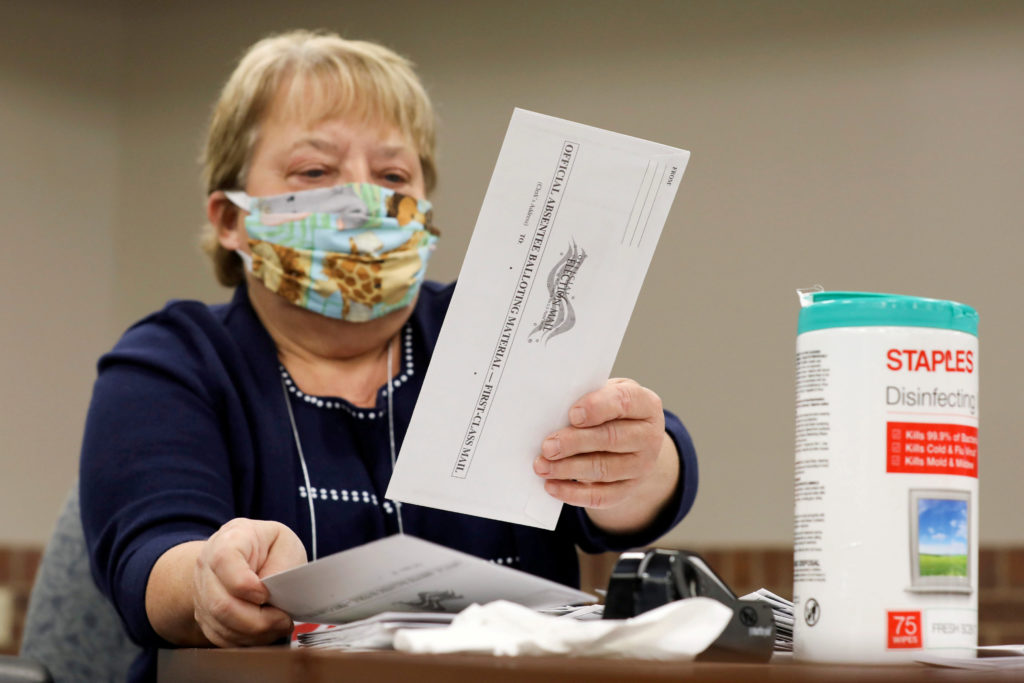 Election volunteer Nancy Gavney verifies voter and witness signatures on absentee ballots as they are counted at the City Hall during the presidential primary election in Beloit, Wisconsin, on April 7, 2020. REUTERS/Daniel Acker

Elsewhere, the lines were shorter and there was less crowding. The city of Kenosha closed half of its 21 polling sites, said Bill Siel, a city official, and there were fewer issues with long lines at polling sites in the city.

But Siel and other officials said in-person voting should not have taken place at all during the pandemic, particularly because it happened during the state-wide stay-at-home order.

“We’re waiting to see if there will be a spike [in coronavirus cases] from all that contact” at polling sites, Siel said. “I definitely think there could have been a much better way to conduct this election.”

In the fight by Democrats to delay the primary, Republicans argued that expanding absentee voting was impractical and could lead to voter fraud. Democrats claimed Republicans wanted the election to proceed as planned because it would lead to lower turnout and help GOP candidates in state and local elections.

The state was hurt by the “chaos and pandemonium at the end, and different confusing court orders that came out,” said Mark Graul, a Republican strategist in Wisconsin. The final turnout was all the more impressive given the challenges surrounding the election, he added.

“The fact that we were able to pull this election off under these circumstances, with this turnout, was remarkable,” Graul said.

Others said Wisconsin was a cautionary tale for states that haven’t held elections yet this year. Several states moved their primaries to June in response to the public health crisis.

“States that have not had their primary elections yet need to take a good hard look at everything that went right and wrong in Wisconsin and make some real tough decisions,” said Galvin.

Charles Franklin, the director of the Marquette Law School Poll, said the results in Wisconsin proved voter enthusiasm remains high despite the pandemic. “We saw the potential here for absentee voting substantially driven by the voters themselves,” Franklin said.

Left: An election worker walks between lines of voters at Hamilton High School during the presidential primary election, held amid the coronavirus disease (COVID-19) outbreak in Milwaukee, Wisconsin, on April 7, 2020. REUTERS/Daniel Acke