Rep. Elaine Luria is in a vulnerable House seat. She stood in favor of the impeachment inquiry anyway.

WILLIAMSBURG, Virginia — When Rep. Elaine Luria decided to publicly support the impeachment inquiry into President Donald Trump, she prepared for the public backlash.

Now that House investigators have begun public hearings for the inquiry this week as part of their efforts to determine whether President violated his oath of office, the pressure is on centrist Democrats who are putting their political futures at risk by supporting it.

Under the national spotlight, Rep. Elaine Luria juggles questions on impeachment with her daily legislative work. In an interview with PBS NewsHour the week before public impeachment hearings began, Luria appeared unbothered by the possibility of losing her seat. She represents Virginia’s 2nd congressional district.

“People sent me to Washington to make hard choices,” Luria said. “I think that I made the right decision. I don’t care if that means I don’t get reelected in 2020. I want to be able to say I was on the right side of history.”

Luria’s win in 2018 was the first time since 2008 that a Democrat was elected to that seat. She defeated the Republican incumbent, winning 51.1 percent of the vote. Her precarious position in one of the state’s most competitive districts became a focal point in September, when she joined six other moderate Democrats to express support for the inquiry in a Washington Post op-ed.

I think that I made the right decision. I don’t care if that means I don’t get reelected in 2020.

The move marked a notable shift for a group of vulnerable new lawmakers who previously hesitated to call for an impeachment inquiry. Their backing helped persuade House Speaker Nancy Pelosi to announce an official probe into Trump’s efforts to push Ukraine to investigate his 2020 political rival, former vice president Joe Biden and his son, Hunter. When news of the inquiry exploded around the country, Luria faced a new level of scrutiny from her conservative constituents. Hundreds of calls poured into her office in the days following the Washington Post op-ed. Residents shared their fervent support and strong criticism of the House investigation on her social media.

“You lost my vote, Congresswomen, supporting this impeachment inquiry because I believe it to be a partisan show,” one user wrote on Luria’s Facebook page in September. PBS NewsHour reached out for comment from the user, but has not heard back.

But Luria is not backing down. On Monday, she released an ad that shows her reciting the Congressional Oath of Office interspersed with media clips discussing Trump’s actions in Ukraine and her background as a veteran. The retired Navy commander told reporters last week that she has now seen enough evidence to support impeachment, if it comes to a vote.

So far that conviction appears working in her favor. Despite predictions that Democrats in Trump-supporting districts would face overwhelming public pushback for supporting the inquiry, many reactions throughout the country have remained temperate. Some are also outraising their 2020 Republican challengers.

Voters want their leaders to help guide them through this stressful time, said Jesse Ferguson, a Democratic strategist who worked for Hillary Clinton during her 2016 presidential campaign. “The more that she is focused on putting the country ahead of her own political interests, even those voters who may not agree with her yet are open to supporting her for doing the right thing,” Ferguson said.

That appeared to be Luria’s strategy recently as she held her first major meeting with constituents since House lawmakers voted to formalize a new public phase of the impeachment inquiry in October.

At the Williamsburg Library, located in a liberal section of the district just off the William & Mary college campus, a majority of the 200-person crowd greeted Luria with a standing ovation–with impeachment seemingly far from mind. 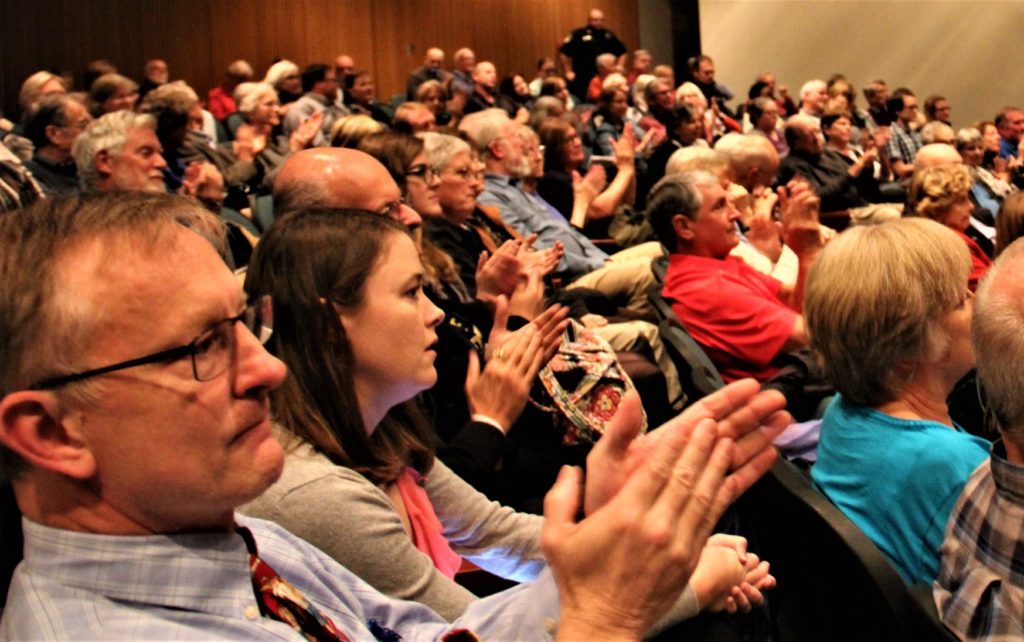 During interviews with PBS NewsHour the week before the public hearings began, no constituents even mentioned the impeachment inquiry unless specifically asked about it. Among their most pressing issues? The environment, the local economy and health care.

Jim Cull, a retired Williamsburg resident, did not vote for Luria in 2018, but attended the town hall to hear more about how Congress is addressing social security and Medicare.

“I was surprised that Congresswoman Luria wasn’t more informed about health care and the needs of seniors in her constituency,” Cull said. “Almost one-third of her constituency is over 55.” He said he is open to her perspective and plans to follow up with her office.

Regina Barrientos, a full-time caregiver who voted for Luria’s Republican opponent in 2018, wanted to hear more about the congresswoman’s views on late-term abortion, economic opportunities and the border wall. She expressed concern about Luria’s ability to work with President Trump and stand apart from her fellow Democrats.

For the town hall, Luria’s office requested written questions, which were then divided up by subject: health care, environment, veteran affairs and miscellaneous.

Impeachment didn’t come up at the generally cordial meeting until the end, when a question on the inquiry sparked a fierce exchange between the congresswoman and a woman shouting from the audience.

“We are following a process outlined in the Constitution of the United States,” Luria said after the audience member interrupted her, calling for due process. “You might have some conspiracy theory that this is happening behind closed doors without both parties there, but both parties are present. Both parties are participating. Both parties have equal amount of time to question witnesses…”

“That is a lie,” the woman interjected again.

“That’s not a lie,” Luria fired back. “Democratic and Republican colleagues on three committees — the Intelligence Committee, the Oversight Committee and the Judiciary Committee — are fully participating in these hearings behind closed doors to get the information out, and what have they done? Have you read all of the transcripts? How do you sleep at night, ma’am, reading these transcripts? I’m not sure how you sleep at night reading these transcripts and seeing how the president of the United States has abused his office for personal gain.”

The room erupted in cheers and applause. But despite the overwhelming support for Luria that night, the subject of impeachment attracts strong criticism from others in her district. Cull said he believes the process being run by Democrats is a “sham” that distracts from other important issues voters care about.

“[Trump] didn’t do anything to our country at all. I think the Democrats should be focusing on the country, and their constituents, and what we need done versus what they want to do.”

But others feel differently.

“I was wary of impeaching [Trump] at first. I thought that would make a martyr out of him,” said Kathleen Kollman from Williamsburg. “But then calling a foreign government and shaking them down to get dirt on a political enemy? That’s just too far. I know the Senate won’t remove him, but he needs to suffer some consequence.”

Nearing the end of her first year in office, the prospect of Luria’s reelection is bolstered by major victories in Virginia’s state legislative races, giving Democrats a trifecta majority for the first time since 1993. Still, Republicans are targeting her district heading into 2020, and Republican Navy veteran Ben Loyola announced a bid to challenge Luria on Monday. It may not be an easy match, but the gamble could pay off.

Left: Rep. Elaine Luria (D-VA) speaks about the formation of the Congressional Servicewomen and Women Veterans Caucus on Capitol Hill in Washington, U.S., May 15, 2019. By Joshua Roberts/Reuters.