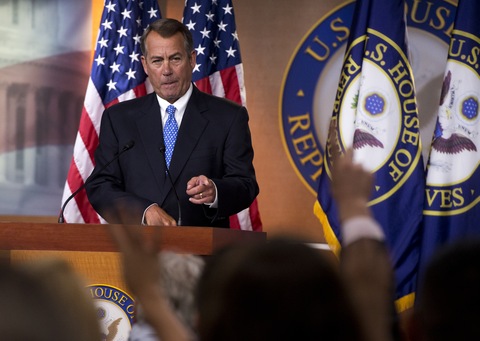 Lawmakers are headed for a clash of political will over funding the implementation of President Barack Obama’s signature health care law.

The government is funded through Sept. 30, which means there is little time to craft a new spending plan, and it seems the only agreement on the topic is that it’s going to be an ugly fight.

80 House Republicans have signed a letter to Speaker John Boehner demanding the funds for Obamacare be left out of the next continuing resolution to keep the government funded after Oct. 1.

A measure like that is far from certain to pass, and certainly would not receive the president’s signature. So, the result of the gamble could be a government shutdown, which is one reason Boehner and others are trying to stop the movement from growing. Boehner warned colleagues last week on a conference call that his recommendation will be to put forward a short-term spending measure that keeps funding at its current levels — including funding for health care implementation and across-the-board sequester cuts.

The speaker “pressed gingerly for a straight short-term extension of funds to avoid an immediate government shutdown in October, but faced immediate opposition from conservatives demanding that funds be stripped from the health care law,” the New York Times’ Jonathan Weisman reported last week. More from his story:

One thought is to use a short-term spending bill to keep the government running into November, when Congress must raise the government’s statutory borrowing limit. That way, with both a debt default and government shutdown looming, Republicans could apply maximum pressure on the White House to either agree to scuttle President Obama’s health care law or accept significant changes in programs like Medicare and Social Security.

Boehner’s warnings have been echoed by senior GOP lawmakers who fear that a threatened or actual government shutdown will lead to political blowback and a headache the party doesn’t need heading into the 2014 midterm elections.

The fervor is the backdrop for a planned Thursday meeting at the White House. Several Senate Republicans attempting to negotiate a deal on fiscal issues are meeting with top aides. The president’s schedule is clear, so don’t be surprised if he pops in on that meeting.

But any Senate Republicans willing to work with Mr. Obama on spending will have to face a small but fervent group from their own party. Several conservatives have spent the August recess drumming up support back home for zeroing out the health care implementation funding.

At a town hall meeting with supporters last week, Sen. Mike Lee, R-Utah, told supporters that shutdown talk is “a false narrative based on an absolute lie that has been perpetuated by the political ruling class elite in Washington, D.C., that’s been dutifully reported by an all-too-willing-to-comply media…”

Lee insisted that he doesn’t want a shutdown and isn’t calling for one. “In fact, the whole reason I am bringing this forward is to avoid a shutdown,” he said.

Sen. Ted Cruz, R-Texas, Sunday on CNN called for a “grass-roots tsunami” to back his push in the Senate chamber to end Obamacare funding, admitting he does not have enough votes.

Calling the health care law “threatening the future” of his constituents and their children and grandchildren, Rubio said every day he gets a new example of how the law is “hurting” working-class Americans. His op-ed didn’t mention the shutdown threat.

This September, Congress will have to debate and pass a short-term budget. We should not approve one that spends a single cent to implement Obamacare. We should not waste another taxpayer dollar to force this destructive plan on our seniors, employers and middle-class workers. It is unfortunate that the president and his allies would seemingly take our government to the brink in order to compel us to fund his disastrous health care law …

Defunding Obamacare in the short-term budget is the first step to rejecting the diminished future Obamacare guarantees, while restoring the free market principles that have made our economy the envy of the world and that offer the best way to reform our health care system.

The tone he strikes in the piece is a sharp difference from how Rubio was out defending immigration reform earlier this year.

As talk of the spending showdown increases, it’s foreign affairs that has the White House most concerned. The administration is facing mounting pressure to take action in Syria after officials said there was clear evidence of a chemical weapons attack. Expect that to be a major focus this week. We’ll explore it in detail on the NewsHour Monday.

And now, something light.

Anyone paying attention for the last five years may have noticed the president enjoys sports. From the basketball courts to the links, Mr. Obama gets really into playing, and he’s also the sports-fan-in-chief.

The NewsHour put together a short report on the phenomenon. Watch here or below:

What is Bashar al Assad hiding? The world is demanding an independent investigation of Wednesday’s apparent CW attack. Immediately.

Part of the #NSYNC generation? You should pay attention to how Obamacare will affect you: http://t.co/hzr79ksiz3

Happy 55th @benschilibowl! We might have to take a cue from @cbellantoni & get ourselves a Half Smoke to celebrate http://t.co/sMTP04kiGs

Glad I, uh, got my question in during today’s WH briefing. pic.twitter.com/aunkoRiDvV

A lady accidentally dumped jumbo bag of Cheetos on me during flight today. I did not look good in Cheetos orange. But I tasted delicious.

May have to go here for a 5-lb. gummy bear, but grammatically opposed to its name: http://t.co/iAqRJ0MHuc