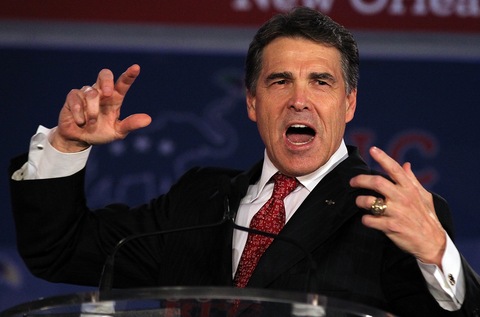 Texas Gov. Rick Perry is clearly seeking to “fix” a political problem he created for himself in the last Republican presidential debate.

The front-runner for the GOP nomination previews his adjusted approach to talking about Social Security in an op-ed in Monday’s USA Today in which he refers to “fixing” Social Security no fewer than four times.

“The first step to fixing a problem is honestly admitting there is a problem. America’s goal must be to fix Social Security by making it more financially sound and sustainable for the long term. But Americans deserve a frank and honest discussion of the dire financial challenges facing the nearly 80-year-old program,” writes Perry.

“We must have a frank, honest national conversation about fixing Social Security to protect benefits for those at or near retirement while keeping faith with younger generations, who are being asked to pay,” he adds, in a clear shift from the way he has talked about one of the most politically popular government programs in history.

Gone is talk of Social Security as a “Ponzi scheme” or a “monstrous lie.” Perry is now trying to paint himself as a tough truth teller on the issue, but not someone willing to abolish the program entirely. He also makes sure to assuage concerns among seniors that he wants to protect current beneficiaries or those near retirement.

All of this is to say that Mitt Romney’s offensive on this issue has clearly worked. It knocked the front-runner off his game a bit and caused him to adjust.

However, once Perry adopts this new language in Monday’s debate, it will be harder for Romney to continue to hammer at this single issue or see it as the silver bullet to take Perry down.

The same eight Republican presidential hopefuls who shared a stage at the Reagan Library last week will do so again Monday at 8 p.m. ET at the Florida State Fairgrounds in Tampa. The Tea Party will have a big voice in the debate, as the Tea Party Express pairs up with CNN as co-hosts of the event and questions from Tea Party gatherings from around the country will be incorporated.

Last Thursday, President Obama delivered a speech to a joint session of Congress detailing his $447 billion plan for job creation. Monday, he intends to deliver the bill to lawmakers.

The president will make an appearance in the Rose Garden at 10:40 a.m. ET to announce that he is sending the American Jobs Act to Capitol Hill Monday evening.

The proposal aims to jolt the sputtering economy through a mixture of tax cuts, infrastructure spending and direct aid to state and local governments.

President Obama will be joined at the event by teachers, police officers, firefighters, construction workers, small business owners and veterans.

The Rose Garden announcement is part of an aggressive effort by the president to sell the jobs plan, which started last Friday with an event at the University of Richmond in Virginia and will continue this week with stops in Columbus, Ohio, and the Raleigh-Durham area of North Carolina.

Those three cities plus 11 others are also part of the first round of advertising by the Democratic National Committee in support of the plan.

There are two versions of the ad running in each market, with one highlighting specific provisions from the plan in text on the screen. Both use a line from the president’s speech Thursday: “The next election is 14 months away. And the people who sent us here — the people who hired us to work for them — they don’t have the luxury of waiting 14 months.”

The DNC has also unveiled a website to promote the jobs plan, which includes a six-page overview document, breakdowns of how the measure will impact women, Latinos, African-Americans and low-income families, and a link to an automated email letter that voters can fill out and send to members of Congress.

It’s a different poll but the same result for David Weprin.

PPP suggests that President Obama’s sagging approval rating in the traditionally Democratic district — just 31 percent approve compared with 56 percent who disapprove — could be dragging down Weprin’s standing among voters.

The Washington Post’s Chris Cillizza writes that the president might not be entirely to blame for Weprin’s struggles, noting that the district has been trending Republican in recent years. He also makes the point that the candidate himself deserves some of the blame.

“Weprin is something (well) short of a star candidate, a sort of last-man-standing pick after many preferred candidates took a pass. New York’s congressional delegation is shrinking by two seats because of slower population growth than the national average over the past decade, and many Empire State political observers expect this district to be eliminated in short order.

“Weprin, then, was perhaps the only man who wanted the job. But his lack of campaign skills — he guessed that the national debt was $4 trillion (it’s $14 trillion) and oddly dropped out of a debate at the last minute, citing Hurricane Irene — has created a gaffe-prone image that has further complicated Democrats’ efforts in the district. That he can be linked to the unpopular state capital of Albany — and that he voted in favor of Democratic Gov. Andrew Cuomo’s legislation that legalized same-sex marriage in the state — only compounds the problem.”