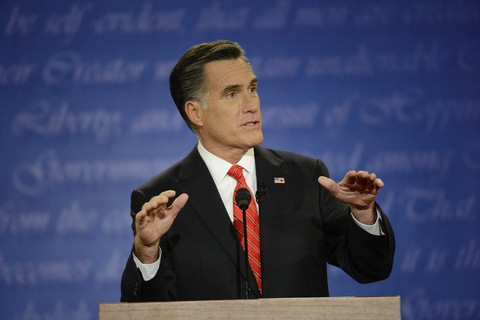 It’s early, but Mitt Romney’s October is starting to look much better than his September.

The Republican presidential nominee went on the offensive against President Obama at their first debate Wednesday evening in Denver, sharply criticizing the Democrat’s stewardship of the economy. The aggressive posture came after weeks of the former Massachusetts governor playing defense over his comments about 47 percent of Americans being “dependent” on government and seeing themselves as “victims.”

Mr. Obama never seized on those statements during the 90-minute face-off, but he did suggest that Romney offered a starkly different visions for the country than his own.

“Are we going to double down on the top-down economic policies that helped to get us into this mess,” the president asked. “Or do we embrace a new economic patriotism that says America does best when the middle class does best?”

Romney countered there was “extraordinary” evidence the president’s policies have been unsuccessful at boosting the economy. “Going forward with the status quo is not going to cut it for the American people who are struggling today,” he said. “Under the president’s policies, middle-income Americans have been buried. They’re just being crushed. Middle-income Americans have seen their income come down by $4,300. This is a tax in and of itself. I’ll call it the economy tax.”

The two candidates also sparred over tax policy, energy, health reform and the role of government.

Romney accused the president of favoring green energy over more traditional sources. He mentioned the bankrupt solar panel manufacturer Solyndra, which borrowed $535 million from the government before going under. “I had a friend who said you don’t just pick the winners and losers, you pick the losers,” Romney said.

The president, meanwhile, charged that Romney had failed to provide specifics on many of his proposals including taxes, health care and financial reform.

“At some point, I think the American people have to ask themselves, is the reason that Gov. Romney is keeping all these plans to replace secret because they’re too good? Is it because that somehow middle-class families are going to benefit too much from them? No,” said the president.

On the whole, however, Romney appeared to get the better of Wednesday night’s encounter, coming across as more energized and polished as he aimed to clear the bar in the minds of voters that he could be president.

How did the the debate play across the country? Here’s a collection of headlines from the major dailies and some battleground state newspapers:

Team NewsHour’s in-depth coverage Wednesday night included Gwen Ifill and Judy Woodruff co-anchoring the PBS election special, post-game analysis from columnists Mark Shields and David Brooks and a look at how the campaigns viewed the evening by NPR’s Ari Shapiro and Scott Horsley on site in Denver. Christina also joined the group for a look at reaction to the debate on social media.

Watch the special here or below:

Twitter announced early Thursday morning that the debate was the most-tweeted political event in history with 10.3 million tweets. The peak of activity was as Romney sparred with moderator Jim Lehrer with 158,690 tweets being sent in a single minute. Here’s a chart of the Top 10 moments.

We kept the conversation going online in an “After Hours” livestream. Christina spoke with two truly undecided voters, young women from Colorado and Virginia, about what they wanted to see during the debate and how they might make up their minds in the coming weeks.

Watch that Google Plus discussion here or below.

Ray Suarez watched the debate with a group of voters in Florida. Watch Thursday’s NewsHour to see whether the meeting changed their minds.

Want to watch the entire debate online? We’ve got you covered.

A big moment in the debate was when President Obama did not challenge some of Romney’s assertions, with Democrats particularly exercised Mr. Obama did not hit back on the Republican’s claim he is cutting $716 billion from Medicare.

Romney also inflated the number of unemployed by more than 10 million.

The Associated Press’ fact check found fault with both men.

Obama’s claim that Romney wants to cut taxes by $5 trillion doesn’t add up. Presumably, Obama was talking about the effect of Romney’s tax plan over 10 years, which is common in Washington. But Obama’s math doesn’t take into account Romney’s entire plan.

Politifact’s piece found a few big distortions, and Annenberg’s FactCheck.org examined the false claims “flying thick and fast” on stage. (Politifact determined that Romney’s comments about a health care board making decisions about treatment to be most egregious.)

The New York Times’ fact checks throughout the evening are compiled here, and here is the Washington Post’s Glenn Kessler.

ABC spliced in video to go with its fact check.

Thursday’s tidbit from NewsHour partner Face the Facts USA focuses on U.S. aid to foreign countries. The nonpartisan group found that the United States “is the world’s leading donor of government aid to other countries, distributing twice as much as any other nation. But its $38 billion contribution in 2010 equaled less than 1 percent of federal spending.”

The presidential campaign may roll on until Nov. 6, but many Iowans have found themselves ready for Election Day. The continuous political culture in the first-to-caucus state has created a climate in which little indecision on the next president remains.

Correspondent Hari Sreenivasan and our politics team traveled to the Hawkeye State last week and found a record count of thousands of Iowans voting early and even more having already made up their minds. Voters who still felt up-in-the-air about the candidates were hard to find.

In fact, a Des Moines Register poll released last week measured only 2 percent of voters still to decide who they will support.

Hari spoke with Gerri Franz of Council Bluffs at an Oktoberfest celebration in Amana, Iowa, and she asserted that she still was making up her mind.

“It’s easier to find a leprechaun or a unicorn than it is to find you,” Hari told her. “What are you waiting for?”

“I’m just weighing everything,” she said. The presidential debates would help her decide, she said. She said she looks forward to going to the polls on Election Day, though as many as 40 percent of Iowans may cast ballots during early voting, which started Sept. 27.

The NewsHour in Iowa tumblr has behind-the-scenes photos from Hari and the team’s trip.

Watch the story here or below:

For more on the 19-year-old political turncoat Charlie Comfort and his transformation from Obama booster to Newt Gingrich caucuser, check this out.

And if you’re interested in Newton, Iowa, the blue-collar town where NewsHour found Chaz Allen and vested interest in wind energy policy and job creation, read this Maytag closure post-mortem via the New York Times in 2007.

For more from Iowa voters, we’ve collected these videos on their political beliefs as part of our Listen to Me project.

I’m just getting warmed up! Time to get ready for the postseason! You ain’t seen nothing yet! The Rough Rider has arrived!