Romney Looks to Strengthen Lead With Win in Illinois 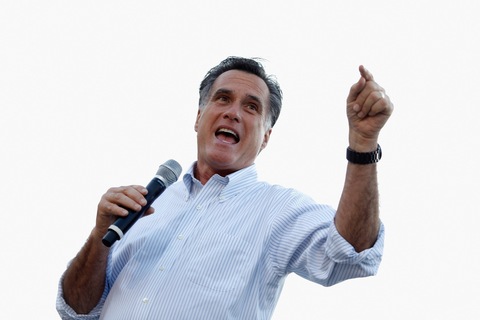 Voting is underway in the Land of Lincoln, where Mitt Romney is looking for a decisive victory in President Obama’s home state to cement his status as the Republican front-runner, while Rick Santorum hopes to pull off an upset that would upend the topsy-turvy GOP race one more time.

The polls in Illinois close at 8 p.m. ET. You can track the results at our Vote 2012 Map Center.

A total of 54 delegates are at stake Tuesday, but according to the Associated Press, Santorum cannot win at least 10 of them because his campaign failed to submit the necessary paperwork.

Romney has been campaigning in the state since Saturday and finished his day Monday with a rally at Bradley University in Peoria, where he took aim at comments Santorum had made a few hours earlier.

Santorum made the remarks about the unemployment rate while trying to explain that his campaign is about more than just a single issue.

“We need a candidate who is going to be a fighter for freedom, who is going to get up and make that the central theme in this race, because it is the central theme in this race. I don’t care what the unemployment rate’s going to be. It doesn’t matter to me,” Santorum told a crowd in Moline. “My campaign doesn’t hinge on unemployment rates and growth rates. There is something more foundational that’s going on here.”

Still, the phrasing was not ideal, and Santorum later clarified his comments, telling Fox News, “If you want to solve the unemployment problem you have got to solve the regulatory, tax and government oppression problem.”

“One is a cause of the other,” Santorum added. “It’s not that unemployment isn’t important. It’s just you have to get to the foundational root cause of what’s causing the unemployment.”

Romney is leading polls of the state, and he and the super PAC supporting him have outspent Santorum 7-to-1 statewide, Politico’s Alex Burns reports. Burns notes the spending disparity is 21-to-1 in the Chicago area, where Romney is expected to be the strongest.

The Republican National Committee is putting a new 30-second spot on the air in six battleground states starting Tuesday. The ad, which attacks President Obama’s health care law, will be seen in Florida, Nevada, New Mexico, Ohio, Pennsylvania and Virginia.

Watch it here or below.

Judy Woodruff talked with former Govs. Christie Todd Whitman of New Jersey and David Boren of Oklahoma about the effort by Americans Elect to get ballot access in all 50 states to promote a bipartisan presidential ticket. Boren said Whitman would be a great choice for the GOP side of the equation.

“This would be the first bipartisan ticket in modern American history,” Boren said, “a Democrat and a Republican running together, putting together a Cabinet that would be half Democrats, half Republicans, like Churchill did during World War II in Britain. It worked. It brought that country through those perilous times. People are fed up with the fighting between the two parties. We’re Americans first. There’s something more important — even though I’m a Democrat, there’s something more important to me than the Democratic Party or the Republican Party called the United States of America.”

Watch the discussion here or below.

The governors also penned a Politico op-ed laying out their solution for less bickering in Washington.

Judy (@judywoodruff) will take the conversation online Tuesday, answering your questions about the Americans Elect online primary. She’ll be joined by the group’s CTO for a Google+ hangout from 3-3:45 p.m. Details on how to participate are here.

Former House Speaker Newt Gingrich is back on the trail Tuesday after a multi-day respite that included a stroll past the cherry blossoms in Washington.

As we’ve noted in the Morning Line, Gingrich allies say his strategy is to lobby the delegates at the Republican National Convention to back him during a second round of balloting. But it’s hard to see how the candidate’s recent activities help him toward that goal.

Politico’s Jonathan Martin and Ginger Gibson reported Tuesday on the “grim state of affairs” in the Gingrich campaign.

From their story, which notes that Gingrich won’t be stepping aside before Tampa:

A lifelong animal lover, the former Speaker has been scheduling more time at zoos. He toured the renowned San Diego Zoo in mid-February, going behind the scenes to look at panda bears, and was slated to hit the Birmingham Zoo on primary day last week in Alabama until it got rained out.

Gingrich was not to be denied Friday in New Orleans, though, where he checked out the flamingos, petted an elephant and got roared at by animatronic dinosaurs at Audubon Park.

It’s not just his interest his animals that he’s indulging. The former history professor is also making time on the trail to take in America’s landmarks.

After months of talking about the Wright brothers in his stump speech, Gingrich stopped in Dayton, Ohio, last month to tour Orville Wright’s home.

“That was fun,” Gingrich remarked as he left the house with his wife, Callista.

“It was. It was fascinating,” she said. “I’m glad we did that — add it to our list of historic places.”

The unusual schedule, mixing in just plain fun to lessen the monotony of modern campaigning, reflects a candidate who is fully in charge of his own operation.

RT @TheFix: A thoughtful piece from @daveweigel on whether voters are stupid and whether reporters should say it. ow.ly/9KQOy

Americans Elect has submitted 37k signatures (22k needed) to get on OR ballot. Would be 19ththey’ve where theyve gained access #HotlineSort