Updated 10:04 p.m. ET | Former Massachusetts Gov. Mitt Romney scored a decisive victory Tuesday in the Illinois primary, helping cement his status as the Republican Party’s frontrunner and adding to his lead in the race to the 1,144 delegates needed to clinch the GOP nomination. 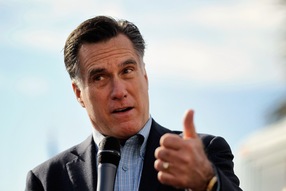 You can track the latest results in our Vote 2012 Map Center.

Addressing supporters in Schaumburg, Ill., Romney said, “Elections are about choices and today hundreds of thousands of people in Illinois have joined millions of people across the country to join our cause.”

Santorum appeared minutes later at a rally in Gettysburg, Pa., with a banner behind him that read “Freedom,” which the former senator said was the defining issue of the election.

“I’ve said throughout the course of this campaign that while other issues are certainly important — the economy, joblessness, national security concerns, the family, the issue of life — all of these issues are important,” Santorum began. “But the foundational issue in this race, the one that is in fact the cause of the other maladies that we are feeling, whether it’s in the economy or whether it’s in the budget crisis that we are dealing with, all boils down to one word, and that’s what’s at stake in this election and it’s right behind me on that banner and that’s the word freedom.”

Santorum also noted that Romney used the same word in his remarks Tuesday. “I was pleased to hear before I came out that Governor Romney is now adopting that theme at his speech tonight. I am glad we are moving the debate here in the Republican Party.”

Exit polls in the Land of Lincoln mirrored those from previous contests, with Romney faring well among less-conservative voters, suburban residents and those who cite ability to beat President Obama as the most important quality in a candidate. Santorum, meanwhile, received stronger support from the most-conservative members of the party as well as those who are evangelical or born-again Christian.

Thirty-five percent of voters Illinois GOP voters said that the ability to defeat Obama was the most important candidate quality, and among them, 71 percent cast their ballots for Romney. Less than a fifth chose Santorum.

Santorum outperformed Romney among voters who described themselves as “very conservative” by a 14-point margin, 48 to 34 percent. Romney, however, fared better with voters who said they were either “somewhat conservative” (54 to 29 percent) or “moderate or liberal” (46 to 27 percent).

As in other states, Santorum also did better than Romney among white, evangelical Christians, although his advantage was not as significant. Santorum took 47 percent of that vote in Illinois compared to 39 percent for Romney.

And unlike in Alabama and Mississippi last week, where more than three-quarters of voters said they were evangelical or born again, just 42 percent of Illinois Republicans described their religious views that way.

Romney won those who said they were not evangelical or born again by a 51 percent to 27 percent margin over Santorum.

The former Massachusetts governor also cleaned up among urban and suburban voters, besting Santorum by 15 and 11 percent, respectively. The former Pennsylvania senator did 20 points better than Romney with rural voters.

Romney’s Illinois victory is his second in three days, after he also notched an overwhelming win in the Puerto Rico primary on Sunday, taking all 20 of the island territory’s delegates.

There were 54 delegates up for grabs in Illinois on Tuesday, and Romney’s win, combined with the fact that Santorum forfeited at least 10 delegates because his campaign failed to submit the necessary paperwork, means the former Massachusetts governor’s delegate lead will grow, and the work for his rivals will get even tougher moving forward.