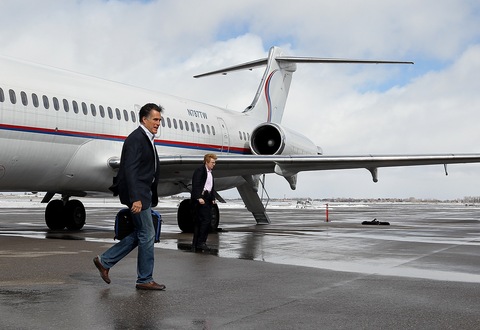 Mitt Romney walks off of his campaign plane at Idaho Falls Regional Airport on March 1. Romney is campaigning in North Dakota, Idaho and Washington ahead of Super Tuesday. Photo by Getty Images.

With just a few days until Super Tuesday and on the eve of a caucus in Washington state, the presidential campaign returns to the question of who is the bigger insider.

ABC News on Friday morning went live with a not-before-seen video that it called “long-forgotten tape from the 2002 Massachusetts governor’s race” that depicts Mitt Romney boasting about getting federal funds.

The ABC story that accompanied the footage led with this quote from Romney as he addressed the New Bedford Industrial Foundation in October 2002: “I am a big believer in getting money where the money is. … The money is in Washington.” The video was “surreptitiously shot by Democratic opponents of Romney,” ABC reports.

Romney continued, “I want to go after every grant, every project, every department in Washington to assure that we are taking advantage of economic development opportunities,” a message that is quite different from what voters hear from the candidate on the trail today while he lauds himself as the only candidate who hasn’t lived in Washington. It’s his rivals Newt Gingrich and Rick Santorum, Romney says, who are the real D.C. insiders.

You can bet those Republicans will mention this video as they talk with voters about why they think they deserve the nomination.

The Friday morning news comes after Santorum’s team cried foul over a last-minute 4-2 decision by Michigan Republican Party officials to award Romney both of the state’s at-large delegates, a change in rules after Romney eeked out a narrow victory there Tuesday.

From the Free Press’ story explaining what happened:

Saul Anuzis, a member of the credentials committee, said the party’s rules were passed in early February to award the two at-large delegates to the statewide winner, but that a memo sent, in error, to the candidates’ campaigns said the delegates would be distributed proportionately. “While we regret the error in the memo, it does not change what was voted on by the committee,” Anuzis said. “This is much to do about nothing.” Santorum spokesman Hogan Gidley called the delegate situation “The kind of backroom dealing, political thuggery that just cannot happen in America.” “We never thought the Romney campaign would rig the outcome of the election by changing the rules after the vote,” he added. “It’s very clear the rules were not followed by the establishment so they could prop up their hand-picked candidate.”

With 10 states ready to award more than 400 delegates on Tuesday, a change in one may not seem like the biggest deal. But as the hopefuls are collecting as many as they can to reach 1,144 delegates, every one counts.

That’s one reason why Georgia is as important on the election calendar as Ohio. Should Gingrich, the former House speaker who represented the state in Congress, win big there next week, he’ll take the lion’s share of Georgia’s 76 delegates.

But Professor Charles Bullock of the University of Georgia isn’t sure Gingrich can crack 40 percent. Ray Suarez talked Thursday night with Bullock and John Geer, co-director of the Vanderbilt Poll at Tennessee’s Vanderbilt University, about the first real test of the candidates in the South.

“I think he will be the leading candidate, but he may see Santorum creeping up on him,” Bullock said of Gingrich. “And if Gingrich can’t do well in Georgia, then I don’t think there’s any encore for him. I think maybe this will be the last of his nine lives.”

Watch the segment here or below.

In other Gingrich news, a Texas tea party member on Friday morning announced a new pro-Gingrich super PAC. Brandon Todd issued a press release directing supporters to www.winningfreedom.org and www.newtgingrich360.com to make a difference in “the most important election of our lifetime.”

After their Michigan slugfest, it appears Santorum and Romney are locked in a rematch in Ohio. Santorum leads Romney 35 to 31 percent in a poll released Friday by Quinnipiac University.

Santorum holds advantages over Romney among self-described conservatives (40 to 27 percent) and Tea Party supporters (42 to 25 percent). Romney, meanwhile, leads among moderates, 46 to 26 percent.

Given the narrow margin between the two leading contenders, and the fact that a third of respondents said they might change their mind by next Tuesday, it appears the battle in the Buckeye State is still up for grabs.

WHAT OHIO VOTERS ARE SEEING

While Northeast Ohio is a heavily Democratic part of the state, the region is still home to plenty of Republicans, and the GOP candidates and the super PACs supporting them are clearly going after those voters on the air.

The pro-Romney super PAC Restore Our Future had three different ads running during the 6 a.m. hour on Cleveland’s local NBC affiliate. The spots included a positive one about Romney helping a former business partner find his missing daughter (a recycled Romney campaign ad from 2007), plus two attacking Santorum for being a Washington insider. “Twenty years in Washington changed Rick Santorum,” a narrator says in one of the ads. The Romney campaign is taking a similar approach in its ad targeting Santorum.

Romney is under fire from both sides. The pro-Gingrich super PAC Winning Our Future has an ad up that uses clips from people saying they don’t “trust” Romney and have trouble connecting with him. “Romney’s not the type to pump his own gas,” one woman says.

Big Labor is also going after Romney. The American Federation of State, County and Municipal Employees is running an ad jabbing Romney for his opposition to the auto bailout.

As far as the news coverage itself, Romney and Santorum were briefly mentioned about 40 minutes into the hour, with the anchors noting that each had campaign events in Northeast Ohio on Friday.

Terence spent Thursday morning visiting the Columbus campaign headquarters of Romney, Santorum and Paul to get a sense of how much their ground operations had picked up in Ohio.

The morning started with a stop at Romney headquarters in a nondescript shopping plaza a few miles west of downtown Columbus, where a handful of volunteers were busily working to get the office set up after last week’s grand opening. Reynoldsburg resident Les Davies, one of Romney’s Ohio delegates and cousin of the candidate’s wife, Ann, stopped in to check on the status of new yard signs and bumper stickers.

Santorum’s Columbus operation is based out of a sprawling business park in the northeast part of the city. About a half dozen volunteers were set up at folding tables making calls.

At Paul’s campaign headquarters, Mike Folker, a local radio personality, was the only one on the scene. He said the downtown office had been open for about two months and the effort was focused on phone banking and “sign bombing” high traffic areas around the city.

Columbus construction worker Rich Walker dropped by looking for a yard sign and a bumper sticker. He said he was drawn to Paul because “he has the most ambitious plan to cut spending” of all the GOP candidates.

ON BREITBART AND CANDIDATE PHOTOS

Footage from a few months ago: Breitbart on what he hoped his legacy would be. youtu.be/NAHJsJqgcts

It’s true Joe Arpaio was Romney’s AZ guy 4 years ago, but he told me last week “He seems to have forgot my number.” Today we see why.