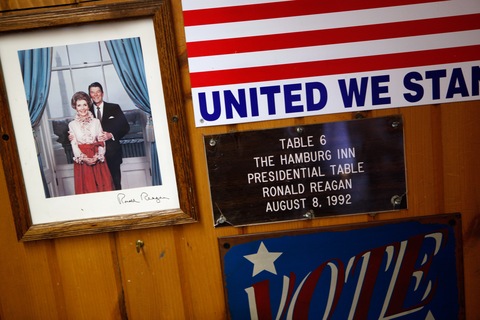 The ‘Presidential Table’ at the Hamburg Inn No. 2 is a well-known stop for hopefuls campaigning in Iowa. Photo by Chip Somodevilla/Getty Images.

The first big Hawkeye State cattle call in the battle for the 2012 GOP presidential nomination is set to take place beginning at 6:30 p.m. ET at Point of Grace Church in Waukee, Iowa.

The Iowa Faith & Freedom Coalition, a Christian conservative group active in the state’s Republican politics, is sponsoring Monday night’s event and invited all of the potential 2012 hopefuls.

Each candidate will be introduced by Pete Ricketts, the former Ameritrade executive who was defeated by Sen. Ben Nelson in the 2006 Nebraska Senate race.

The candidates, who will will speak in alphabetical order, have 10 minutes to address the 500-600 Republican activists expected to attend.

“I think most caucus goers want to be convinced in their heart of hearts that this candidate that they are going to support is actually going to try and act on some of the things they said they stood for,” said Iowa Faith & Freedom Coalition President Steve Scheffler in an interview with the Morning Line.

“I think they want to be convinced that they have a candidate that’s got a backbone that’s made of steel,” Scheffler said. “Kind of like what we are observing now in Wisconsin where Scott Walker and the Republican legislature is basically taking the hits but doing some bold things that I think a lot of us admire a lot.”

As for the candidates not attending Monday evening’s event, Scheffler said it wasn’t for lack of interest on the part of at least a couple of them.

“Congresswoman [Michele] Bachmann really wanted to come, but she had a longstanding prior engagement and couldn’t be here,” Scheffler said. “Governor [Haley] Barbour wanted to be here in the worst way, but he had some commitments he made in Florida that he just couldn’t get out of. We just got a simple letter from [Mike] Huckabee saying he couldn’t be here,” he added.

“I guess [Sarah] Palin was maybe about the only one that we didn’t hear from,” Scheffler said.

Scheffler noted that Mitt Romney’s team informed him that he, too, wouldn’t be able to make it.

“Of course Romney has stated publicly, I think, that if he runs he fully expects to play in the early states, but it may be later than last time,” Scheffler said. “So, we don’t feel it was a snub, it’s just that the timing is probably not right for him.”

Scheffler also plans to host house parties around the state for individual candidates to each have a shot of addressing a living room full of activists in Iowa’s tradition of wooing votes in small settings. He expects those house parties to take place between May and August before the coalition’s big annual fundraiser on Oct. 22.

“I suppose they hope and expect to hear from them on what their vision for the country is if they get elected and how bold are they going to be in terms of trying to push back the socialist Obama agenda,” Scheffler said, describing what he believes the attendees expect from the candidates tonight.

“I think activists this time are going to be a lot more discriminating before they make a choice,” he said.

The White House may be an admirer of the health care reform enacted in Massachusetts by former Gov. Mitt Romney, but the Republican is no fan of the national overhaul signed into law last year by President Obama.

Romney made that point perfectly clear Saturday at a Republican Party dinner in New Hampshire.

The Associated Press’ Liz Sidoti has this read-out of Romney’s speech:

“Republican presidential hopeful Mitt Romney on Saturday derided President Barack Obama’s health care law — modeled in some ways after one the ex-governor signed in Massachusetts — as a misguided and egregious effort to seize more power for Washington.

‘Obamacare is bad law, bad policy, and it is bad for America’s families,’ Romney declared. ‘And that’s the reason why President Obama will be a one-term president.’ He vowed to repeal it if he were ever in a position to do so, and drew hearty cheers from his Republican Party audience.”

Sara Young-Knox of the New Hampshire Union Leader notes the fine line Romney had to walk given the similarities between his plan and the national overhaul:

“Defending the Massachusetts health care program passed during his governorship, Romney said, ‘Our experiment wasn’t perfect; some things worked, some didn’t, and some things I’d change. One thing I would never do is usurp the constitutional power of states with a one-size-fits-all federal takeover.'”

In an address to the National Governors Association last month, President Obama commended Romney’s Bay State plan. “I agree with Mitt Romney, who recently said he’s proud of what he accomplished on health care in Massachusetts and supports giving states the power to determine their own health care solutions,” the president told the governors. “He’s right. Alabama is not going to have exactly the same needs as Massachusetts or California or North Dakota. We believe in that flexibility.”

While embraced by the Obama administration, Massachusetts’ health care plan has been the target of criticism from Republicans, including possible 2012 contenders Mike Huckabee and Haley Barbour.

POLITICO’s James Hohmann checks in with New Hampshire voters and finds that Romney’s health care plan, while considered a liability, would not doom his candidacy in the Granite State.

Two other Romney must-reads are Jeff Zeleny’s report in the New York Times about how the former business executive is using that experience to make another contrast with President Obama, and Glen Johnson’s analysis in the Boston Globe that looks at one of the lingering question marks surrounding Romney: his authenticity.

Former Rep. Heather Wilson, R-N.M., is poised to announce her candidacy for the Senate at 4:30 p.m. ET in Albuquerque.

However, it’s her decade-plus tenure in Washington that Democrats hope will be an Achilles’ heel for her in the race to replace the retiring Democratic incumbent, Sen. Jeff Bingaman.

“Heather Wilson came to Washington 13 years ago. She mixed and mingled and got to know people. She rubbed elbows and raised money. She really liked Washington,” intones the video’s female narrator while pictures of Wilson with George W. Bush, John McCain and Dennis Hastert splash across the screen.

“For years, Heather Wilson was part of the problem in Washington and now she wants to be sent back. Last time around, New Mexico primary voters rejected her and turns out they had good reason to,” said DSCC communications director Eric Schultz.

Clearly, Democrats are wasting no time trying to build a negative frame around Wilson because they perceive her candidacy as a serious threat.

The National Republican Senatorial Committee just tried to soften up DNC Chairman Tim Kaine with a web video of its own last week as he gets apparently closer to jumping into the Senate race in Virginia to replace the retiring Democratic incumbent Sen. Jim Webb.