DEARBORN, Mich. — The Democratic presidential primary is down to two major candidates, and it shows.

It reflects the new contours of a race that once featured 20-plus Democrats. An increasingly bitter matchup could endure for months as Biden and Sanders compete for the right to face President Donald Trump in November.

“We have a two-person race,” Sanders said Saturday in Dearborn, a Detroit suburb with one of the nation’s largest Arab American populations. “And all over this country, people are asking themselves which candidate can best defeat Trump. I have zero doubt in my mind that, together, we are the campaign that can beat Trump.” 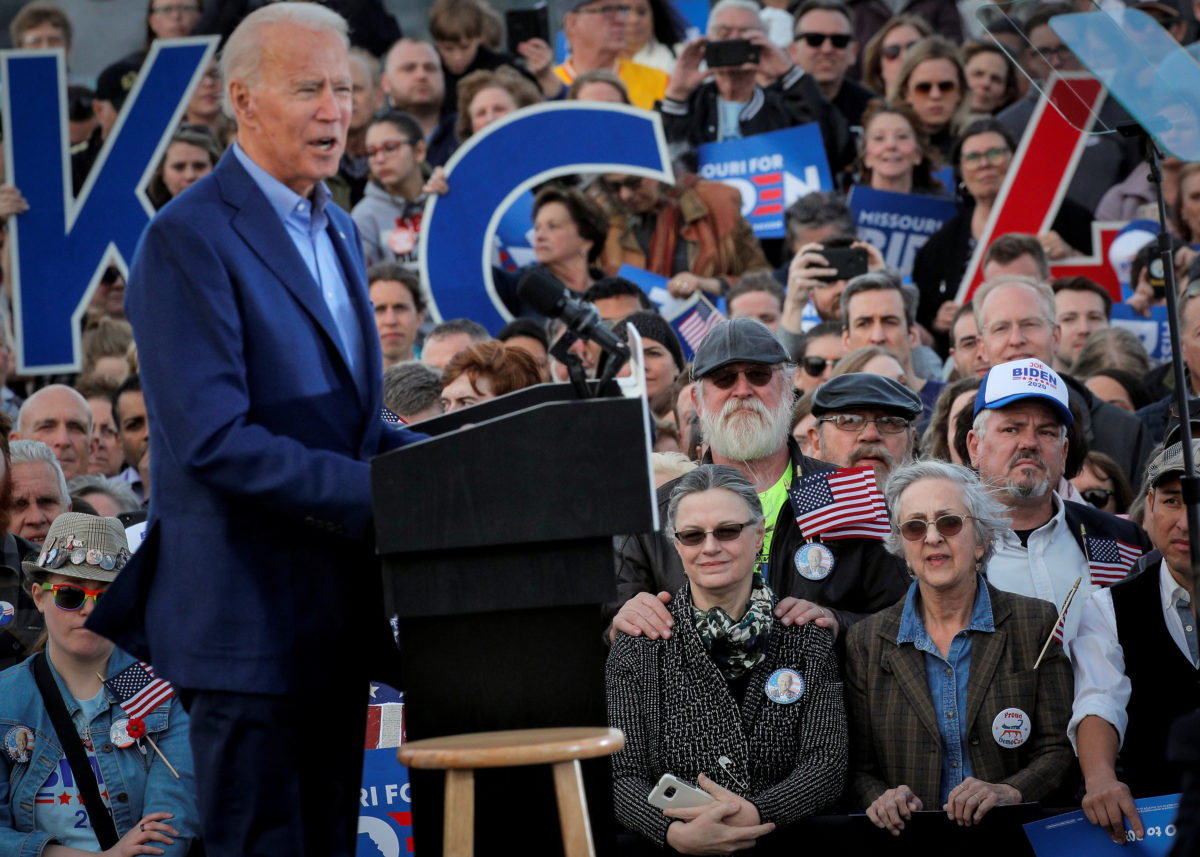 Campaigning in St. Louis, Biden took a number of veiled swipes at Sanders, even as he called on Democrats to rise above Trump’s division.

He told the crowd that if they wanted to nominate a “lifelong” and “proud” Democrat, they should pick him. Sanders has run for office as in Independent and identifies himself as a democratic socialist.

“If you want a nominee who’ll bring the party together, who will run on a positive progressive vision for the future, not turn this primary into a campaign of negative attacks — because that will only reelect Donald Trump if we go that route — if you want that, join us,‘’ Biden said.

The former vice president also knocked Sanders’ weeks of suggestions that he is the candidate who can prompt record voter turnout in November and defeat Trump, saying that actually “we’re the campaign that’s going to do that.”

Sanders argues that no Democrat will win the presidency “with the same-old, same-old politics of yesteryear.”

And in a sign of how biting the contest may become, Sanders supporters — including his campaign manager — raised questions about Biden’s stamina after he gave a seven minute speech in St. Louis. At his second stop, in Kansas City, he again gave a truncated version of his stump speech, speaking for a little over 15 minutes.

Sanders campaign manager Faiz Shakir issued a tweet noting Biden’s short speaking time and highlighting the fact that Sanders had three campaign events on his schedule, “each speaking engagement extending for close to an hour.”

But the focus on Biden’s age is somewhat ironic given that the 78-year-old Sanders is actually a year older than Biden. Sanders, who has served in Congress since 1991, says he’s bucked the establishment of both parties with decades with unpopular stands that now give him the credibility to lead a political revolution “from the bottom up.”

Sanders is pledging to increase Democratic turnout by drawing younger voters, minorities and working class people to the polls even though they tend to vote in lower concentrations than many other Americans. Strong support among Hispanics lifted Sanders to victories in Nevada and California, but Biden trounced him in South Carolina and throughout much of the Deep South that voted during last week’s Super Tuesday. Biden especially ran up the score with African Americans.

Some activists are disappointed that a once diverse field of women and minorities has dwindled to two white men in their late 70s. But in Dearborn, Sanders, who is Jewish, said he was inspired by so many Arab Americans backing him. “I see people coming together from so many different backgrounds. It is beautiful,” he said. He also joked about his age, saying, “Sometimes people say, ‘Bernie, you’re 33 years of age. How do you keep going?’”

Top advisers expect Sanders to finish strong in Washington. Still, he canceled a trip to Mississippi to focus on Michigan, Tuesday’s largest prize. He made a stop in Chicago’s Grant Park on Saturday afternoon, and declared that he has a different vision than Biden, “And the American people are going to hear about it.” Sanders will spend the rest of the weekend in Michigan, while Biden is in Missouri and Mississippi.

Sanders said repeatedly that he and Biden are friends and that, if he’s not the nominee, he will support Biden against Trump. But, he added, “In the remaining months, I intend to make it clear what my views are and what Joe Biden’s are.”

The campaign is being conducted as the country is contending with the coronavirus outbreak. The AFL-CIO said Saturday that it was canceling a scheduled presidential forum set for Thursday in Orlando in the week before the Florida primary.

Sanders has used many of his Michigan events to hammer Biden’s past support for the North American Free Trade Agreement, arguing that it moved high-paying U.S. jobs to Mexico and China while devastating manufacturing in a state dominated by the auto industry. He’s focused on Biden’s years in the Senate, when Biden backed not only trade agreements and the U.S.-led war in Iraq, but also a ban on using federal funds to pay for abortions. Biden announced this summer that he was reversing his position on that, but Sanders said that wasn’t enough.

“I think we need a candidate that can be trusted on this issue. I am proud to tell you that I am 100% pro choice,” Sanders says.

The pair are also circling each other on the airwaves.

Biden saw a surge of donor support after South Carolina and Super Tuesday, and his campaign announced that it was spending $12 million on a six-state ad buy in places voting Tuesday and the following week. It was his largest single advertising effort of the 2020 campaign.

He is using two television and digital ads, one promoting his relationship with President Barack Obama, the other a new effort to counter a Sanders attack on Biden’s past record on Social Security. It’s a criticism Sanders has used for months. And though he hasn’t mentioned it as frequently while campaigning in Michigan, he has released his own ad airing in states voting Tuesday and the following week dinging Biden on Social Security.

It features a past clip of the former vice president saying, “When I argued if we should freeze federal spending, I meant Social Security.” Biden’s counter spot has a narrator saying, “Biden will increase Social Security benefits and protect it for generations to come.”