PHILADELPHIA — Bernie Sanders delegates walked off the convention hall floor Tuesday night after Hillary Clinton formally received the Democratic Party’s presidential nomination, an embarrassing turn of events for Clinton as she seeks to unify the party.

Dozens of Sanders supporters walked out after the roll call for Clinton was over, and made their way to an adjacent media pavilion where they staged a sit-in to protest Clinton’s nomination.

“We’ve had enough of them shoving Hillary Clinton down our throats,” said Kristy Douglas, a delegate who participated in the walkout.

Michelle McFadden-DiNicola, another Sanders delegate who walked out of the Wells Fargo Arena, said “it was clear that we weren’t needed anymore.”

“I’m here to give voice to people who were silenced in the primary,” she added.

“I’m here to give voice to people who were silenced in the primary.”

The walkout came as Sanders supporters fanned out across Philadelphia to hold rallies and marches for the Vermont senator, who finished second in the primaries.

It appeared that the protests, which began over the weekend, would continue through the week, despite Sanders’ plea on Monday night for progressive voters to unite behind Clinton.

In his convention speech Sanders insisted that his presidential campaign was part of a political movement that was larger than any one person, including himself. 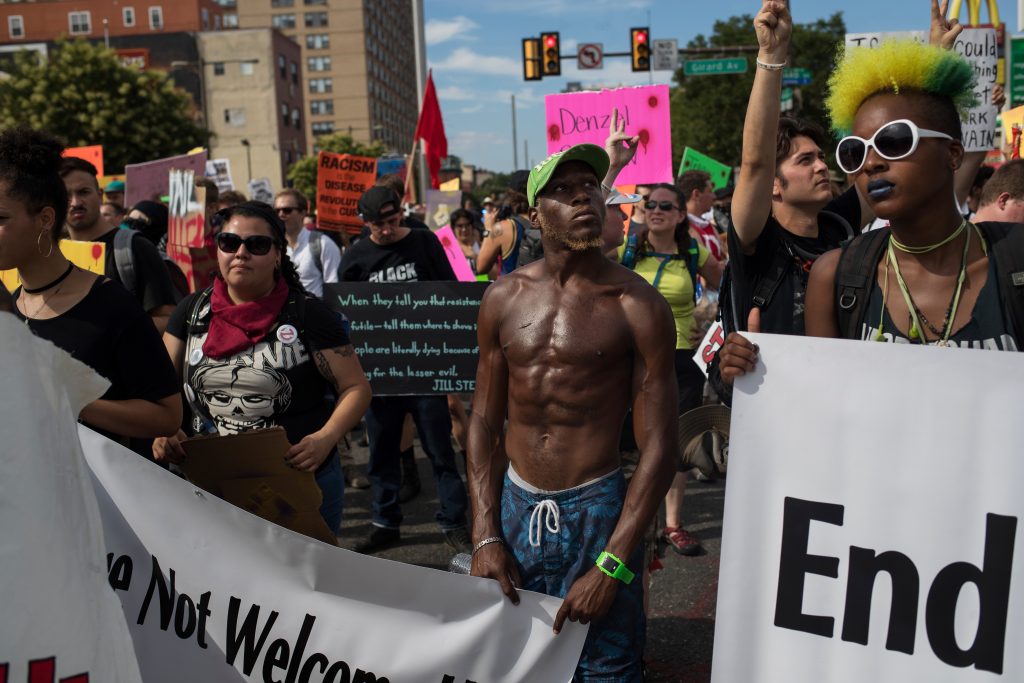 Protesters hold signs while demonstrating at a Black Lives Matter rally during the Democratic National Convention (DNC) in Philadelphia on July 26. Democrats began their presidential nominating convention Monday with a struggle to fully unite the party, following a dramatic day of internal squabbling and protests. Photo by Victor J. Blue/Bloomberg via Getty Images

Many of his supporters seem to agree: at a rally on Tuesday near downtown Philadelphia, several said they still respect Sanders, but would not heed his call for party unity.

“The whole system is rigged. We’ve been saying that all along,” said Maria Estrada, a financial adviser from California and a leader of the group Compton for Bernie. “I get that Bernie said we have to stop Trump,” she added. “But under no circumstances will I back Hillary Clinton.” 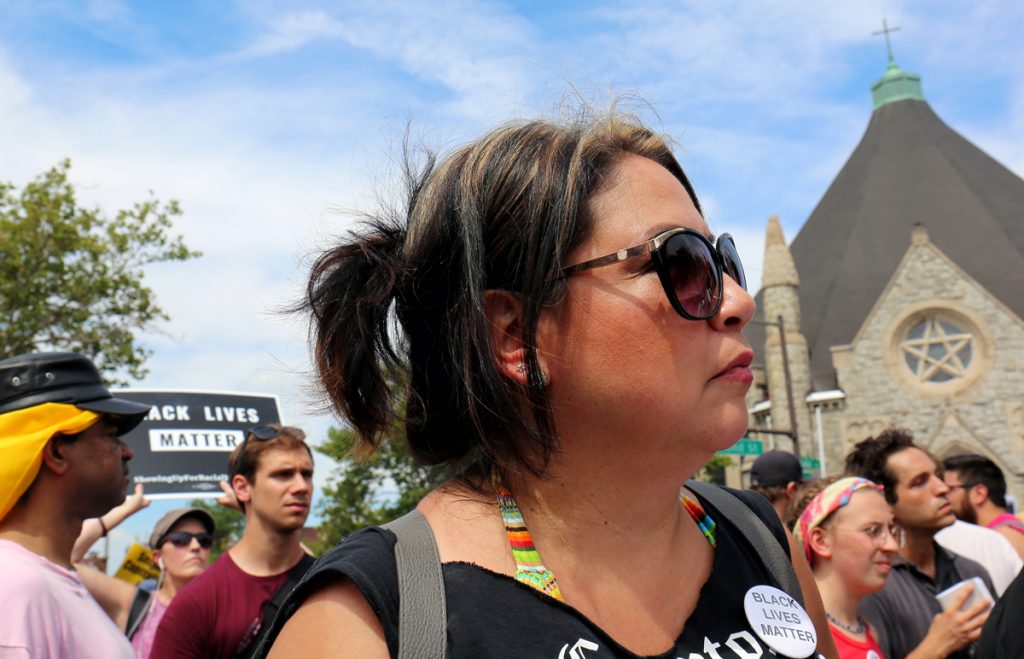 Maria Estrada flew members of her group, Compton for Bernie, to Philadelphia to participate in protests at the DNC.

A separate poll put out on Monday found that 75 percent of Sanders supporters planned to vote for Clinton. Still, many Sanders backers in Philadelphia said they would withhold their support.

Trish Vargas, who traveled to Philadelphia from Morgantown, West Virginia to participate in protest marches at the convention, said she planned to vote for Jill Stein, the Green Party’s presidential candidate.

Vargas said Clinton’s foreign policy was too hawkish for her. She rejected the argument put forth by Clinton supporters that voting for a third party candidate would help Trump in November.

“If Donald Trump wins it’s nobody’s fault but Debbie Wasserman Schultz for rigging the primaries,” Vargas said, referring to the chairwoman of the Democratic National Committee, who stepped down earlier this week.

Schultz resigned in response to the release of leaked emails that showed DNC staffers, who are supposed to remain neutral in the primaries, plotting ways to undermine Sanders’ campaign.

The protest on Tuesday also reflected the broad range of liberal interests that oppose Clinton’s candidacy.

The march, which was loosely organized by Black Lives Matter, featured an eclectic mix of Sanders supporters, labor organizers, and activists like Kashara White, a member of the far-left Party for Socialism and Liberation. 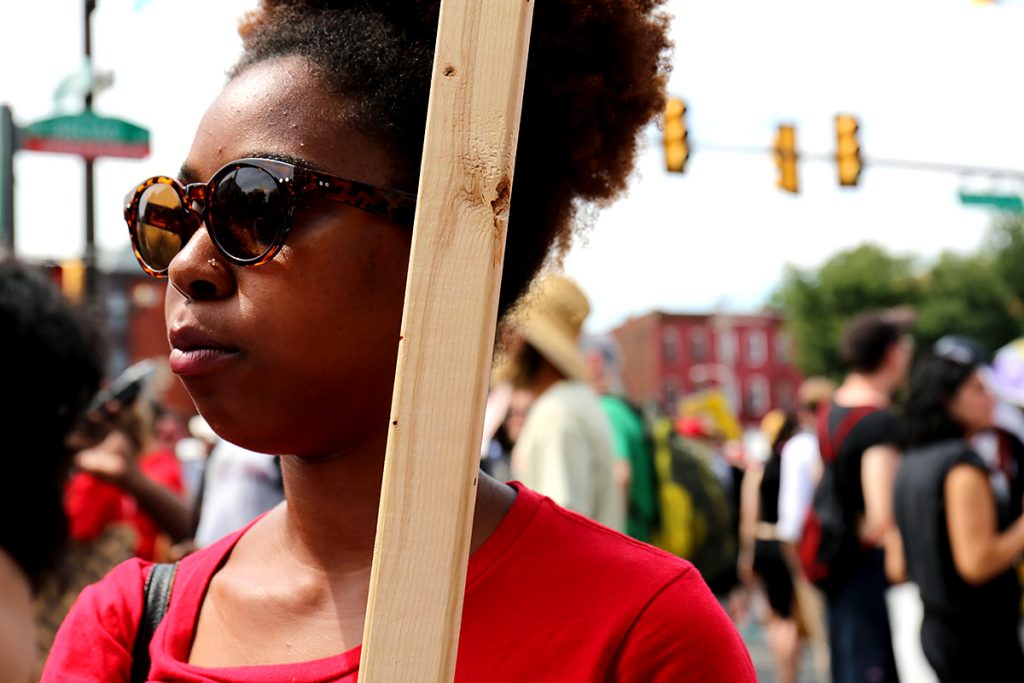 Kashara White, a member of the Socialism and Liberation Party, attends a Black Lives Matter protest in Philadelphia on Tuesday. Photo by Vanessa Dennis

“The left has been fractured for some time,” said White, an undergraduate student at Temple University. But now, “there’s an insurgency happening in the Democratic Party,” she added. “This election leaves us with many new possibilities.”

Jaclyn Diaz contributed to this reporting.