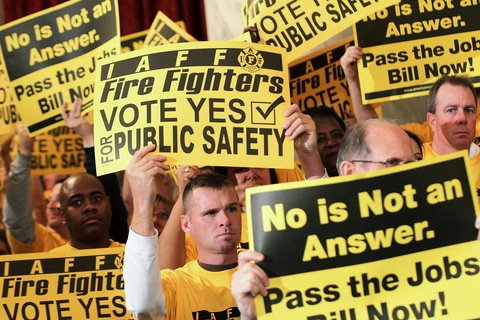 Fire fighters, police officers and teachers rallied at the Capitol this week for passage of the Teachers and First Responders Back to Work Act. Photo by Alex Wong/Getty Images.

President Obama’s plan to break his $447 billion jobs bill into bite-sized pieces doesn’t seem to be enhancing the chances that legislation actually gets to his desk for his signature.

The Senate blocked the first stand-alone measure from the president’s jobs bill in a 50-50 vote late Thursday night.

The measure was aimed at providing states with $35 billion in federal aid to retain or hire teachers, police officers and firefighters.

Sen. Reid fell well short of the 60 votes he needed to cut off debate. (In fact, two Democratic senators who voted with their colleagues to end debate and move to a final vote said they would vote against the bill.)

The White House had been making a full-court press this week for the bill. President Obama touted it constantly on his three-day bus tour through North Carolina and Virginia. Vice President Joe Biden attended a raucous rally in support of the bill on Capitol Hill this week.

The president once again sought to place all of the blame on the GOP minority in the Senate.

“For the second time in two weeks, every single Republican in the United States Senate has chosen to obstruct a bill that would create jobs and get our economy going again. That’s unacceptable,” he said in a statement issued late Thursday.

“Our fight isn’t over. We will keep working with Congress to bring up the American Jobs Act piece by piece, and give Republicans another chance to put country before party and help us put the American people back to work,” the president added.

Senate Minority Leader Mitch McConnell, R-Ky., gave voice to the crux of the opposition to the state aid. Senate Democrats proposed paying for it with a surtax on millionaires. Republicans say that puts an unnecessary burden on job creators in this economic climate.

“Everybody in this body knows that the American people want us to do something about the jobs crisis,” Sen. McConnell said. “What Republicans have been saying is that raising taxes on business owners isn’t the way to do it.”

Sen. Reid has not yet said which piece of the president’s jobs bill will come up next for a vote, but don’t be too surprised if one item comes along the way (perhaps infrastructure spending) that actually garners bipartisan support and gets to the president’s desk.

Until then, buckle up for more posturing on both sides.

Marco Rubio’s meteoric rise appeared to be knocked slightly off course Thursday by a Washington Post report that found the first-term Florida senator may have embellished his family history.

Here are the top two graphs of the Post story, written by Manuel Roig-Franzia:

“During his rise to political prominence, Sen. Marco Rubio frequently repeated a compelling version of his family’s history that had special resonance in South Florida. He was the ‘son of exiles,’ he told audiences, Cuban Americans forced off their beloved island after ‘a thug,’ Fidel Castro, took power.

“But a review of documents — including naturalization papers and other official records — reveals that the Florida Republican’s account embellishes the facts. The documents show that Rubio’s parents came to the United States and were admitted for permanent residence more than 2 1/2 years before Castro’s forces overthrew the Cuban government and took power on New Year’s Day 1959.”

The biography on Rubio’s official Senate website says, “In 1971, Marco was born in Miami to Cuban-born parents who came to America following Fidel Castro’s takeover.”

Sen. Rubio responded forcefully to the Post story in a statement Thursday.

“To suggest my family’s story is embellished for political gain is outrageous. The dates I have given regarding my family’s history have always been based on my parents’ recollections of events that occurred over 55 years ago and which were relayed to me by them more than two decades after they happened….

“What’s important is that the essential facts of my parent’s story are completely accurate. They were exiled from the home country they tried to return to because they did not want to live under communism. That is an undisputed fact and to suggest otherwise is outrageous.”

To further its claim, the Post also highlights a speech Rubio gave in tribute to Cuban exiles in 2006, on the occasion of his elevation to speaker of the Florida House.

“Wearing a red flower in his lapel, his voice sometimes emotional, he praised those who fled, calling them ‘a great generation.’ But he also assured them: ‘Today your children and grandchildren are the secretary of commerce of the United States and multiple members of Congress, they are the CEO of Fortune 500 companies and successful entrepreneurs, they are Grammy-winning artists and they are renowned journalists, they are a United States senator and soon, even speaker of the Florida House.'”

The Miami Herald’s Marc Caputo looked at the Post story and Rubio’s 2006 Florida House speech and offered this takeaway:

Caputo ultimately comes to this conclusion:

“So to suggest Rubio serially embellished the ‘dramatic’ story of his parents fleeing Cuba could be a little too dramatic itself. And it might be an embellishment as well — absent more information clearly showing Rubio has repeatedly said his parents fled Castro’s Cuba.”

The full clip is on YouTube so you can judge for yourselves:

Just how damaging this episode is for Sen. Rubio, whose name is often mentioned as a potential vice presidential nominee next year, will depend on a number of factors. At the top of that list is whether any additional biographical inconsistencies come to light.

NO CAIN, NO GAIN

When you’re seeking the Republican Party’s nomination for president and you have to spend (at least) two days clearing up your position on abortion, it’s probably a sign that things aren’t going according to plan.

That’s the spot Herman Cain finds himself in Friday after giving an interview to CNN’s Piers Morgan Wednesday evening in which he seemed to endorse a pro-choice position while declaring that he was opposed to abortion. On Thursday, he turned around and clarified those comments.

“I can have an opinion on an issue without it being a directive on the nation,” Cain told Morgan. “The government shouldn’t be trying to tell people everything to do, especially when it comes to a social decision that they need to make.”

Cain was in full clean-up mode Thursday, releasing this statement:

“As to my political policy view on abortion, I am 100% pro-life. End of story.

“I will appoint judges who understand the original intent of the Constitution. Judges who are committed to the rule of law know that the Constitution contains no right to take the life of unborn children.

“I will oppose government funding of abortion. I will veto any legislation that contains funds for Planned Parenthood. I will do everything that a President can do, consistent with his constitutional role, to advance the culture of life.”

The question is whether that will be enough to calm concerns among social conservatives who may have been unsettled by the episode — and how much it begins to play into a broader narrative about Cain, who in recent days has shifted positions on an electrified border fence and swapping Guantanamo Bay detainees for U.S. hostages.

House Democrats may be in the minority, but the Democratic Congressional Campaign Committee has raised more money than its Republican counterparts this year.

And in the month of September, the DCCC nearly doubled the amount raised by the National Republican Congressional Committee. Democrats brought in $6.64 million compared to the House GOP’s $3.8 million.

There is one critical category where Republicans still have a clear edge in their effort to hang on to the House majority. The NRCC has $12.17 million in cash on hand compared to the DCCC’s $9.47 million in the bank.

National Journal’s Jessica Taylor breaks down the rest of the numbers for you.

All future events can be found on our Political Calendar.