Sessions pushes back against Trump, saying he ‘will not be improperly influenced’

WASHINGTON (AP) — President Donald Trump, newly incensed by campaign allegations, plunged back into his criticism of Attorney General Jeff Sessions, claiming in an interview that Sessions “never took control of the Justice Department” after Trump put him there. Sessions quickly hit back, declaring that he and his department “will not be improperly influenced by political considerations.”

“I demand the highest standards, and where they are not met, I take action,” Sessions said.

Trump was interviewed on “Fox & Friends” on Wednesday, the day after his former attorney Michael Cohen pleaded guilty to eight counts — and implicated the president — and former campaign manager Paul Manafort was convicted of financial crimes unrelated to the 2016 presidential campaign. The interview aired Thursday.

Trump has lashed out repeatedly in the past at Sessions, the Alabama Republican who was the first senator to endorse the celebrity businessman but then recused himself shortly after taking office from the special counsel investigation that led to the criminal cases and is still underway into possible collusion between Russia and the Trump campaign.

“You know the only reason I gave him the job? Because I felt loyalty, he was an original supporter,” Trump said, criticizing Sessions because he, according to the president, “never took control of the Justice Department.”

Sessions slapped back in a statement Thursday afternoon, saying he “took control of the Department of Justice the day I was sworn in, which is why we have had unprecedented success at effectuating the President’s agenda.”

He declared that while he’s attorney general “the actions” of the DOJ “will not be improperly influenced by political considerations. I demand the highest standards, and where they are not met, I take action.”

Trump in the interview also said in regard to his former lawyer Cohen that he thought it would be better if “flipping,” in which someone’s confidant helps prosecutors in return for a lighter sentence, “were illegal because people “just make up lies.”

“I know all about flipping,” Trump said. “For 30, 40 years I’ve been watching flippers. Everything’s wonderful and then they get 10 years in jail and they — they flip on whoever the next highest one is, or as high as you can go.”

That tool “almost ought to be outlawed. It’s not fair,” Trump said, adding it creates an incentive to “say bad things about somebody … just make up lies.”

Trump tried to play down his relationship with Cohen, his longtime “fixer,” who claims the president directed a hush-money scheme to buy the silence of two women who say they had affairs with Trump. The president contends Cohen only worked for him part time and accuses the lawyer of making up stories to reduce his legal exposure.

Trump made the comments as his White House struggled to manage the fallout from Cohen’s plea deal and the conviction of Trump’s former campaign chairman Manafort on financial charges. The president suggested that Cohen’s legal trouble stemmed from his other businesses, including involvement with the New York City taxi cab industry.

The back-to-back legal blows have raised speculation that Democrats would launch impeachment proceedings if they win the House of Representatives this fall. Trump argued the move could have dire economic consequences.

“If I ever got impeached, I think the market would crash. I think everybody would be very poor,” Trump said. He added: “I don’t know how you can impeach somebody who’s done a great job.”

Trump did not say whether he would pardon Manafort, but expressed “great respect” for him and argued that some of the charges “every consultant, every lobbyist in Washington probably does.”

Cohen, who says he won’t seek a pardon from Trump, pleaded guilty Tuesday to eight charges, including campaign finance violations that he said he carried out in coordination with Trump. Behind closed doors, Trump expressed worry and frustration that a man intimately familiar with his political, personal and business dealings for more than a decade had turned on him.

Yet his White House signaled no clear strategy for managing the fallout. Press secretary Sarah Huckabee Sanders insisted at least seven times at a briefing that Trump had done nothing wrong and was not the subject of criminal charges. She referred substantive questions to the president’s personal counsel Rudy Giuliani, who was at a golf course in Scotland. Outside allies of the White House said they had received little guidance on how to respond to the events in their appearances on cable news. And it was not clear the West Wing was assembling any kind of coordinated response.

In the interview, Trump argued, incorrectly, that the hush-money payouts weren’t “even a campaign violation” because he subsequently reimbursed Cohen for the payments personally instead of with campaign funds. Federal law restricts how much individuals can donate to a campaign, bars corporations from making direct contributions and requires the disclosure of transactions. 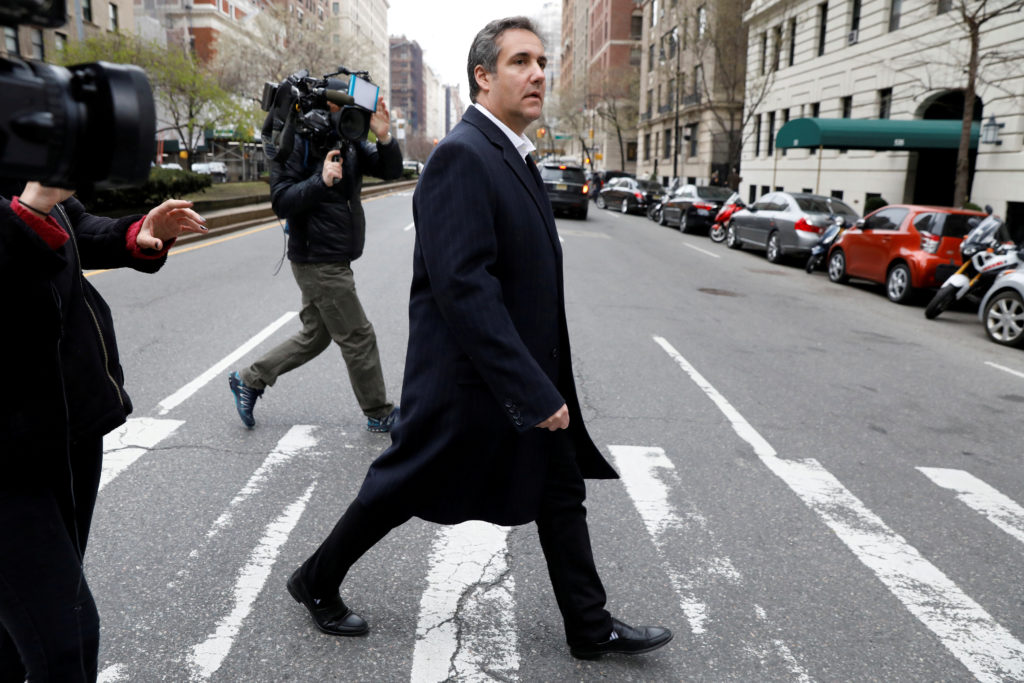 The financial activities of President Donald Trump’s personal lawyer, Michael Cohen, are under fresh scrutiny after a news report that information on Cohen was missing from a government database. REUTERS/Brendan McDermid/File Photo

Trump has insisted that he only found out about the payments after they were made, despite the release of a September 2016 taped conversation in which Trump and Cohen can be heard discussing a deal to pay McDougal for her story of a 2006 affair she says she had with Trump.

The White House denied the president had lied, with Sanders calling the assertion “ridiculous.” Yet she offered no explanation for Trump’s shifting accounts.

Trump’s national security adviser was pressed by a reporter during a news conference Thursday in Geneva about whether he was concerned that Trump posed a security risk.

“Honestly, have a little faith in the American people who elected a president,” John Bolton said.

Manafort faces trial on separate charges in September in the District of Columbia that include acting as a foreign agent.

Trump praised Manafort as “a brave man!” raising speculation the former campaign operative could become the recipient of a pardon as he argues the prosecution was an overreach by the Justice Department.

That Cohen was in trouble was no surprise; federal prosecutors raided his offices months ago. But Trump and his allies were caught off-guard when Cohen also pleaded guilty to campaign finance crimes, which, for the first time, took the swirling criminal probes directly to the president.

Both cases resulted, at least in part, from the work of special counsel Robert Mueller, who is investigating Russia’s attempts to sway voters in the 2016 election.

Cohen’s lawyer, Lanny Davis, has said Cohen has information “that would be of interest” to the special counsel.

READ MORE: What just happened? The 2-hour saga of yesterday made simple

Among Trump allies, the back-to-back blows from the Cohen and Manafort cases were a harbinger of dark days to come for the president.

Democrats are eagerly anticipating gaining subpoena power over the White House — and many are openly discussing the possibility of impeaching Trump — should they retake control of the House in November’s elections.

And even Trump loyalists acknowledged the judicial proceedings were a blow to the GOP’s chances of retaining the majority this year.

Debate swirled inside and outside the White House about the next steps and how damaging the legal fallout was for the president.

Allies of the president stressed an untested legal theory that a sitting president cannot be indicted — only impeached.

Former George W. Bush press secretary Ari Fleischer stressed that the revelations may be sordid but do not meet the constitutional bar of “high crimes and misdemeanors.”

Left: Attorney General Jeff Sessions says that while he's attorney general "the actions" of the DOJ "will not be improperly influenced by political considerations. I demand the highest standards, and where they are not met, I take action." REUTERS/Kevin Lamarque