“We have definitive evidence that Donald Trump committed a crime.”- Lanny Davis

Lanny Davis, an attorney for Cohen, said in an interview with the PBS NewsHour on Wednesday morning that his client had agreed to cooperate with federal prosecutors and share whatever he knows about the campaign’s dealings with Russia. Davis also said Cohen was willing to share more information about campaign finance violations.

“We have definitive evidence that Donald Trump committed a crime and a crime involving the corruption of American democracy,” Davis said of payments made to women who alleged affairs with Trump. “As far as I am concerned, that is an indictable offense.”

He added that Cohen, who once said he would “take a bullet” for Trump, had a change of heart after watching Trump be “reckless” as president.

READ MORE: What just happened? The 2-hour saga of yesterday made simple

Cohen pleaded guilty Tuesday to eight charges in federal court, including campaign finance violations specifically tied to his role in making hush payments to women who alleged affairs with Trump ahead of the 2016 election. Cohen could face between four and five years in prison, fines of up to $1 million and back taxes estimated at $1.4 million.

Cohen said in court Wednesday that he was directed by a “candidate for federal office” — which many have assumed to be Trump — to make the hush payments, reopening a debate about whether a president can be indicted.

Davis said he believed Trump committed federal crimes alongside Cohen by working on a plan to pay off the women.

“The evidence shows that Trump directed and coordinated, making Trump as much of a criminal as [Cohen] admitted to being,” Davis said. “It’s just that Mr. Trump won’t testify under oath and admit the truth that he is just as much guilty of violating campaign finance laws.”

Davis was not specific about what other information Cohen might be able to offer, though he said he believed Cohen “could address topics of interest to Mr. Mueller relating to whether Mr. Trump had advanced knowledge of the hacking of emails for political purposes.” 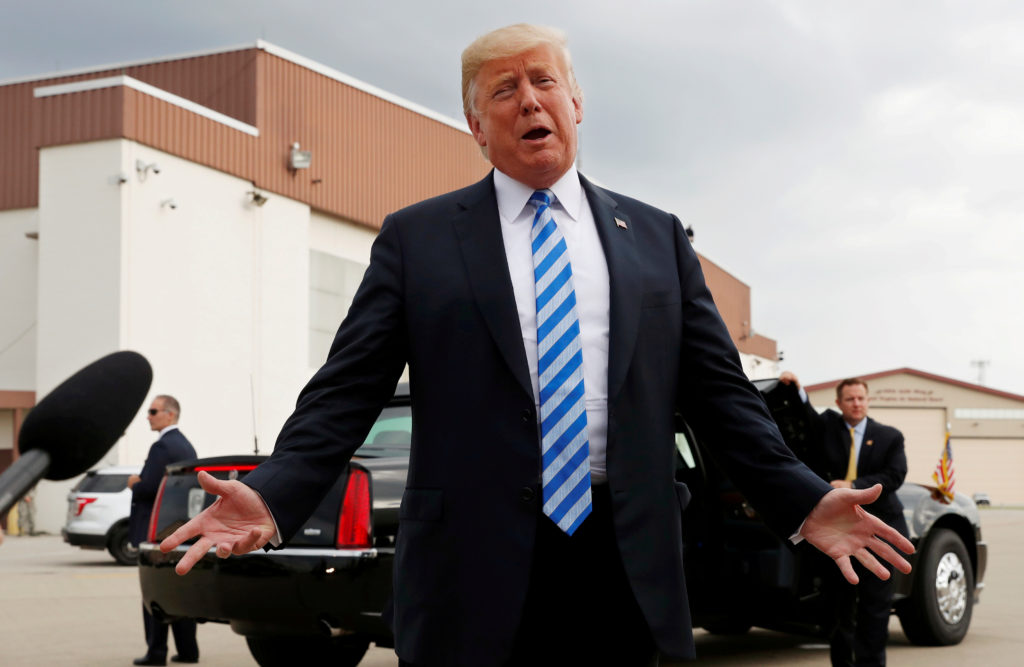 President Donald Trump speaks to the news media on the tarmac about the federal conviction of his former presidential campaign chairman Paul Manafort as the president arrives for a campaign event in Charleston, West Virginia, U.S. August 21, 2018. REUTERS/Leah Millis

This morning, Trump lashed out at Cohen in a series of tweets attacking a man who he once embraced as one of his closest confidantes.

“If anyone is looking for a good lawyer, I would strongly suggest that you don’t retain the services of Michael Cohen!” Trump tweeted Wednesday morning.

Later Wednesday, Trump told Fox News that the payments “didn’t come out of the campaign. They came from me.”

Cohen’s plea agreement does not spell out clearly that he will cooperate with the federal government.

Cohen’s plea agreement does not spell out clearly that he will cooperate with the federal government. Davis said he isn’t sure why.

“I have a client telling me I am willing to tell the truth to anyone who asks me. So that is the functional equivalent of the word ‘cooperate.’ I don’t know why … they didn’t use the word,” Davis said.

According to Davis, Cohen feels motivated in part because of Trump’s controversial news conference with Russian President Vladimir Putin earlier this summer in Helsinki, Finland, during which Trump appeared to side with Putin over the U.S. intelligence community on Russian interference in the election. Days later, Trump issued a clarification that he believed the assessment of top American intelligence officers. To Cohen, Helsinki was a breaking point, Davis said. It made him question the president’s loyalty.

Davis also said Cohen would not accept a pardon from Trump if the president offered.

“I believe that a pardon from Donald Trump would by definition be dirty,” Davis said, because Trump has “acted so corruptly in his business endeavors and in the number of lies that he utterly unapologetically articulates everyday as president of the United States.”

What does Michael Cohen’s guilty plea mean for Trump?