In Denver, Stakes for First Debate Are a Mile High 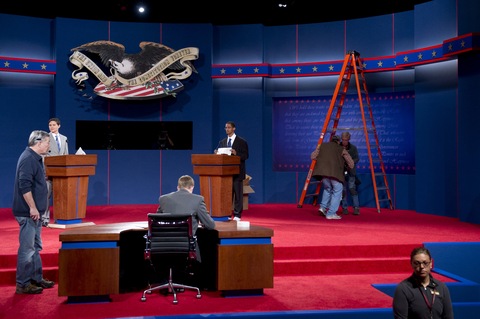 Students at the University of Denver participate in a rehearsal Tuesday for the first presidential debate. Photo by Saul Loeb/AFP/Getty Images.

Wednesday’s presidential debate offers President Obama and his rival Mitt Romney a fresh chance to appeal to the American people.

The stakes are high for each man, but it’s Romney who must deliver the debate performance of his political career if he wants to turn the contest around. As we’ve been noting in the Morning Line, the campaign teams have worked hard at setting expectations.

But when the timer begins, all bets are off. It may not matter if Romney gets off any of those “zingers” he’s been practicing or if the president is able to keep his answers succinct.

The Obama campaign released a memo from deputy campaign manager Stephanie Cutter previewing Wednesday’s debate. Cutter charged that Romney has offered “nothing more than platitudes” on key issues and challenges the GOP nominee to get specific.

“Romney can use tonight’s debate to fill in those details and finally, for the first time, explain his proposals or readjust his positions. Or he can spend 90 minutes doing what he does best: attacking the president, distorting his own record, and avoiding any and all details on his plans for this country,” Cutter wrote.

Do debates even matter? Judy Woodruff tackled that question in her latest edition of Judy’s Notebook, writing:

If they decide to give the same responses they’ve given throughout the campaign, that will tell us one thing – but if they decide to expand, go into more detail, or highlight points we haven’t heard before, that will send a different message. For 90 minutes, they’re on their own — no filter and no safety net.

Gwen Ifill also weighed in on the question with five myths about debates. In Gwen’s Take, she wrote about a moderator’s role in a debate and debunks the idea of “he who zings, wins,” with a reminder that Democrat Lloyd Bentsen has the best one in history i 1988 and never became vice president.

The forum, hosted by the NewsHour’s own Jim Lehrer, begins at 9 p.m. ET. Like they did during the conventions, Gwen and Judy will co-anchor the coverage, and they’ll be joined in studio by Mark Shields and David Brooks.

You can watch it in full on PBS or on the NewsHour livestream. Our robust online effort kicks off at noon with the Political Checklist and continues all day with interviews and analysis from NewsHour regulars. After the debate, Christina will host a Google Plus hangout with undecided voters.

Ahead of Wednesday night’s encounter, one new battleground state poll shows the president with a commanding lead over Romney, while two others indicate the race is tightening.

Mr. Obama holds a 51 percent to 43 percent advantage among likely voters in Ohio, according to the latest NBC News/Wall Street Journal/Marist survey, up slightly from a seven-point lead three weeks ago.

As part of the campaign’s final sale to voters, Team Romney released a television ad Wednesday that has the GOP nominee speaking directly to the camera as he did in a minute-long spot unveiled late last month.

“We should measure our compassion by how many of our fellow Americans are able to get good paying jobs, not by how many are on welfare,” Romney says in the ad, part of the campaign’s ongoing response to the fallout from “47 percent” video that surfaced last month.

Watch the spot here or below:

The NewsHour’s Jeffrey Brown set out for the Tar Heel State to gauge enthusiasm among a critical constituency for the president. Mr. Obama’s victory there four years ago was the first by a Democrat since 1976, helped in large part by a huge turnout by African-Americans. But with enthusiasm ebbing over the down economy, turnout may be too unpredictable to know which way the state will swing in 2012.

Jeff talked with voters in every nook and cranny to get a sense of the ground game in a state that’s remained remarkably close. Watch his piece here or below:

Christina also got the behind-the-scenes scoop about Jeff’s moment in the ring in a special edition of the Political Checklist.

Watch that here or below.

And politics production assistant Allie Morris collected voter voices from North Carolina in her latest “Listen to Me” blog post.

Ahead of the debate, the NewsHour has a collection of rich interviews conducted by Lee Banfille that we’ve posted online.

Presidential historian and NewsHour regular Richard Norton Smith noted that the style and delivery of the candidates could be more important than any of the policy details that are discussed:

And presidential historian Michael Beschloss, also a NewsHour regular, pointed out that it should be worrisome that some voters rely heavily on the debates for information about the candidates and their ideas:

The comments from Gwen, Smith and Beschloss come from Banville’s newly released e-book, “Debating Our Destiny: Presidential Debate Moments That Shaped History.” The book is published by MacNeil/Lehrer Productions, which also produces the NewsHour.

The NewsHour also looked at how the debates can be used in the classroom.

Here is your guide to our coverage.

The nonpartisan group notes, “They’ve never paid for more than 68 percent of Medicare costs — that was in 1980 — and their share of Medicare revenue has been declining steadily for 30 years.”

Yup. RT @buzzfeedben: Akin In 2008: Doctors Give Abortions To Women “Who Are Not Actually Pregnant” buzzfeed.com/rebeccaberg/ak…

Will you be watching tomorrow’s debate w/ @newshour‘s Jim Lehrer? Take a sneak peek at our debate set bit.ly/PsCST8