PHOENIX — Arizona Republicans and Democrats agreed Friday to give rural voters an extra chance to fix problems with their ballots in the count of the state’s tight Senate race, resolving a GOP lawsuit that sought to stop urban voters from using those very same procedures.

The settlement was technically between Republicans and the state’s county recorders, but Democrats agreed to it as it was announced in a Phoenix courtroom Friday afternoon. Arizona’s 14 counties now have until Nov. 14 to address the issue.

The Republican lawsuit alleged that the state’s county recorders don’t follow a uniform standard for allowing voters to address problems with their mail-in ballots, and that Maricopa and Pima counties improperly allow the fixes for up to five days after Election Day.

Democrat Kyrsten Sinema has jumped into a slight lead over Republican Martha McSally in the midst of the slow vote count. 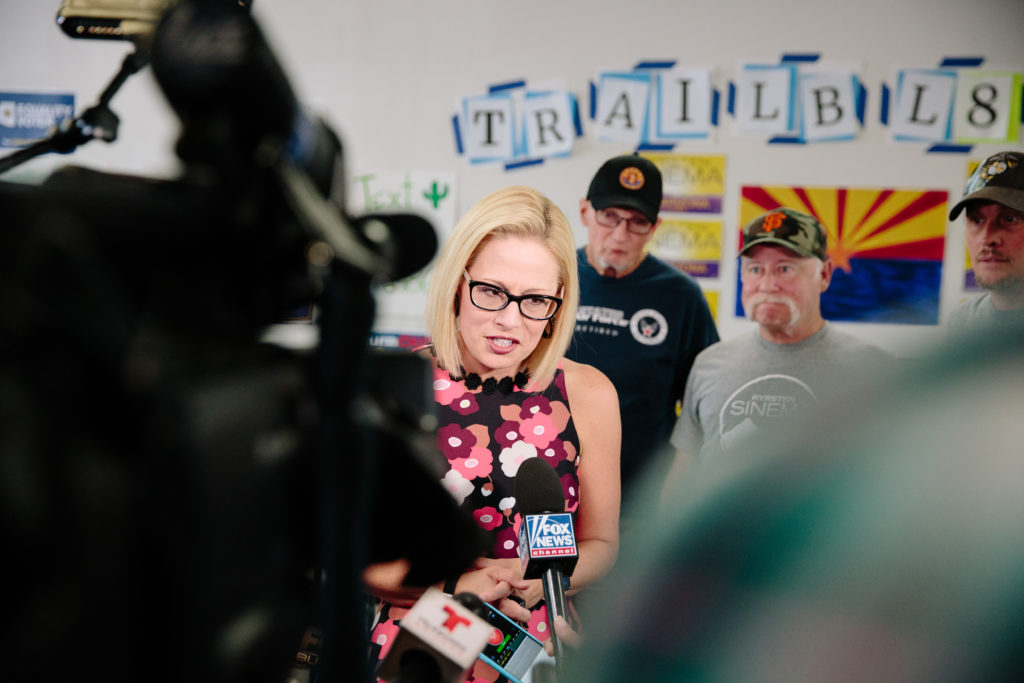 Krysten Sinema, Democratic Senate candidate from Arizona, speaks to members of the media during a campaign event in Phoenix, Arizona. Photo by Caitlin O’Hara/Bloomberg via Getty Images

Four local Republican parties filed the lawsuit Wednesday night challenging the state’s two biggest counties for allowing voters to help resolve problems with their mail-in ballot signatures after Election Day. If the signature on the voter registration doesn’t match that on the sealed envelope, both Maricopa and Pima County allow voters to help them fix, or “cure” it, up to five days after Election Day.

Many other counties only allow voters to cure until polls close on Election Day. Now, all will follow the standard set by Maricopa, Pima and two other rural counties that allow for post-Election Day cures.

Only a few thousand votes would be affected by the issue, but every one counts in the razor-close U.S. Senate race.

At a brief hearing Thursday, a Maricopa County official said only about 5,600 ballots are at affected in her county and the rate is similar in the 14 smaller counties. More than 2.3 million votes were cast statewide.

The political overtones of the lawsuit were unmistakable. On Thursday, Sinema jumped into a minuscule lead of about 9,000 out of 1.9 million votes counted after trailing since Tuesday. Her lead came from the two counties singled out by Republicans in their lawsuit, Maricopa and Pima Counties.

On Friday, Republicans escalated their attacks on Democrats, claiming they were trying to disenfranchise rural voters — even though Democrats had little do with how the rural counties chose to count ballots. Those counties are predominantly run by Republicans. Democrats, in turn, said the GOP was trying to nullify cast ballots.

The race remained too close to call Friday with more than 400,000 ballots still uncounted. Maricopa County Recorder Adrian Fontes said counting may continue until Nov. 15. “We know there’s urgency out there, but we want to get it right, not quick,” he said.

Arizona is notoriously slow at tallying ballots even though about 75 percent of votes are cast by mail. Each of those ballots must go through a laborious verification process.

READ MORE: 10 key lawmakers to watch in the new Congress