LAS VEGAS — The Nevada caucus, the third contest in the Democratic presidential race, is Saturday. Here are six questions going into that fateful vote.

HOW WELL DOES SANDERS DO?

Sen. Bernie Sanders of Vermont has high expectations going into the caucus. He is leading national polls and his campaign has a huge footprint in Nevada, a state he narrowly lost to Hillary Clinton in 2016.

But Sanders also had lofty prospects going into New Hampshire last week because he won that state by 22 points in the 2016 primary, and he only eked out a narrow victory over former South Bend Mayor Pete Buttigieg.

Nothing’s guaranteed Saturday, especially in Nevada, whose young caucuses (this is only their fourth iteration) are unpredictable.

If Sanders wins, he solidifies front-runner status heading into South Carolina next week and, more important, into critical Super Tuesday primaries on March 3. But if something goes wrong, or he only barely pulls out a win, it will intensify questions about whether the self-declared democratic socialist can extend his support beyond his fervent base.

HOW WILL LABOR FLEX ITS MUSCLE?

Sanders and Joe Biden have long held themselves out as the champions of organized labor. Nevada will offer a fresh test of their appeal.

The Culinary Union, which represents many of the workers in the casino and hotel industry, is one of the most powerful political forces in the state. Its endorsement was coveted by all of the candidates, but the union decided to not endorse. In 2008, the union’s decision to back Barack Obama was critical to his success in the state. 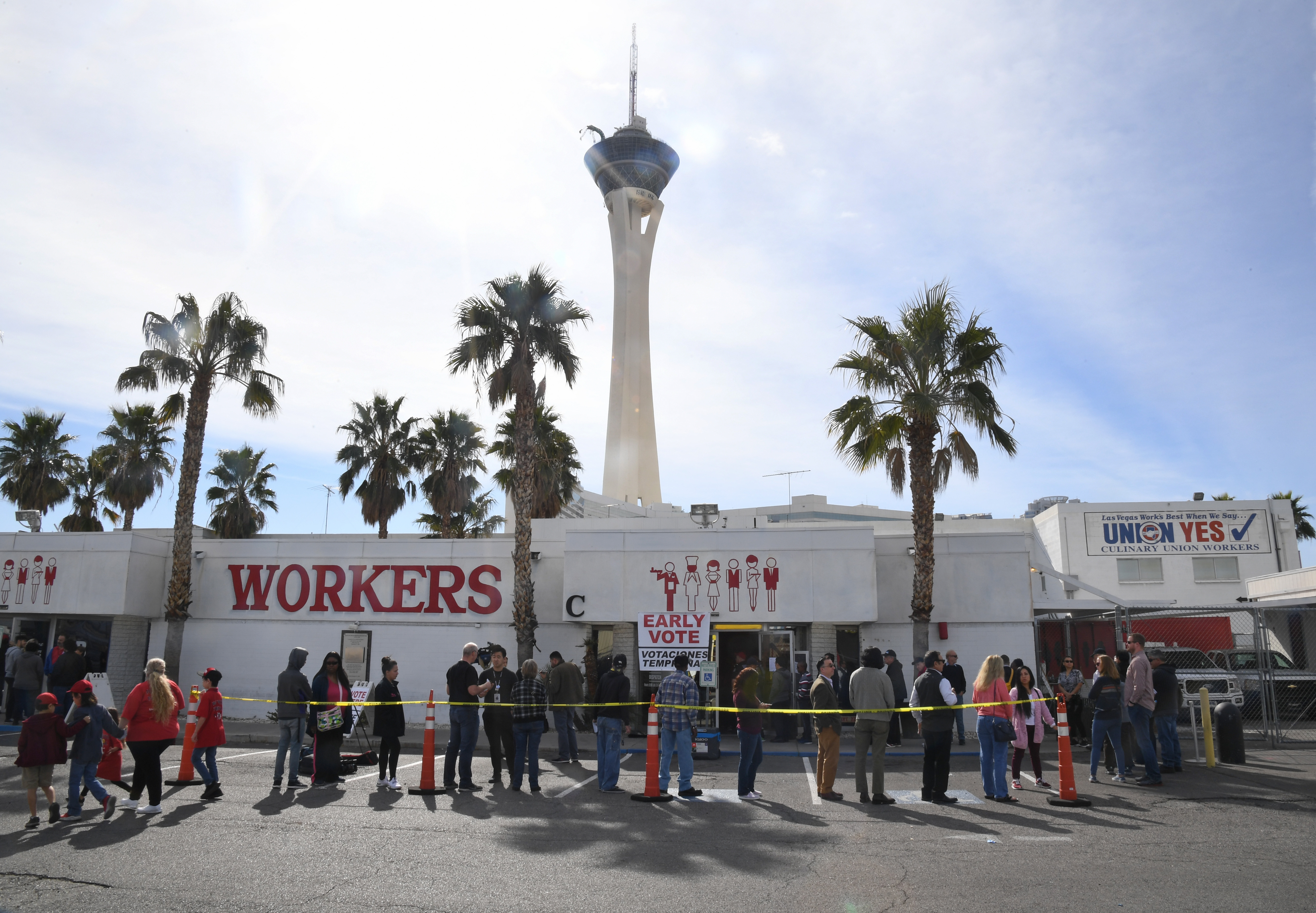 LAS VEGAS, NEVADA – FEBRUARY 15: Voters line up outside the Culinary Workers Union Hall Local 226 on the first day of early voting for the upcoming Nevada Democratic presidential caucus at on February 15, 2020 in Las Vegas, Nevada. Nevada is the first caucus state to offer early voting. (Photo by Ethan Miller/Getty Images)

Though Sanders would seem a natural ally, many union members prize the health care that comes with their jobs as a result of their membership and do not embrace Sanders’ plan for “Medicare for All”. Biden has hammered on this point, as he critically needs union members’ backing.

HOW HIGH IS TURNOUT?

Nevada Democrats have been heartened that their experiment with early caucus voting led to nearly 75,000 people marking preference cards in four days of initial balloting before the main event Saturday. That’s close to the 84,000 who voted in 2016. After a disappointing turnout in Iowa, Democrats hope Nevada shows their voters are enthusiastic enough about the election to defeat President Donald Trump in November.

Some Democrats hope Nevada surpasses the 118,000 who showed up at the 2008 caucuses when Obama faced Clinton. But Democrats should be careful about declaring victory based on raw numbers. There are more Democrats in fast-growing Nevada now than in 2008, when more than one-quarter of all Democrats participated in the caucus. The number of caucus participants needed for 2020 to surpass that 2008 rate would be above 150,000.

WILL NEVADA WINNOW THE FIELD?

This is the musical chairs portion of the primary. Normally, at the end of each contest, at least some candidates have to drop out due to poor performance and lack of funds.

It hasn’t worked that way so far because the field has been so evenly split, but that can’t last forever. Will Nevada be the end of one of the six main candidates? If not, will a disappointing finish in the state hasten an eventual exit?

Even if someone drops out, there’s another Democrat, billionaire former New York Mayor Mike Bloomberg, waiting on the ballot on Super Tuesday states, making it likely Democratic voters will still have numerous choices going into the busiest stretch of primary season. This is not necessarily a good thing.

WHAT DO MINORITY VOTERS DO?

After two early states that are overwhelmingly white — Iowa and New Hampshire — Nevada may change the picture. The state is among the most diverse in the nation. And even though caucuses require a greater investment of time, which can make it harder for minorities to participate, the event will feature a far more diverse electorate.

The problem is there is no reliable polling or data that will tell us how different demographic groups split. That’s because highly transient Nevada is notoriously difficult to survey. Still, by studying precinct level data, analysts and campaigns will glean indications of how candidates did.

Will Buttigieg and Minnesota Sen. Amy Klobuchar be able to broaden their appeal to Latinos, African Americans and Asians? Will Sanders, as he has been hoping, assemble a multi-ethnic coalition? Will Biden hold onto the minority voters that were once presumed to propel him to the nomination?

Nevada demographically resembles the diverse array of states scheduled to vote on Super Tuesday, when nearly one-third of the total delegates in the contest are up for grabs. It may hint at what lies ahead in the race.

DID THE DEBATE HAPPEN IN TIME FOR WARREN?

Many months ago, Nevada politicos viewed Massachusetts Sen. Elizabeth Warren as the Democrat to beat in their state. She assembled a team of operatives to push her populist message of structural change that was expected to resonate with Nevada’s working-class Democrats.

But then Warren’s national position began to erode, and she limped into Nevada a political afterthought.

That changed on Wednesday night when Warren delivered a powerful debate performance highlighted by her skewering of Bloomberg. She saw an avalanche of money and attention. But a huge share of Nevada had already voted by then.

After weathering a disappointing fourth-place showing in New Hampshire, which borders her home state, Warren desperately needs a win. Will Nevada make her the next comeback kid?