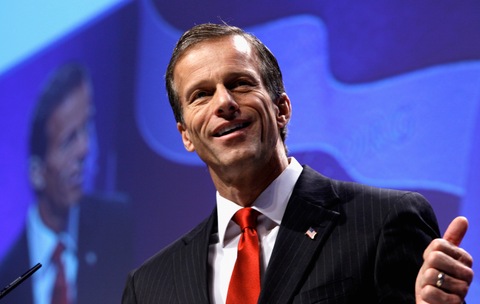 The second-term South Dakota senator announced Tuesday he would not seek the Republican presidential nomination next year. “At this time, I feel I am best positioned to fight for America’s future here in the trenches of the United States Senate,” Thune wrote in a statement.

“There is a battle to be waged over what kind of country we are going to leave our children and grandchildren and that battle is happening now in Washington, not two years from now,” Thune added.

Thune, 50, ran unopposed last November to win another six-year term in the Senate. He currently ranks fourth in the Senate Republican leadership, where he is chairman of the GOP policy committee.

With Arizona Sen. Jon Kyl, the Senate Republican Whip, retiring at the end of his term in 2013, Thune could be positioning himself for a run at the No. 2 leadership post in the GOP conference. His competition would likely include Sens. Lamar Alexander, R-Tenn. and John Cornyn, R-Texas.

Thune becomes the second rumored candidate to decide against a presidential bid. Rep. Mike Pence, R-Ind., announced last month he would not run for president, but would instead consider on a possible gubernatorial campaign in the Hoosier state.