While President Donald Trump is spending more of his waning days in office on meritless attempts to overturn the election, the White House coronavirus task force is privately warning states more must be done to address the worsening pandemic ahead of an anticipated post-Christmas surge.

The task force, which is headed by Vice President Mike Pence, urged governors and state health officials to help prevent a post-Christmas surge by telling citizens: “To preserve our hospital system for you, we need you to wear masks, physically distance, wash hands, and avoid crowds and social gatherings beyond your immediate family.”

These “difficult but temporary changes in personal behavior are key to limiting disease and death” until the general public gets access to the vaccine next spring and summer, reads the letter from the task force, which includes Dr. Deborah Birx, National Institute of Allergy and Infectious Diseases Director Dr. Anthony Fauci and Centers for Disease Control and Prevention Director Robert Redfield.

The dire warnings come as the president is spending hours in near daily meetings to discuss efforts to overturn President-elect Joe Biden’s election victory, and after he’s relegated public duties around the pandemic to Pence.

In his infrequent public comments about the ongoing pandemic, the president has focused on the emergency approval and distribution of the Moderna and Pfizer/BioNTech coronavirus vaccines — a bright spot in the prolonged pandemic, which has killed more than 326,000 Americans, according to Johns Hopkins University.

“CDC puts out their guidelines, and they’re very important guidelines, but I think this: I think that the vaccine was our goal,” Trump said at a White House event earlier this month that was held namely to celebrate the administration’s vaccine accomplishments. “Over the next few months,” Trump predicted, “the numbers should skyrocket downward.”

While the federal government is expecting to have allocated 20 million doses by the end of 2020, the president’s own task force has warned states that the vaccine “will not substantially reduce viral spread, hospitalizations, or fatalities” from the virus “until the late spring” when more of the population has access to it.

“Behavioral change and aggressive mitigation policies” are the only ways to slow the pandemic during the next few months, a recent report warned.

Public health officials worry the president’s focus on the vaccine, without continuing to encourage public health mitigation measures, will give Americans a false sense of security and could unleash new waves of cases while states navigate vaccine distribution this winter.

“We already know that there are groups or individuals in our state that don’t take this as seriously as they should,” said Arkansas’ Health Secretary Dr. Jose Romero, who heads the CDC advisory committee in charge of recommending which populations should be prioritized for the vaccine. “And we don’t want others to lower their guard, especially this time of year.”

Some governors have also expressed those same concerns to the White House.

On a conference call with Pence this week, Massachusetts’ Republican Gov. Charlie Baker said more should to be done to raise awareness that Americans still need to “stay vigilant” and follow CDC guidelines through the holiday season so states’ health care systems aren’t again overwhelmed in the months before the vaccine is available to the general public. Baker said his state saw a 100 percent increase in cases over Thanksgiving and that he was worried about additional surges over Christmas and New Year’s as people increasingly gather with those who live outside their household. 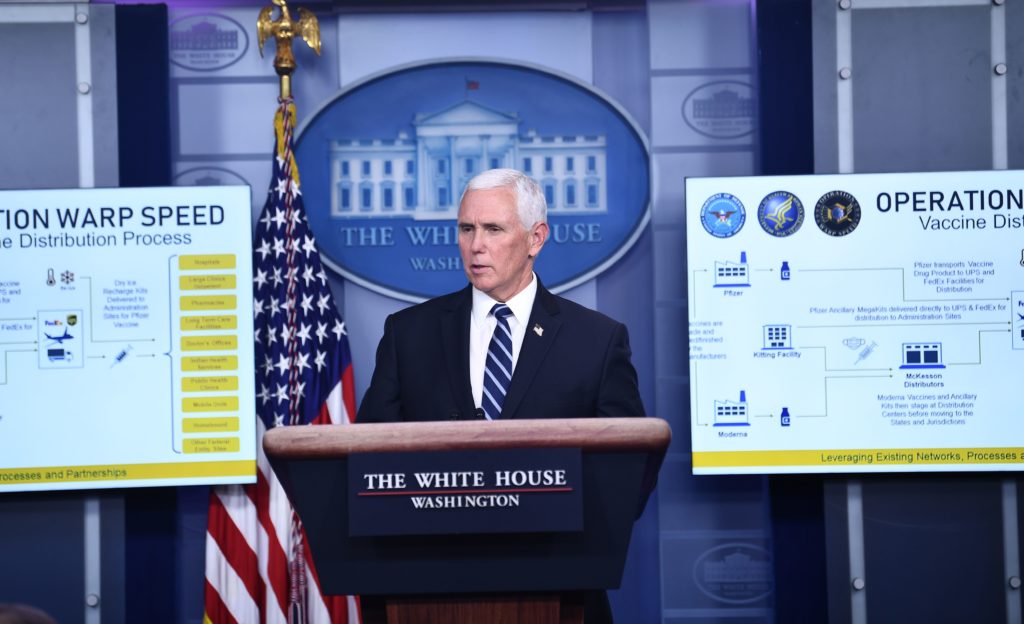 On that call, Pence didn’t directly reply to the concerns. He did note rising cases on the coasts, but said it was promising that some Midwest states hit the hardest before Thanksgiving were not yet seeing the massive post-holiday surge public health officials feared.

When Baker raised similar concerns about the lack of communication from the federal government on a conference call with Health and Human Services Secretary Alex Azar and vaccine officials last month, Gen. Gustave Perna, head of logistics for the government’s vaccine program, told Baker they were working on “a national campaign” to raise awareness about the vaccine, which would be rolled out at a later date. Laura Trueman, head of HHS intergovernmental affairs, added that the administration was trying to “balance” its messaging on the vaccine, but made clear the main goal was to provide hope.

Officials in Oklahoma City, where cases and hospitalizations have hit record highs in recent weeks, say they’ve learned to live without much guidance from the president or the federal government.

“It would be great to have stronger messaging from the federal government right now, but it is what it is,” Republican Mayor David Holt said. “We have long since learned that we’ve got to move forward with or without the White House.”

The reprieve has been welcomed by some state and local officials, who have for months had to battle a deluge of false information and mixed messaging from the president regarding the virus.

“It may actually be helping us right now,” said Doug Gieryn, a county health director in northeast Wisconsin, which experienced the country’s fastest growing coronavirus outbreak this fall. “Less information is better than misinformation,” Gieryn said, noting virus levels in the region are still high and could quickly spike again.

Trump, who had the virus in October, has yet to receive a vaccine, though White House officials say he’s “open” to getting it. Pence and Biden both respectively received their first of two vaccine injections on live television in an effort to instill public trust in the vaccine. Roughly a third of Americans were still hesitant or didn’t plan to get the vaccine, according to a PBS NewsHour/NPR/Marist poll taken in early December. Both Pence and Biden encouraged the public to keep up mitigation measures amid the vaccine rollout.

“We’re still in the thick of this,” Biden said after getting his shot on Monday. “There are millions of people out there that are going to need this.”

Senior White House and Biden transition officials, who have spoken on background to the NewsHour, said they don’t expect Trump to take on more of a public leadership role on the pandemic in his waning days in office, even as the president is continuing to publicly and privately complain that he’s not getting more praise for the vaccine.

A senior Biden transition official said the transition team would welcome Trump getting a vaccine publicly and encouraging people to take the virus seriously over the next few months before most Americans have access to the vaccine.

But, the official said, “Given what’s happened over the past year, I don’t think we’re holding our breath on that.”