States step into void left by exit from Paris climate accord

In announcing his decision to withdraw the United States from the Paris climate accord, President Donald Trump said Thursday that he was “elected to represent the citizens of Pittsburgh, not Paris.”

The Democratic mayor of Pittsburgh immediately shot back on Twitter: “As the Mayor of Pittsburgh, I can assure you that we will follow the guidelines of the Paris Agreement for our people, our economy & future,” Mayor Bill Peduto tweeted.

As the Mayor of Pittsburgh, I can assure you that we will follow the guidelines of the Paris Agreement for our people, our economy & future. https://t.co/3znXGTcd8C

A number of city and state leaders quickly echoed Peduto’s response. At least 87 mayors had adopted their own version of the Paris accord by 3:20 p.m. Friday. In a statement Thursday, the group promised to “increase our efforts to cut greenhouse gas emissions, create a clean energy economy, and stand for environmental justice.”

Cities and states are likely to continue the trend away from coal-powered electricity and toward renewable energy despite Mr. Trump’s decision to withdraw from the Paris deal. The question is whether that trend will slow without a federal mandate pushing states to cut carbon emissions.

The Paris agreement calls on countries to reduce greenhouse gas emissions in an effort to keep global warming below two degrees Celsius. For its part, the United States pledged to cut its emissions 26 percent from 2005 levels by 2025.

Analysis: How much carbon will Trump’s climate policies add to the atmosphere?

The key to reaching that benchmark was the Obama administration’s Clean Power Plan. The plan, announced by President Obama in 2015, set restrictions on emissions from power plants — the single largest source of carbon emissions in the U.S. — and required states to create individual plans for how they would reduce carbon emissions.

But the Supreme Court stayed the Environmental Protection Agency’s implementation of the Clean Power Plan in February 2016. The plan took another hit last March when Trump signed an executive order to roll back the program and halt many other Obama-era climate initiatives. For many on the left, Trump’s decision to withdraw from the Paris accord was a final blow to Obama’s vision of making the U.S. a global leader on climate change.

Cities and states are likely to continue the trend away from coal-powered electricity and toward renewable energy despite Mr. Trump’s decision to withdraw from the Paris deal. The question is whether that trend will slow without a federal mandate pushing states to cut carbon emissions.

Trump did not said exactly how the U.S. would withdraw from the Paris agreement. But the White House appears likely to follow the exit provisions laid out in the deal, which take roughly four years to complete, meaning a formal withdrawal might not take place until the day after the 2020 presidential election. The timeline could make the Paris deal a major issue in next year’s midterm election and Trump’s reelection bid.

In the meantime, with the Clean Power Plan on hold and the U.S. on track to pull out of the Paris accord, states won’t risk violating federal regulations if they fail to cut their own carbon emissions. In his speech announcing the withdrawal in the White House Garden, President Trump said the move lifted a burden from the country.

But while some White House supporters cheered the decision, the reaction among states was mixed — and several vowed to push on with emissions reduction goals despite Trump’s decision.

In California, state leaders said the president was creating a leadership vacuum in the world’s efforts to combat climate change.

“The world is not waiting for Donald Trump,” Gov. Jerry Brown, D-Calif., told the NewsHour on Thursday. “He has given a body blow to the cause of environmental sustainability, but we will take it and we will respond. We’re on the field of battle, and we’re going to overcome.”

Brown has been working with a number of countries, including Mexico and Canada, to address climate change. On Friday, he flew to China to meet with the country’s leaders on climate change policy.

California has a long track record on climate change Brown can point to in his talks with China. In 2006, the state passed a law to reduce its greenhouse gas emissions to 1990 levels by 2020.

“It helps that California has managed to reduce its emissions while growing its economy,” Cara Horowitz, the co-executive director of the Emmett Institute on Climate Change and the Environment at UCLA, wrote in an email. “That’s a lesson others are eager to learn from.”

Tillerson: US still will cut emissions despite Paris pullout

California’s wind energy production has more than doubled since that year, according to California Energy Commission data, and solar power has increased by an eye-opening 2,342 percent. The state has added more than 1.3 million jobs overall since the 2006 law, and its unemployment remains in line with the national average, according to federal labor statistics. According to the Solar Foundation, California led the nation with 100,050 solar industry workers in 2016 — more than the next nine states combined.

“California will continue to lead on climate change,” Horowitz said. She added: “Its own emission reduction targets are adopted into state law and won’t change because of Trump’s decision.”

A number of other left-leaning states are following suit. New York and Washington’s governors said Thursday they were partnering with California to create what they called the U.S. Climate Alliance. By Thursday evening, a total of 10 governors had signed on. 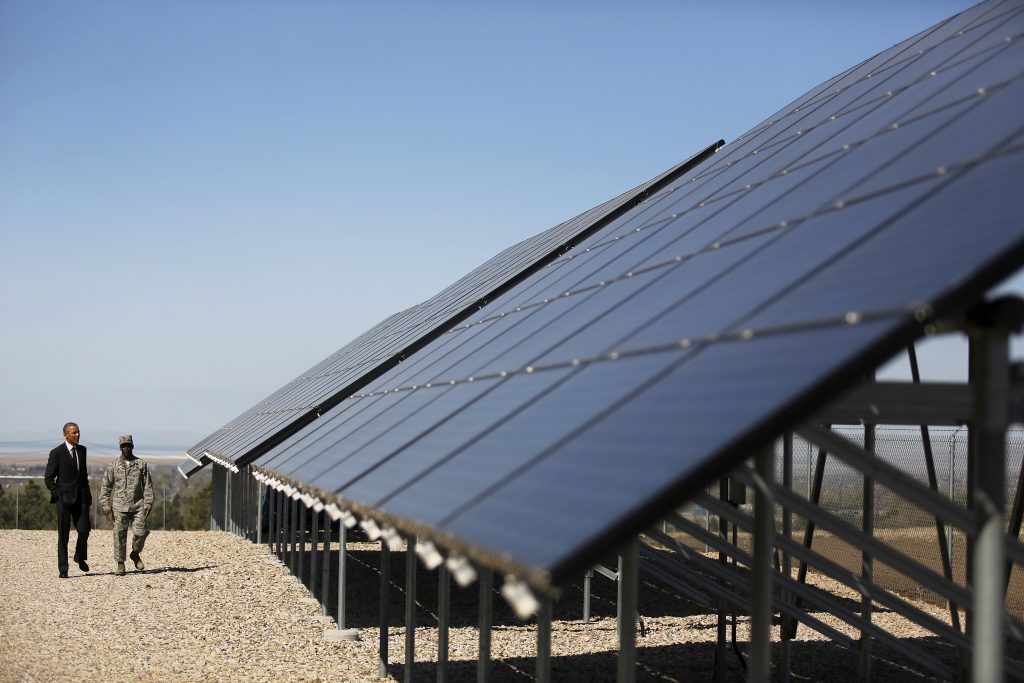 The Democratic governors’ response to Trump’s decision was predictable. But it’s also unlikely that conservative states will drastically slow the trend of reducing their carbon emissions.

Market forces have already forced many companies to switch from coal to natural gas, which emits about half as much carbon dioxide. The cost of renewable energy like wind and solar has also declined in recent years to become more competitive with fossil fuel, and much of America’s clean energy is produced in red states that voted for Trump.

Utah is a good example. Trump won the state by 18 points last year, and it hasn’t had a Democratic governor since 1985. Nevertheless, Utah is in the middle of a solar boom. Solar now accounts for about 10 percent of Utah’s energy mix; the state’s solar industry grew by almost 65 percent from 2015 to 2016. In contrast, the solar industry nationwide grew 25 percent over the same period.

“The state has a plan to continue to provide value to the economy and the environment, including a greenhouse gas initiative, and further reductions in greenhouse gases are expected going forward based on Utah’s commitment to markets, competition and investment in technology,” Nelson said.

Utah’s investments in clean energy have paid off, leading to a 15 percent reduction in carbon emissions over the last eight years, according to the U.S. Energy Information Administration.

Utah’s investments in clean energy have paid off, leading to a 15 percent reduction in carbon emissions over the last eight years, according to the U.S. Energy Information Administration.

And Utah’s story is similar to a number of other red states, which rank among the leaders in renewable energy. Wyoming leads the country in renewable energy development per capita. Texas is the leading U.S. wind energy producer — and now produces more wind energy than the next three states combined. In Kentucky — whose GOP senators Rand Paul and Senate Majority Leader Mitch McConnell urged President Trump to withdraw from the Paris accord — a coal company is planning to build the state’s largest solar farm on a reclaimed coal mine.

Those economic factors matter in most states regardless of the politics, said Vicki Arroyo, the executive director of the Georgetown Climate Center.

Arroyo said states began taking more initiative after President George W. Bush announced his opposition to the Kyoto Protocol, a 1997 international treaty that set global emissions standards. The Clinton administration signed the treaty the following year but it remains unbinding for the U.S., because the deal hasn’t been ratified by the Senate. The Bush administration said in 2001 that it would not enforce its Kyoto Protocol emissions obligations.

“What you’ve seen is states that have taken a leadership position since the Bush administration [came] in and pulled back from Kyoto,” Arroyo said. Since then, states have “actually seen that moving forward with a clean energy economy brings a lot of local benefits.”

“President Trump made the right call in leaving a deal that would have put an unnecessary burden on the United States,” McCarthy said in a statement.

“My hope is that we will continue to advance renewable energy in the state regardless of what is happening at the national level,” said Sarah Wright, the executive director of the advocacy group Utah Clean Energy. “But progress may slow down because we don’t have the impetus to move forward more quickly.”

Left: California Governor Jerry Brown is one of dozens of local leaders who have pledged to fill the void left by President Donald Trump's withdrawal from the Paris climate accord. File photo by REUTERS/Lucy Nicholson.