With the swift impeachment of President Donald Trump on Wednesday, the House shifted the battle over his role in the storming of the Capitol — and his political future — from one chamber to the other, with the Senate now tasked with conducting an unprecedented, divisive trial in the opening days of a new administration.

By moving to impeach Trump for a second time, Democrats gambled that a Senate trial wouldn’t impede efforts to confirm President-elect Joe Biden’s Cabinet nominees nor slow down his ambitious plans to bring the coronavirus pandemic under control.

“The Senate can walk and chew gum [at the same time] and they’re going to have to,” said Rep. Eric Swalwell, D-Calif. “Covid relief, helping the president-elect put a cabinet together — we’re all going to have to do a little bit more.”

But voting to impeach Trump for a record second time — only two other presidents have been impeached, and each only once — ensured he will remain at the center of the political debate after he leaves office, making it harder for Biden and Democrats to shift the focus away from the riot at the Capitol last week and on to his agenda to “build back better.”

Trump encouraged supporters to march on the Capitol on Jan. 6 to protest Biden’s victory as Congress was gathered in a joint session for an official count of the Electoral College votes. His speech followed a monthslong effort by Trump and his closest allies to discredit the legitimacy of the election with baseless and disproven claims of voter fraud.

A riot broke out at the Capitol not long after Trump concluded his speech and returned to the White House. Five people died and dozens were injured in the worst security breach on the Capitol complex in two centuries.

The House voted 232-197 to impeach Trump on one article of “incitement of insurrection.” Ten Republicans voted to impeach, joining 222 Democrats.

Ahead of Wednesday’s vote, questions swirled about when the trial would start, and whether Senate Majority Leader Mitch McConnell, R-Ky., would fast-track a trial to remove Trump from office before his term expires next week.

McConnell dismissed speculation Wednesday that he planned to start the trial immediately, and he noted there was no way the Senate could conclude before Biden takes office, and Trump exits, on Jan. 20.

“Given the rules, procedures, and Senate precedents that govern presidential impeachment trials, there is simply no chance that a fair or serious trial could conclude before President-elect Biden is sworn in next week,” McConnell said in a statement.

“Even if the Senate process were to begin this week and move promptly, no final verdict would be reached until after President Trump had left office,” he said.

The comments signaled the timeline and logistics surrounding the trial will fall to Sen. Chuck Schumer, D-N.Y. Schumer is set to take over as majority leader when two new Georgia Democrats are officially sworn in after winning runoff races in Georgia last week.

But McConnell also appeared to encourage the impeachment effort, after condemning the attack on the Capitol. The normally tight-lipped Kentucky Republican signaled earlier this week that he was pleased House Democrats decided to impeach Trump, according to a report from the New York Times.

In a note to Republican senators Wednesday, McConnell said he had “not made a final decision on how I will vote” in the Senate trial.

The statement left open the possibility that McConnell would vote to convict Trump, and that he would support other Republicans doing so. 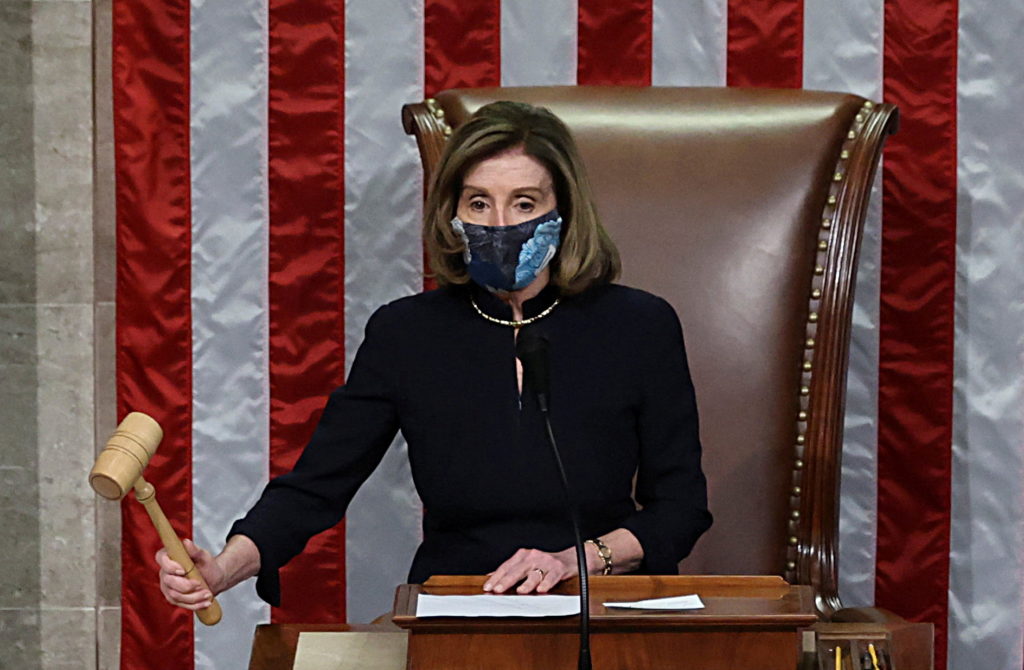 House Speaker Nancy Pelosi presides over the vote to impeach President Donald Trump for a second time, a week after his supporters stormed the Capitol building, on the floor of the House of Representatives. Photo by REUTERS/Jonathan Ernst

If Trump were convicted, the Senate could pursue an additional vote that would bar him from holding federal office in the future, blocking him from running for president in 2024. Trump has reportedly considered announcing that he will seek a return to the White House. Even floating that as a possibility after he leaves office would freeze the 2024 Republican field and make it harder for Republicans to distance themselves from him.

McConnell’s support for the impeachment effort “shook everyone” in Congress, said Rep. Bill Keating, D-Mass. “No one anticipated what came from his office saying what the president did is clearly impeachable and that he’s glad that the House” took up a second impeachment.

But as the impeachment action shifts to the Senate, it’s still unclear how many Republicans are really willing to buck Trump after largely sticking with him through a tumultuous presidency.

A conviction requires a supermajority vote in the Senate, meaning that at least 17 Republicans would have to vote to convict Trump, along with the entire Democratic caucus, since Democrats cannot afford to lose a single vote.

Democrats will control 50 seats in the Senate once the new Georgia senators are sworn in, giving the party little wiggle room in an impeachment trial and on other tough votes.

Just one Republican, Sen. Mitt Romney of Utah, voted to convict Trump in his first impeachment trial last year. The House charged Trump with abuse of power and obstruction of Congress for withholding aid from Ukraine in an effort to pressure the country to launch an investigation into Biden and his son, Hunter Biden.

House Republicans argued Wednesday that the second impeachment vote proved the party had not broken with Trump, given that only 10 GOP members voted with Democrats.

Still, the vote exposed a rift among congressional Republicans as they weighed how to respond to the riot — and how much to distance themselves from Trump in his final days in office.

Minority Leader Kevin McCarthy, R-Calif., said Wednesday that while he opposed impeaching Trump over the deadly riot, he did hold the president accountable. Rep. Liz Cheney, R-Wyo., the third-ranking House Republican, voted to impeach, joining the small group of Republicans who decided the president’s actions rose to the level of impeachable offenses.

“The president violated his oath of office, he betrayed his responsibilities to the Constitution, and I believe he incited an insurrection,” said Rep. Peter Meijer, R-Mich., who was sworn in just days before the attack on the Capitol. Meijer voted to impeach.

But the backlash against Meijer and other Republicans who voted to impeach Trump offered a cautionary tale for Senate Republicans as they prepared for a divisive trial.

“I’ve already had folks say they’re going to march on my house. I’ve been told to kill myself, I’ve been called a tyrant more times than I can imagine, and I’m sure there’s some death threats out there that we’re sifting through,” Meijer said after the vote. “It’s a sad fact that that’s the territory these days.”

Correction: This piece has been updated to reflect the additional vote required after a Senate conviction to block Trump from future runs for president.

Left: The House of Representatives voted to impeach President Donald Trump on January 13, 2021, after Vice President Mike Pence declined to use the 25th amendment to remove him from office after protestors breached the U.S. Capitol last week. Photo by Stefani Reynolds/Getty Images