10 House Republicans voted to impeach Trump. Here’s what they said

After the violent attack on the U.S. Capitol last week, Democratic lawmakers who blamed President Donald Trump for inciting the insurrection pushed for a quick impeachment in the final days of presidency. But unlike the first time Trump was impeached, some Republican members joined the call.

“There has never been a greater betrayal by a President of the United States of his office and his oath to the Constitution,” Cheney wrote Tuesday in a statement.

A single article of impeachment was introduced and the House convened Wednesday to debate the charge of “incitement of insurrection.” The vote happened just hours later in a much more abbreviated procedure than the one that gripped the nation in 2019.

Not one Republican House member voted for Trump’s impeachment in December 2019. But his unproven claims of voter fraud in the 2020 presidential election and calls for his followers to descend on Congress while they counted Electoral Votes confirming President-elect Joe Biden as the winner of the November election led to a deadly insurrection in which five people died, including a Capitol police officer.

Trump’s rhetoric generated a wave of criticism from Democrats and Republicans, as well as the resignations of at least 10 members of his administration. A number of Republicans who did not vote for his impeachment still condemned his behavior on Jan. 6 and in the months since the election.

House Minority Leader Kevin McCarthy, R-Calif., called for the House to establish a “fact-finding commission” and consider a censure resolution against Trump rather than impeachment.

“I believe impeaching the president in such a short time frame would be a mistake,” McCarthy said on the House floor. “No investigations have been completed. No hearings have been held. What’s more, the Senate has confirmed that no trial will begin until after President-elect Biden is sworn in.”

McCarthy added that the president “bears responsibility” for the mob’s attack on the Capitol.

“He should have immediately denounced the mob when he saw what was unfolding,” he said. “These facts require immediate action by President Trump, accept his share of responsibility, quell the brewing unrest and ensure President-elect Biden is able to successfully begin his term.”

But Rep. Jim Jordan, R-Ohio, one of Trump’s most ardent supporters during the president’s first impeachment proceedings, denounced the impeachment proceedings. During the hearing Wednesday, he accused Democrats of promoting “cancel culture” and criticized their earlier attempts to investigate and impeach Trump early in his presidency.

“It’s always been about getting the president, no matter what,” Jordan said. “It’s an obsession, an obsession that has now broadened. It’s not just about impeachment anymore, it’s about canceling, as I’ve said, canceling the president and anyone that disagrees with them.”

Democrats, who have a slim majority in the House, had the numbers to impeach the president without Republican support, but now the article of impeachment will be delivered to the Senate, where a two-thirds majority is required to convict. Democrats won the narrowest possible majority in the Senate after two runoff races in Georgia last week, and will need at least 17 Republican senators to join them if Trump is to be convicted. None have yet publicly said they will vote to convict.

Here are the House Republicans who voted to impeach Trump:

In a statement Tuesday, Cheney of Wyoming’s at-large Congressional district noted that details of last week’s attack remain unclear, “but what we know now is enough.”

READ MORE: How was a violent mob able to breach the U.S. Capitol? Activists see double standard in police response

“The President of the United States summoned this mob, assembled the mob, and lit the flame of this attack,” Cheney wrote. “Everything that followed was his doing. None of this would have happened without the President. The President could have immediately and forcefully intervened to stop the violence. He did not.”

Cheney is the highest-ranking House member to vote for Trump’s impeachment.

As House members cast their votes on the articles of impeachment, Rep. Anthony Gonzalez from Ohio’s 16th Congressional District, tweeted a statement asserting that Trump “helped organize and incite a mob that attacked the United States Congress in an attempt to prevent us from completing our solemn duties as prescribed by the Congress.”

“When I consider the full scope of events leading up to January 6th including the president’s lack of response as the United States Capitol was under attack, I am compelled to support impeachment,” he wrote.

Rep. Jaime Herrera Beutler of Washington’s 3rd Congressional District criticized both the president’s rhetoric, which she said incited the mob that attacked the Capitol on Jan. 6, as well as his actions during the violence.

“Hours went by before the president did anything meaningful to stop the attack. Instead, he and his lawyer were busy making calls to senators who were still in lockdown, seeking their support to further delay the Electoral College certification,” she claimed.

Herrera Beutler also cited Trump’s speech in response to the attack, during which he told his supporters “you are very special” and “we love you,” while also asking them for peace.

“To impeach a sitting president is a decision I do not take lightly,” Rep. John Katko of New York’s 24th Congressional District said in a statement Tuesday.

READ MORE: How the attack on the U.S. Capitol unfolded

“As a former federal prosecutor, I approach the question of impeachment by reviewing the facts at hand,” he said. “To allow the President of the United States to incite this attack without consequence is a direct threat to the future of our democracy. For that reason, I cannot sit by without taking action. I will vote to impeach this President.”

Trump used his office to attack the legislative branch of government, Rep. Adam Kinzinger of Illinois’ 16th Congressional District said in a statement Tuesday, causing violence and destruction to “our nation’s symbol of democracy.”

“There is no doubt in my mind that the President of the United States broke his oath of office and incited this insurrection,” Kinzinger wrote. “If these actions … are not worthy of impeachment, then what is an impeachable offense?” 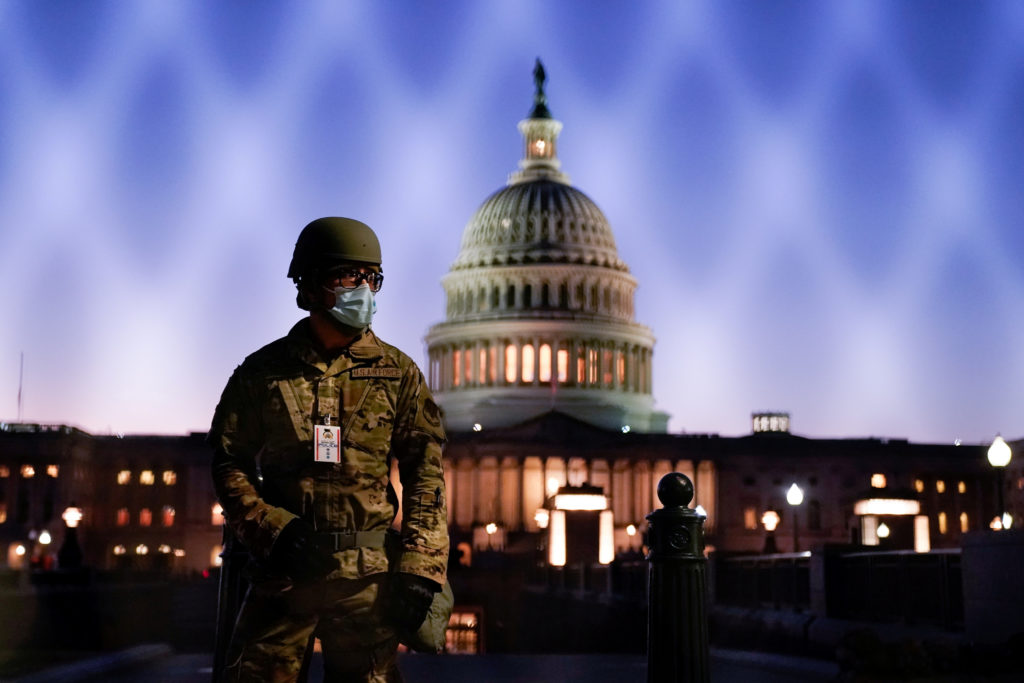 FILE PHOTO: Members of the National Guard gather at the U.S. Capitol as the House of Representatives prepares to begin the voting process on a resolution demanding U.S. Vice President Pence and the cabinet remove President Trump from office, in Washington, U.S., January 12, 2021. REUTERS/Erin Scott TPX IMAGES OF THE DAY/File Photo

Rep. Peter Meijer of Michigan’s 3rd Congressional District criticized the president in a statement Wednesday before the vote, noting Trump’s efforts to change the presidential election results, and calls for supporters to “fight” ahead of the Capitol attack.

PODCAST: What we saw the day the Capitol was attacked

“The one man who could have restored order, prevented the deaths of five Americans, including a Capitol Police officer, and avoided the desecration of our Capitol shrank from leadership when our country needed it most.”

Rep. Dan Newhouse of Washington’s 4th Congressional District on Wednesday voted to impeach Trump shortly after announcing his decision to do so on the House floor.

“These articles of impeachment are flawed, but I will not use process as an excuse for President Trump’s actions,” Newhouse said.

“The president took an oath to defend the Constitution against all enemies, foreign and domestic. Last week there was a domestic threat at the door of the Capitol and he did nothing to stop it.”

In a separate statement released the same day, Newhouse said Trump “did not strongly condemn the attack nor did he call in reinforcements when our officers were overwhelmed. Our country needed a leader, and President Trump failed to fulfill his oath of office.”

Rep. Tom Rice, representing South Carolina’s 7th Congressional District, voted to impeach Trump, though he had not spoken out publicly about his decision prior to the vote.

In a statement after the vote Wednesday, Rice said he was not sure whether Trump’s speech before the mob’s attack amounted to incitement of a riot, “but any reasonable person could see the potential for violence.”

“I have backed this President through thick and thin for four years. I campaigned for him and voted for him twice. But, this utter failure is inexcusable.”

Rep. Fred Upton of Michigan’s 6th Congressional District said in a statement Tuesday that he would have preferred a bipartisan formal censure of Trump rather than impeachment, but feared such a process would have interfere with other legislative priorities.

“Enough is enough. The Congress must hold President Trump to account and send a clear message that our country cannot and will not tolerate any effort by any President to impede the peaceful transfer of power from one President to the next. Thus, I will vote to impeach,” he said.

Rep. David Valadao, representing California’s 21st District, did not make a public statement prior to Wednesday’s House hearing about supporting impeachment, but did vote for the measure.

“Based on the facts before me, I have to go with my gut and vote my conscience. I voted to impeach President Trump,” said in a tweet after the House vote. “His inciting rhetoric was un-American, abhorrent, and absolutely an impeachable offense. It’s time to put country over politics.”

Left: U.S. President Donald Trump gestures as he speaks during a rally to contest the certification of the 2020 U.S. presidential election results by the U.S. Congress, in Washington, U.S, January 6, 2021. REUTERS/Jim Bourg