But Biden’s messaging to Black voters isn’t new, Dyer said, and it’s not enough. “I’ve been around long enough to know what the talking points are.”

“What we’re asking is, ‘When is our vote really going to translate into real, tangible solutions?’” he said.

Biden’s path to victory runs through battleground states like Wisconsin where Black voters in Milwaukee and other metropolitan areas will play a pivotal role in deciding the outcome of the presidential election.

But in the final stretch of the race, many Black voters in Milwaukee said they felt pressure to turn out in large numbers to help the Democratic Party win the White House, and as if their support was being taken for granted, even after months of nationwide protests over racial injustice during a pandemic that has disproportionately impacted people of color.

In the Black community in Milwaukee, most people are “voting anti-Trump,” said Marvin Pratt, who served as acting mayor of the city in 2004 and was the first Black person to hold the post. “Are they jumping up and down for Joe Biden? Not necessarily.”

‘Are they jumping up and down for Joe Biden? Not necessarily.’

The Biden campaign has spent months trying to energize Black voters across the country. The
Democratic nominee released the “Biden Plan for Black America,” a detailed agenda that would invest in “minority-owned” businesses, strengthen voting rights protections, and reduce racial disparities in health care, among other policies.

He’s also shown up — avoiding one of the strategic errors that helped sink Hillary Clinton in the final weeks of the 2016 election. Clinton overlooked Michigan and Wisconsin — a state she did not visit in the final 100 days of the race — and lost those states and Pennsylvania, in part because of a decline in Black voter turnout.

Some 1.6 million Black voters who backed President Barack Obama in 2012 did not vote four years later. In Wisconsin alone, Black voter turnout in 2016 was down roughly 19 percent from the previous presidential election. Voting rights advocates blamed strict voter ID laws that blocked between 17,000 and 23,000 voters from casting ballots. Trump won the state by 22,748 votes. 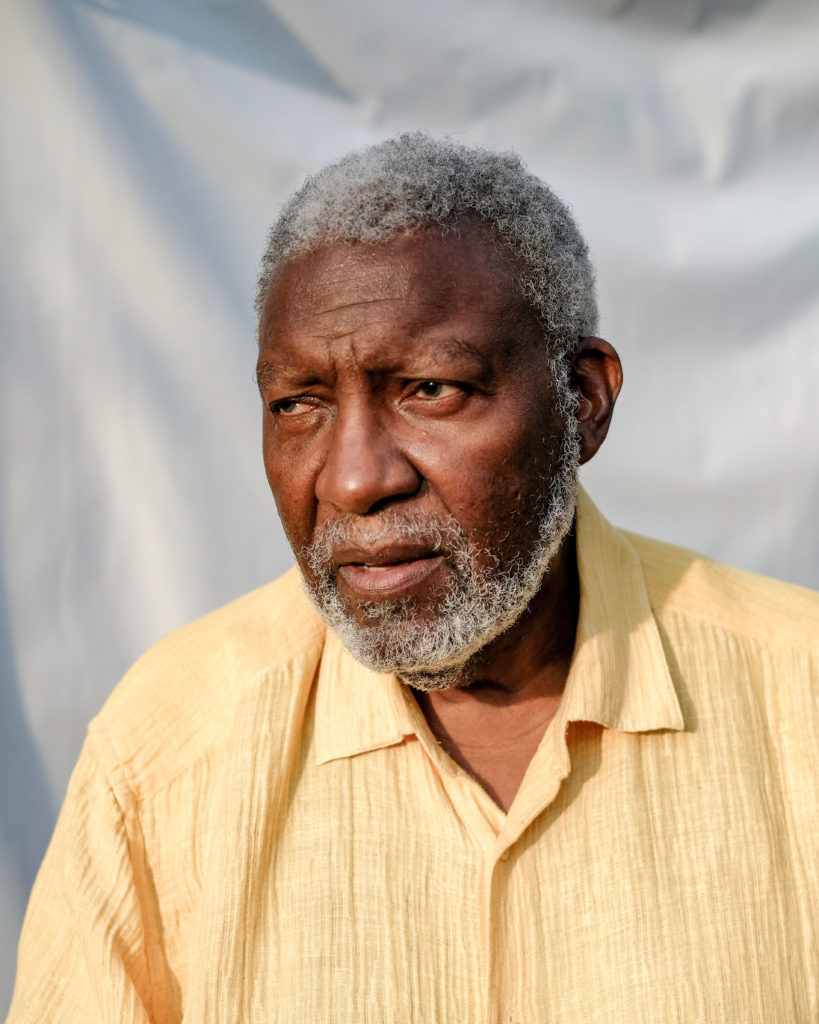 Marvin Pratt, a former acting mayor of Milwaukee, said many Democratic voters in the city are “voting anti-Trump.” Photo by Alex Wroblewski for the PBS Newshour

This year, Biden and his running mate, Sen. Kamala Harris, have prioritized battleground states and have campaigned in Wisconsin several times, as have Trump and Vice President Mike Pence. Biden visited Kenosha, Wisconsin, last month to meet with the parents of Jacob Blake, a Black man who was shot by a white police officer in late August. The shooting sparked protests that temporarily placed Wisconsin at the center of the national debate over race and policing.

With days left before voting ends on Nov. 3, the president is trailing Biden in Wisconsin by 7.8 percentage points, according to an average of recent polls compiled by RealClear Politics.

But Biden has struggled to shake criticism from the political left and right that his outreach is an election-year tactic to win support from a key part of his coalition, rather than a genuine effort to engage with Black voters.

“What we’ve seen this year is [the Biden campaign] kind of saying what they think people want to hear instead of digging into the issues,” said Malaina Moore, a recent graduate of Marquette University who grew up in Milwaukee.

Part of the frustration, especially among younger Black voters, stems from Biden’s response to the protests over the deaths of George Floyd, Breonna Taylor and other Black Americans killed by police.

Biden called for criminal justice reforms, and criticized Trump for refusing to say that systemic racism exists in America, including in the way people of color are treated by the police.

But he angered progressive activists leading the Black Lives Matter protests by saying he did not support defunding police departments. Biden’s moderate stance put him at odds with a wing of the Democratic Party that has shifted left on law enforcement since his days in the Senate.

Biden’s work on the 1994 crime bill, which was signed into law by President Bill Clinton and led to a spike in mass incarceration in the United States, remains a personal affront to many Black residents of Milwaukee who have witnessed the effects of the legislation firsthand. 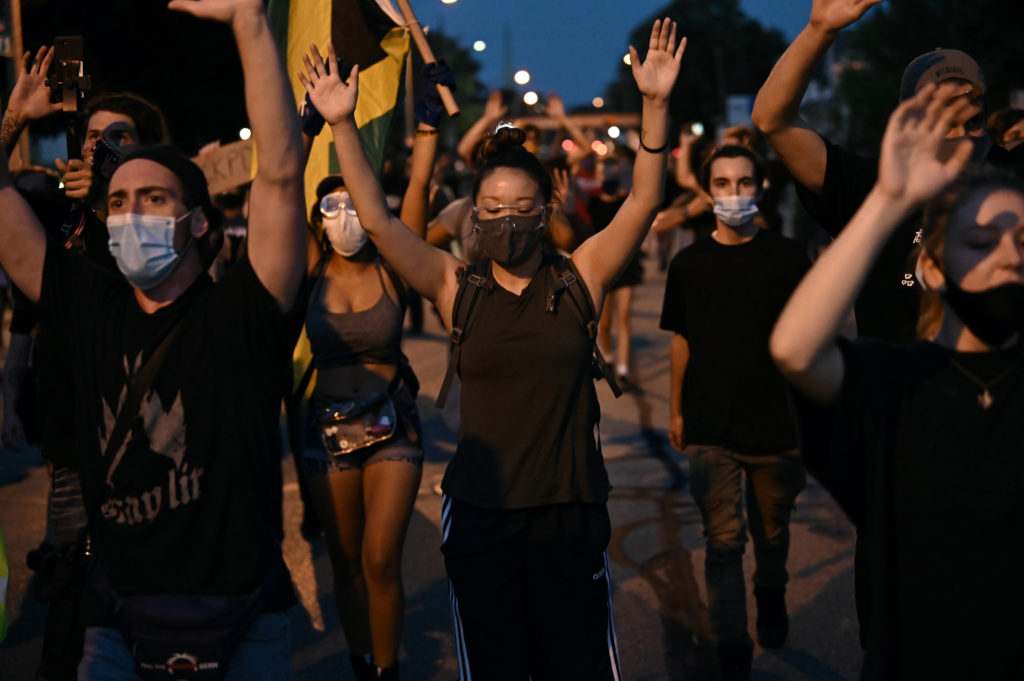 Demonstrators take part in a protest following the police shooting of Jacob Blake, a Black man, in Kenosha, Wisconsin on August 26, 2020. Photo by REUTERS/Stephen Maturen

One part of the city, the predominantly Black and low-income 53206 zip code on Milwaukee’s north side, is frequently referred to as the “most incarcerated zip code” in America for its high rate of crime and number of residents who have been in jail.

Voters “who are ‘woke’ know that Joe Biden was down with the Clinton crime bill,” said Rob Baker, a political consultant from Milwaukee and former head of the League of Young Voters Education Fund.

“That resentment is real,” Milwaukee County Executive David Crowley said. Crowley, who grew up in the 53206 zip code, won the post in April, becoming the first Black person elected to the office. He said many Black residents of the city have “given up on the [political] system because the system has yet to ever admit what it’s done to us historically.”

Dyer, the community activist, said living with a daily fear of violence breeds skepticism that any politician can bring about meaningful change. Burleigh Street, a dangerous stretch of the 53206 zip code known to locals as “the zoo,” has not gotten safer or seen significant investment under the last four presidents, he said.

Trump has seized on this frustration over a lack of progress, arguing that Black voters have “nothing to lose” by ditching the Democratic Party and voting for him. He frequently takes credit for the First Step Act, the criminal justice reform bill Congress passed and he signed in 2018. He also argues often that the unemployment rate for Black Americans and other people of color was the lowest on record before the coronavirus pandemic hit the U.S., though economists dispute the claim.

At the second and final presidential debate last week, Trump repeated his boast that he had done more for Black people than any president in history, with the “possible exception” of Abraham Lincoln. 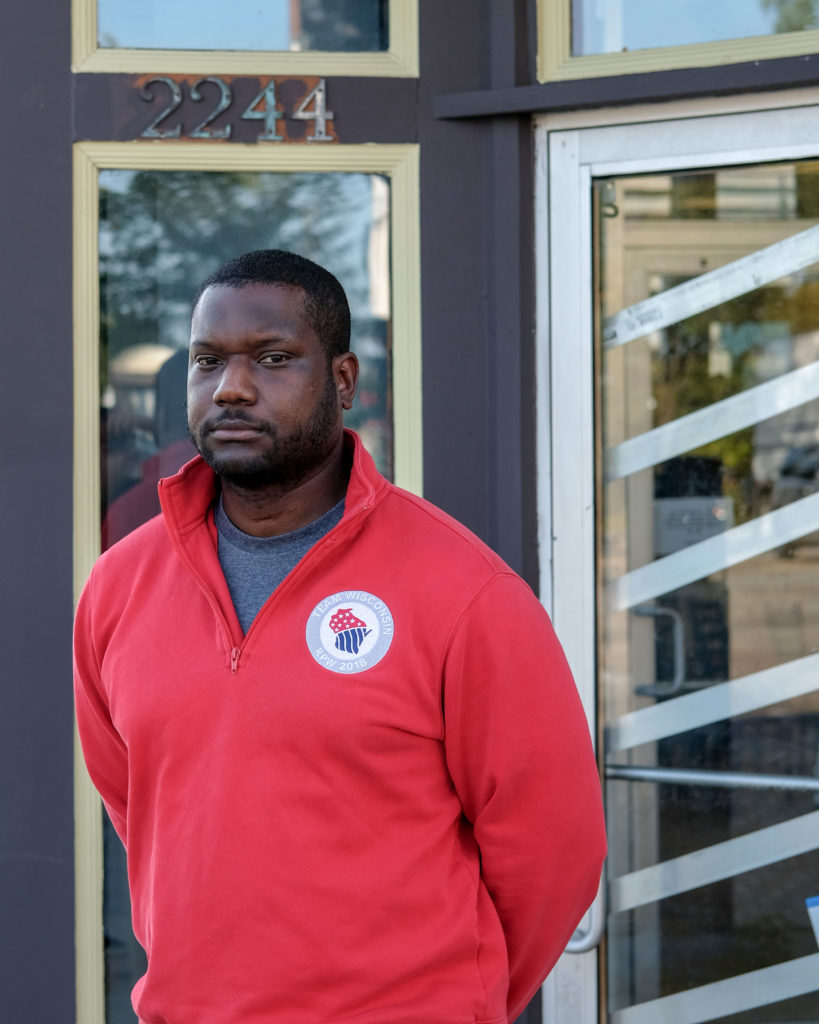 Khenzer Senat, a state GOP official in Wisconsin, said the party has stepped up its efforts to win over Black voters in Milwaukee ahead of Election Day. Photo by Alex Wroblewski for the PBS Newshour

Republicans in Wisconsin have echoed Trump’s message in courting Black voters in the state.

“The strategy here is [to argue] that Democratic policies have failed,” said Khenzer Senat, the African American outreach director for the Wisconsin Republican Party. “Here in Milwaukee, you’ve had a Democratic-controlled city for around 60 years and nothing has changed.”

The state GOP has worked alongside the Trump campaign to drive up support among Black voters in Milwaukee with radio ads, digital advertising and teams of volunteers knocking on doors, Senat said.

“Obviously we’re in a Democrat-run area so the majority of voters will vote for Joe Biden,” he said. But if “we get 12 to 14 percent of the Black vote in Wisconsin, President Trump wins Wisconsin. I believe that’s attainable.”

Black voters in Milwaukee predicted that as a group they would vote overwhelmingly for Biden, despite their reservations. But some said it shouldn’t fall on their shoulders alone to get Biden over the finish line in Wisconsin.

After a summer of protests that drew tens of thousands of white people to the streets, Pratt, the former mayor of Milwaukee, said white voters need to back up their activism at the ballot box.

“We’re going to see if the action of the protests is going to carry over to their vote,” he said. “I cannot see how you can be out there talking about systemic racism, and then go in and scratch Donald Trump’s name.”

Left: Joe Biden’s path to victory runs through battleground states like Wisconsin where Black voters in Milwaukee will play a pivotal role. But some, like Rob Baker, said they remained frustrated with Biden's record on law enforcement issues. Photo by Alex Wroblewski for the PBS Newshour