How more Black candidates could win in white districts this year

When Cameron Webb decided to run for Congress as a Black Democrat in a district that voted for Trump in 2016, he saw himself as a consensus builder.

But this spring, as the 37-year-old doctor campaigned in a heated primary for Virginia’s 5th Congressional District, he faced a question about whether his skin color was a political liability.

Webb is one of twelve Black candidates in largely white districts who are either leading or running in close races with their opponents, according to the Cook Political Report.

Webb’s district, first represented by James Madison and home to Charlottesville and Thomas Jefferson, is among the oldest in the country.

“I said, ‘Don’t let your fear of other people’s racism become your racism.’”

“There’s a lot of history here and that’s a source of pride for people,” Webb said. “But at the same time, when I announced my candidacy, it wasn’t lost on me that since 1789, every single representative of this district has been a white man.”

He recalled breaking the awkwardness by telling the supporter who asked about his race that, yes, white people like him too. And then he addressed discrimination, real and perceived.

“I said, ‘Don’t let your fear of other people’s racism become your racism.’”

The impending election has the potential to bring about a tectonic shift of power in America if more Black leaders are elected to represent areas dominated by white voters.

Six of them are seeking seats in the U.S. Senate, where only 10 Black Americans have ever served.

The growing number of Black candidates in majority white areas looks like neither an accident nor a fluke to political scientists who have been watching the past few decades.

“The suburbs opened up to minorities,” said Katherine Tate, professor of political science at Brown University and author of “Black Faces in the Mirror: African Americans and Their Representatives in the U.S. Congress.”

More than a third of suburban residents are now non-white, according to a Brookings Institution analysis of Census data. A majority of Black people in America now live in the suburbs.

“Whites see Blacks as supervisors and neighbors,” Tate continued. “So this expansion in Black presence in society and integration has caught up to whites and they are less prejudiced against Black candidates when they run. I think that’s new.”

Experts point back to the 2018 midterms, when eight of the nine new Black candidates elected to Congress won in largely white districts.

“What we saw happen in 2018 was a real departure,” said David Lublin, professor and chair of the Department of Government at American University’s School of Public Affairs. “Most of these districts were not just majority non-Black, they were heavily majority non-Black.”

READ MORE: How the AP calls races and what to expect on election night

One of those winning 2018 candidates was Rep. Lucy McBath, D-Ga., whose teenage son Jordan Davis was shot and killed in 2012 by a white man at a gas station in Jacksonville, Florida. In 2018, McBath won in Georgia’s 6th Congressional District which is more than 70 percent white.

Black people are often moderate. So are the suburbs.

Black candidates and their messages are increasingly aligning with changing dynamics in the fastest growing battlegrounds — the suburbs.

“Blacks elected in majority white districts are moderates,” Tate said. She points out that Black voters in general are more moderate than they are liberal.

Critical suburban voters also occupy the political middle ground. Pew found in 2018 that suburban voters are more moderate than urban and rural voters on a host of issues, from abortion to immigration to the role of government. 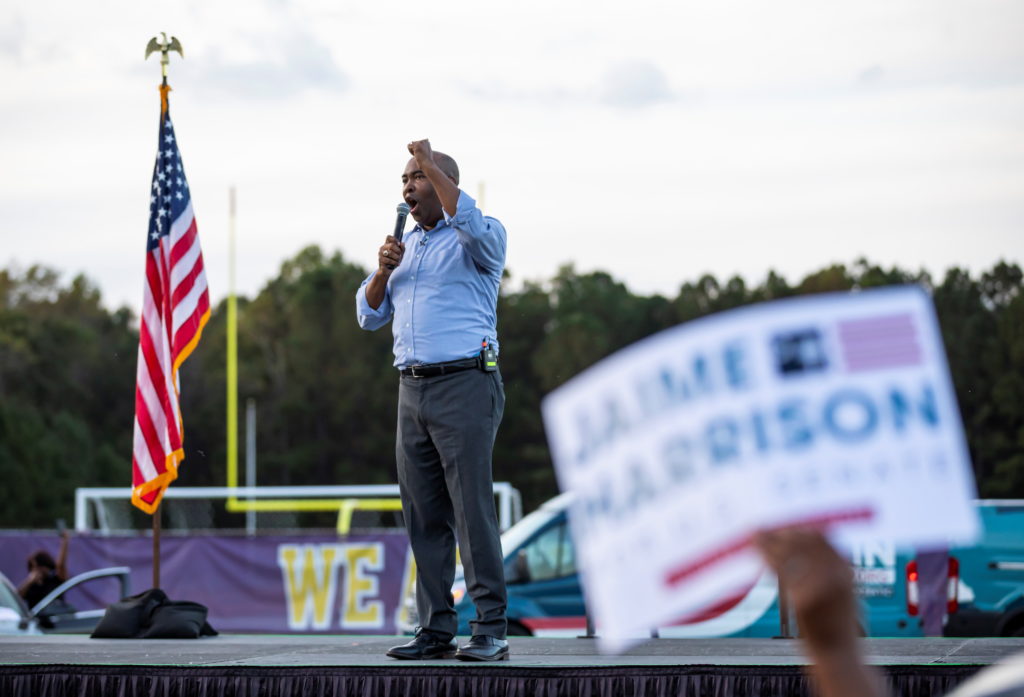 Talking about race is no longer “radical”

There has also been a shift in the way some people — white people, specifically — view the discussion of race itself.

“Over the last 10 years there has been kind of a change in context where white voters are much more supportive of racial equality,” said Christopher Stout, political science professor at Oregon State University. “That’s particularly true this year in large part because of the Black Lives Matter movement.”

The BLM movement and nationwide protests have pushed race to the political fore this election cycle.

In Mississippi, Democratic U.S. Senate candidate Mike Espy’s first television ad spoke of segregation and “how much Mississippi has changed.” This month in Georgia, Raphael Warnock, another Democrat running for U.S. Senate, posted a short video addressing the recent violence against Black men, concluding, “racism is deadly.” And in Louisiana, Democratic U.S. Senate candidate Adrian Perkins has directly called racism, “one of the heaviest issues in our community.”

Stout argues that talking about race is important for Black candidates, who have faced a higher level of scrutiny in the past, as well as pressure to avoid the topic so as not to alienate white voters.

At the same time that Black candidates are speaking about racial issues in a more direct way than some of their predecessors, white Americans have quickly become more sympathetic to charges of racial injustice, including in policing.

PODCAST: Why voter suppression continues and how the pandemic has made it worse

In 2015, 19 percent of white American adults believed that police violence against the public was an “extremely” or “very serious” problem, according to an Associated Press-NORC Center for Public Affairs Research poll. In 2020, that number had more than doubled, to 39 percent of white adults.

Pat Timmons-Goodson, a Democratic congressional candidate who was the first Black woman to serve on the North Carolina Supreme Court, feels no constraints in talking about issues affecting her community.

In February, Texas Republican Wesley Hunt released an attention-getting congressional campaign ad called “Chains,” in which he held a pair of metal shackles, spoke about his great great grandfather’s life as a slave and his family’s success story now.

A former Army Apache helicopter pilot, Hunt is an unapologetic conservative who says it is good for his party to more openly discuss race in America.

“The idea of not talking about [discrimination] makes the party look so insensitive,” he said. “Why do people feel oppressed? You still have to acknowledge that.”

Hunt is one of a small but growing number of Black Republicans working to get into Congress and join the only Black Republican returning there, South Carolina Sen. Tim Scott.

Along with Hunt, two others are in highly competitive races: John James, an Army veteran running for U.S. Senate in Michigan, and Burgess Owens, a former professional football player running in Utah’s 4thCongressional District.

READ MORE: In a year of uncertainty, voters’ fears of not being counted prompt record early turnout

Hunt thinks the growing number of Black congressional candidates is important on the right.

“I am a proponent of promoting Black excellence, no matter what it is,” Hunt said. “I like the idea … that we have a lot of diverse Black candidates on both sides of the aisle.

Nowhere is the shift more statistically significant, nor as potentially impactful, as in the U.S. Senate.

Of the 1,984 people who have served in the Senate since its formation, just 10 of them have been Black. Of the 10, two were appointed, not ever elected.

This year alone Black candidates for Senate have the potential to increase that total number by 60 percent. Six potentially new Black senators are running, including three in close races in South Carolina, Georgia and Michigan. The remaining three are Democrats running in deep red southern states — Mississippi, Tennessee and Louisiana — where the political odds are against them.

Some see their candidacies as signs of success, even before the ballots are counted.

“What’s really great about that is it gives this opportunity to demonstrate that Black candidates can run viable races statewide,” said Jenny Garcia, professor of Politics and Comparative American Studies at Oberlin College.

In Tennessee, for example, environmental activist Marquita Bradshaw won an upset victory in the Democratic primary this year to become the first Black nominee for statewide office in Tennessee history.

“Those are things that just kind of run counter to a lot of what we would traditionally expect,” Garcia said.

When a candidate of color wins, researchers have found it directly affects how other individuals of color see themselves and how their communities get resources.

“They feel like, you know, ‘the government actually cares what I have to say,’” Garcia said. “The legitimacy of government changes.”

But what does it mean if these candidates lose?

“Hopefully what races like these do is — they, first of all, get people excited about it and they get people actually thinking it’s a possibility,” Garcia said.

For Webb, the U.S. House candidate in Virginia, it is also about a new conversation.

“People really are weighing, ‘what would it be like to have someone [in Congress] who is not of that same demographic that we’ve always seen?’”