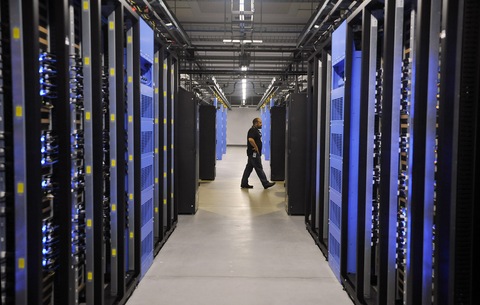 An employee walks past servers in one of four server rooms at the Facebook Data Center in Forest City, N.C. Photo by Rainier Ehrhardt/Getty Images.

Technology companies can be a powerful force in Washington.

As domestic spying remains in the headlines, Google, Facebook, Microsoft, Yahoo and Twitter are urging the government to lift the veil of secrecy from its surveillance programs. The tech giants want to convince anxious consumers that they’re concerned about their users’ privacy.

Craig Timberg and Cecilia Kang write on the Washington Post front page that the tech giants “have struggled to stanch the damage to their reputations.”

The requests for transparency came in waves Tuesday, as Google went public with a letter to Attorney General Eric Holder asking for the ability to detail the numbers and scope of the national security data the courts mandate they hand over. Yahoo issued a statement saying it recognizes the “importance of privacy and security” but also believes “that transparency . . . will help build public trust.”

Politico’s Alex Byers & Michelle Quinn write that the calls for transparency help save face, but also “kicks things up a notch in the public relations game, where consumer confidence will be crucial for Internet companies going forward.”

“The Valley is absolutely absorbed by this story,” said Paul Saffo, a longtime Silicon Valley technology forecaster. “It’s the perfect confluence of tech geeks, privacy hawks and Libertarians. The discussion is to put it bluntly, ‘Is Google evil?’ The consensus so far is that no they aren’t, and Google and Facebook and the others will not get swept up in this.”

Politico also reported that Mozilla and civil liberties groups launched StopWatching.us, “which they describe as a campaign to call on citizens to demand a ‘full accounting of the extent to which our online data, communications and interactions are monitored.'”

On the NewsHour Tuesday, Jeff Brown talked with Google’s chief legal officer David Drummond about the move. Watch here or below:

The NewsHour also looked at the latest on the Edward Snowden probe, and examined how government contractors can end up with so much access.

The issue will be front and center on Capitol Hill Wednesday as NSA Chief Gen. Keith Alexander testifies at a Senate Appropriations hearing on cybersecurity. Watch that here.

The Senate cleared its first hurdle on a sweeping immigration reform measure Tuesday, paving the way for a few weeks of debate and the possibility of sending a bill to the House.

The Washington Post broke down the vote and Erica Werner sums up the stakes nicely for the Associated Press:

Supporters expressed confidence they could muster the 60 votes needed for the bill to pass the Senate by July Fourth. Democrats control 54 Senate votes, and Republicans 46. But a number of opponents said success was far from assured. And supporters are hoping for closer to 70 votes on final passage to show resounding momentum for the bill and pressure the Republican-led House to act.

There’s not a clear indication Speaker John Boehner will allow a broad measure that includes a pathway to citizenship to reach a vote. As we noted Tuesday, the Ohio Republican says he wants to do something. But advocates for a comprehensive approach are starting to worry.

In a new development, the Club for Growth sent a letter to Republican members of Congress pointedly backing the so-called “Hastert Rule” to only allow floor votes on legislation that has support from the majority of the party. The move goes right at the issue plaguing Boehner ahead of the immigration debate.

“Recently House Republicans have passed bills that are inconsistent with its mandate from the American people,” a group of conservatives wrote in the letter. “Now you face issues such as gun control, immigration reform, tax increases, and a debt ceiling that threaten to divide Republicans and in so doing empower the liberal minority in the House.”

Meanwhile, the Senate forged ahead with debate.

[ DUE TO RIGHTS RESTRICTIONS, VIDEO IS NO LONGER AVAILABLE ]

And here are some other stories tracking the debate. David Brody looked at Sen. Marco Rubio’s efforts to keep evangelicals on board. Politico has the details of an amendment to protect same-sex couples, a measure most Republicans won’t support.

Anthony Weiner’s campaign announced he plans to live for one week on a budget of $1.50/meal.

Show off. MT @timkaine: Abt to deliver remarks in Spanish on the Sen floor to call for passage of immigration reform. Watch live on CSPAN 2

Rubio on Senate floor during immigration debate: “By the way, the Miami Heat won Game 2 in resounding fashion.”

Green got a flame thrower

That’s a wrap for today, #DC, but we’ll be back tomorrow with more #OMGFreeBenJerrys… see you then!