Update (May 30, 2015): Texas lawmakers approved open carry legislation Friday and sent it to Gov. Greg Abbott, who promised to sign it.

The law allows licensed Texans to carry handguns in plain view in belt or shoulder holsters.

In a concession to law enforcement groups, lawmakers removed a provision that would have prohibited police from stopping someone to check for a gun license simply because that person was carrying a handgun openly. Under the version passed Friday, officers will be allowed to do so.

In the lead up to Friday’s vote, police groups demanded that Gov. Abbott veto the bill if the provision wasn’t removed.

The legislature passed the law in a pair of votes largely divided along party lines. The Texas House of Representatives approved the legislation 102-43, with just five Democrats joining the Republican majority. The bill passed the state Senate with 20 Republican votes in favor and 11 Democratic votes against it.

In spite of its reputation for conservatism, Texas’ laws regarding the open carry of handguns have long been closer to those of blue states like California and Illinois.

But now, with the success of recent open carry bills in the Texas legislature, the Lone Star State is poised to become the 45th U.S. state to allow licensed citizens to carry handguns openly in public.

On Friday, the Texas House of Representatives voted 96-35 in favor of House Bill 910, which extends the rights of citizens who have a concealed handgun license to allow them to openly carry a holstered handgun. A similar bill passed the Texas Senate last month; the two versions must be reconciled before heading to Republican Gov. Greg Abbott for signing.

Abbot is likely to give the measure his approval. During a February press conference, he said, “I will sign whatever legislation reaches my desk that expands Second Amendment rights in Texas,”according to The Texas Tribune.

Currently, Texans who want to carry a handgun in public must have a concealed handgun license and are required to keep the gun hidden. State law allows residents 21 and older, as well as those on active military duty, to obtain a license after undergoing a background check, taking classes and passing written and hands-on tests.

Some form of open carry of handguns is allowed in 44 other states, though some require permits or licenses, and others restrict the times or places when open carry is allowed. If Texas legalizes open carry, only California, Florida, Illinois, New York, South Carolina and Washington, D.C. will still have outright bans. 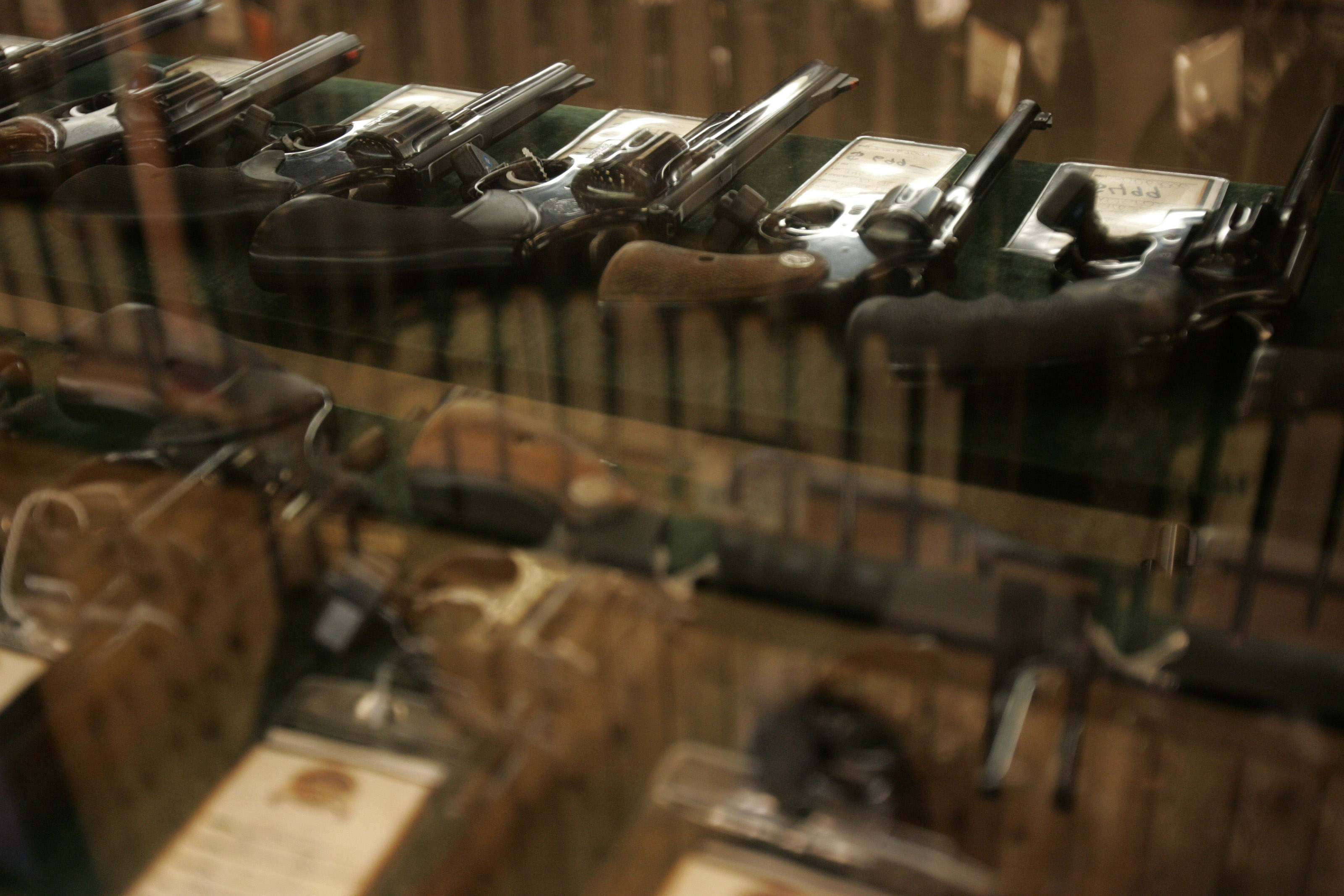 Guns on sale are stored in a case at a gun store in Fort Worth, Texas June 26, 2008. Texas is poised to legalize open carry of handguns for licensed residents. Photo by Jessica Rinaldi/Reuters

Texas already allows people to purchase and openly carry rifles and shotguns without permits, which has prompted gun-rights groups to carry assault weapons into stores and outside the Texas Capitol in order to bring attention to what they see as an arbitrary legal distinction.

Belying the state’s cowboy image, the percentage of Texas citizens who own a gun — 35.9 percent — is below the national median of roughly 40 percent. And Texas voters’ opinions are divided on open carry, with a minority in favor.

A joint University of Texas-Texas Tribune poll released in February showed that the majority of Texan voters — 77 percent — believe people should be able to carry handguns in public in some form. But only 32 percent support open carry, with another 45 percent in favor of allowing those with licenses to carry a concealed handgun, but not openly.

That a minority of Texans support open carries has prompted charges from some gun control advocates that that the State Legislature is being influenced by pro-gun interests.

Alexandra Chasse, a Texas member of Moms Demand Action for Gun Sense in America, told The Wall Street Journal that she feels legislators “are turning their back on the majority of Texans to cater to a narrow special-interest group.”

Among Texas police chiefs, opposition to open carry is slightly higher than in the voting public. A survey released by the Texas Police Chiefs Association shows that nearly 75 percent of the 192 chiefs surveyed answered no to the question “do you think there should be open carry in Texas?”

Not included in either of the recent open carry bills is another controversial topic — whether people with concealed handgun licenses should be allowed to carry their guns on public college campuses.

The Texas Senate approved one such “campus-carry” measure last month, and the state House of Representatives is expected to pass a companion bill.

Editor’s note: An earlier version of this story listed the number of states that currently allow some form of open carry as 45. The correct number is 44.