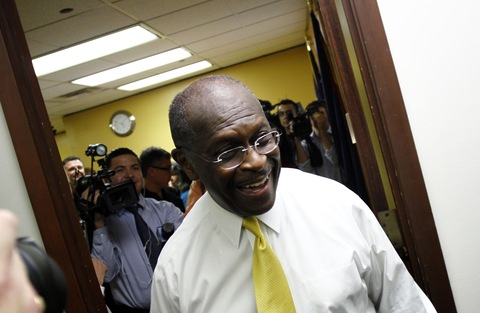 He is leading in the national polls.

He is running a close second to Mitt Romney in the critical early states of Iowa, New Hampshire, South Carolina and Florida.

His campaign claims it is now raising more than $1 million per week.

But Herman Cain can’t seem to cross the critical threshold with the Republican establishment, the press and, most importantly, the voters. Not many people seem to think Cain has a real shot at the nomination or the presidency. (And stories like this one in Thursday’s New York Times don’t help.)

The Washington Post’s Dan Balz attended a Cincinnati-area focus group conducted by Democratic pollster Peter Hart and found all the attraction to Cain — but also a total inability for voters to envision him as president.

> Confirming Gallup polls, Cain was viewed as the most likable of the candidates, a people person, a hard-working businessman, a potential problem-solver and someone who many said would be a good neighbor. “He’s Main Street,” said Becky Leighty, a Republican. “He’s not Wall Street, and he’s not a politician…”

[T]oward the end of the evening, Hart sat down at the table and braced the group with perhaps the most telling question of the night for Cain’s candidacy. “Here’s what I don’t get,” he began. He noted that Cain had been described as down to Earth and a good neighbor, but he also recalled how the group had described the country as being in terrible shape and noted that Cain is running a campaign with little staff or infrastructure.

Not a hand went up. Two people said they would want to know who Cain’s vice presidential running mate would be. Four said they would feel as comfortable with Cain as with Obama, but they were all Republicans eager to see an end to the Obama presidency.

It’s amazing how fast voters can begin to envision a candidate becoming president once the candidate actually starts winning some elections. To get to that point Cain has an extraordinary hurdle to jump. Outsider credentials with a heavy dose of likeable charm and wit is unlikely sufficient to win the nomination. Cain’s challenge is to capture voters’ imagination about his fitness for the Oval Office without losing all that affability and appeal that has fueled his rise.

The bipartisan “super committee” charged with agreeing to $1.2 trillion in deficit reduction over 10 years now has its first proposal: On Wednesday, all six Democrats on the congressional panel supported a measure that would cut $2.5-$3 trillion from the deficit.

Robert Pear and Jennifer Steinhauer of the New York Times spell out the details of why the proposal is likely going nowhere:

The committee is charged with cutting budget deficits by a total of at least $1.2 trillion over 10 years. The Democratic plan would trim much more, a total of $2.5 trillion to $3 trillion, through cuts in the growth of federal entitlement programs, including Medicare, and more than $1 trillion in new tax revenues.

The proposal, which came after weeks of silence, has virtually no chance of winning approval from Republicans on the committee, who have repeatedly said they would not accept a package that included tax increases.

A Republican Congressional aide said the Democrats’ proposal was not serious. “I do not know why anyone would believe that Republicans would ever agree to more than $1 trillion in taxes,” said the aide, speaking on condition of anonymity, in keeping with restrictions imposed by the co-chairmen of the panel. “It is ridiculous, nothing more than political posturing.”

This proposal is closer to what President Obama and House Speaker John Boehner, R-Ohio, were considering when they wanted to “go big” during the debt limit debate last summer, but they ultimately went with a piecemeal plan that included the creation of the super committee.

Reuters reports that Sen. Jon Kyl, R-Ariz., told Democrats during a closed-door meeting that their plan raised too much revenue.

“We haven’t signed off on any revenues, and we certainly aren’t doing anything that high,” the aide quoted Kyl as saying, Reuters reported.

Republicans weren’t the only ones unhappy with the proposal. Justin Ruben, executive director of MoveOn.org, said in a statement echoing Occupy Wall Street rhetoric, that the plan was too moderate:

“The Democrats on the Super Committee have a real opportunity to show the American people whose side they’re on by proposing a plan that would put middle class families first, and focus on making millionaires and Wall Street pay their fair share. Instead of starting out at the negotiating table with a proposal the vast majority of Americans support — they’re apparently offering a plan to make deep cuts to Medicare benefits. This sends exactly the wrong message to the American people. Democrats should be fighting tooth and nail to protect the 99%, not offering the Republicans policies that would continue to devastate the middle class.”

The developments don’t bode well for the success of the committee. If they fail to recommend a proposal by Nov. 23 that can pass Congress before Dec. 23, there will be automatic cuts to defense and domestic spending. And the real deadline could be much earlier. Congressional Budget Office Director Douglas Elmendorf told the committee it will take weeks for his office to evaluate any plan — meaning that Nov. 23 deadline is a lot closer to right about now.

It shouldn’t surprise any casual observer of the 2012 GOP nomination race that Texas Gov. Rick Perry and his campaign team are thinking of reducing his participation in upcoming debates.

The debates haven’t been kind to Perry, who shot out of the gate in August to the top of the field but has since plummeted in the polls in large part because of unflattering exposure in a series of high-profile debates.

Perry’s communications director, Ray Sullivan, said that Perry will participate in CNBC’s debate in Michigan on Nov. 9, but after that will start declining invitations and pick and choose targets to allow for more time for retail campaigning with voters.

Perry’s shift toward avoiding some debates might reflect his campaign strategy in Texas.

In large part, as a statewide candidate, Perry has appeared before favorable audiences. While the strategy may have helped him win in Texas, it may have left Perry unprepared to vigorously engage political opponents and deal with tough questions from reporters, newspaper editorial boards and citizens who disagreed with his ideas.

Asked whether that was the case, Sullivan said only there are too many debates, too little time.

“At some point there seems to be a law of diminishing returns both for viewers and candidates and we need to be spending time, particularly as the last entrant, with voters, doing town halls, retail politics and local media in Iowa, New Hampshire and the early states,” Sullivan said.

There are at least 12 planned debates from now through January, but the candidates have not yet announced in which of those debates they will participate.

WATCH: 5 questions about mental health during the pandemic answered by an expert