NewsHour Connect: The End of Collective Bargaining in Wisconsin

Wisconsin’s controversial new collective bargaining law takes effect on Wednesday. The law severely diminishes state employee’s collective bargaining rights and enacts what is essentially an 8 percent cut in pay for state workers. Salaries are not being directly cut, but workers will now be paying more for their health care out of their paychecks. 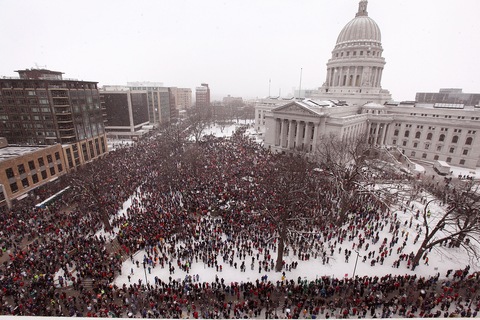 An estimated 70,000-100,000 demonstrators rally outside the capitol building protesting the proposed Budget Repair bill on February 26, 2011 in Madison, Wisconsin.

Republican Gov. Walker’s plan was met with opposition from tens of thousands of protesters who occupied the capitol in Madison for weeks in February. Walker claimed the law was necessary to combat a projected $3.6 billion budget shortfall. The proposal also prompted 12 Democratic state lawmakers to leave the state in an attempt to stall the vote.

The Republican-led assembly eventually passed the cuts to pay and bargaining rights on
March 10 after adjusting the bill to permit a vote with fewer members present.

On June 15, the Wisconsin Supreme Court upheld the law in a 4-3 decision after it had been challenged by a lower court on the grounds that the Wisconsin legislature had not given proper notice before passing it.

But for some, the fight is not yet over. The Wisconsin Education Association Council, the state’s largest teachers’ union, representing nearly 100,000 educators, has filed a lawsuit alleging that the law violates the Constitution.

Micki Maynard, a reporter with Changing Gears, has been covering labor issues in the Midwest for years and has followed the legal battles in Wisconsin. She spoke with Hari Sreenivasan on Wednesday.

Read the Wisconsin Assembly Bill 11, which takes effect on Wednesday:

Section 183 highlights the changes to the collective bargaining rights for state employees.