The Politics of the Killing of Bin Laden 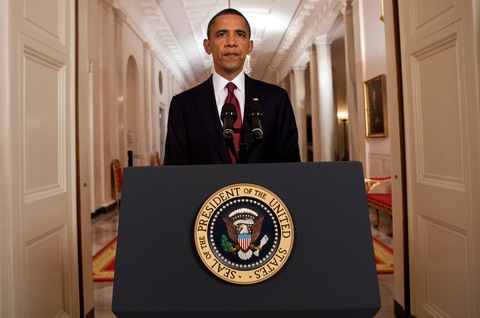 In an address from the White House, President Obama said that Osama bin Laden has been killed. Photo by Brendan Smialowski/Bloomberg.

It will take days, if not a few weeks, for the full political impact of President Obama’s announcement that Osama bin Laden has been killed to take hold.

However, there are a few political ramifications to the president’s dramatic announcement Sunday night from the East Room that have become instantly clear.

“The death of bin Laden marks the most significant achievement to date in our nation’s effort to defeat al Qaeda,” President Obama said in his speech to the nation.

“Yet his death does not mark the end of our effort. There’s no doubt that al Qaeda will continue to pursue attacks against us. We must — and we will — remain vigilant at home and abroad,” he added.

In those words, President Obama, at least temporarily, eviscerated one of the main lines of criticism from many of the Republicans seeking to defeat him in 2012.

For the last several months, the Republican leadership on the Hill and the 2012 presidential hopefuls have characterized every criticism of the president, from the conflict in Libya to high gas prices at the pump, as a “failure of leadership.”

Few things look more presidential than delivering news to the world that your military has successfully hunted down and killed the nation’s most high profile enemy after he had eluded the United States’ grasp for nearly 10 years.

With the country witnessing a big commander-in-chief moment and learning of the dramatic details of the operation ordered by President Obama, it may sound somewhat tone deaf for each answer at the upcoming inaugural 2012 Republican presidential debate to be framed around the idea of President Obama as a failed leader.

In fact, both Mitt Romney and Tim Pawlenty took time to praise President Obama by name in their statements reacting to the news Sunday night.

“This is a great victory for lovers of freedom and justice everywhere. Congratulations to our intelligence community, our military and the president,” said Romney.

Said Pawlenty: “I want to congratulate America’s armed forces and President Obama for a job well done. Let history show that the perseverance of the U.S. military and the American people never wavered.”

The gap in stature between the 2012 candidate who sits in the Oval Office and those seeking to replace him who do not will be on full display this week in a way that will likely play to President Obama’s advantage.

Other than the optics of leadership, the killing of bin Laden might have a role to play in the inevitable upcoming debate in Washington about the withdrawal of U.S. troops from Afghanistan.

President Obama and his team remain publicly committed to begin a significant reduction of troops this summer following the surge he ordered in December 2009.

It’s unclear, however, if the security situation on the ground in Afghanistan will match the president’s political timetable for withdrawal.

It is possible, perhaps, that holding up the metaphorical scalp of Public Enemy No. 1 will help the president sell his plan to start bringing home some U.S. forces from a war that’s soon approaching its 10-year anniversary.

Not only did he promise to kill bin Laden in a 2008 presidential debate, but in August 2007 President Obama put forth a foreign policy vision that included going into Pakistan to kill terrorist targets with or without the permission of the Pakistani government.

In this case, the president said the cooperation of the Pakistani government helped lead the United States to this moment, but considering how much heat he received from Republicans and fellow Democrats for his remarks at the time, it must feel like a particularly sweet moment for the president to see that vision fulfilled.

We’re sure to see a new round of polls in the next week or so that will be hyper-analyzed for any bounce in the president’s favor in the wake of bin Laden’s death. However, the 2012 election is still very likely to be driven more by the health of the U.S. economy and whether or not Americans feel better days are ahead than by the killing of bin Laden.

But, for now, the president gets to bask in the spotlight of a major success.

The most noteworthy event of the week in Republican presidential politics — the first scheduled debate in Greenville, S.C., this Thursday — has some big question marks surrounding it.

Chief among them is: Who will show up?

Pawlenty released a statement Friday seeking to ramp up the pressure on his competitors to join the debate. “It’s time for Republicans to show leadership and engage in the battle of ideas,” he said.

The Wall Street Journal’s Neil King Jr. reports over the weekend that the requirements laid out by the South Carolina GOP, who is partnering with Fox News to sponsor the debate, could be to blame for the no-shows.

“The party has imposed three hurdles to joining the debate. First, a candidate must have filed the paperwork for a federal exploratory committee, a qualification only five or so mainstream candidates meet. A candidate must garner at least 1% support in five national polls, which would nix a few of those already partially in the ring. And finally, a candidate must pay the state party $25,000 to register to be on the ballot in South Carolina.”

Beyond the debate, there are a smattering of other GOP-related goings-on to keep an eye on this week.

Indiana Gov. Mitch Daniels will deliver a speech on education reform at the American Enterprise Institute in Washington on Wednesday.

Over the weekend, Gov. Daniels told the Indianapolis Star he would decide “within weeks” whether to run for president.

Former Utah Gov. Jon Huntsman, who just stepped down as U.S. Ambassador to China, will deliver the commencement address at the University of South Carolina on Saturday.

It will be Huntsman’s first trip to an early nominating state since returning from China this past weekend. Huntsman supporters had been laying the groundwork for a potential bid while Huntsman was overseas.

South Carolina Republicans will also hold their state convention in Columbia on Saturday, which could draw some potential candidates, including those who end up skipping Thursday’s debate.