The legacy of Paul Ryan

When his predecessor, John Boehner, stepped down as the speaker of the House in 2015, Paul Ryan did not want the job.

But Boehner’s departure set off a chaotic leadership fight, and after House Majority Leader Kevin McCarthy, R-Calif., failed to secure enough support for the post, Ryan bowed to pressure from his GOP colleagues to step in and fill the power vacuum.

“I never thought I’d be speaker,” Ryan said in a speech on the House floor on Oct. 29, 2015, the day he took over the gavel from Boehner. But now that he had the job, Ryan said, he planned to pursue an ambitious legislative agenda: tax and health care reform, strengthening the military, reducing the nation’s debt. “The cynics will scoff and say it’s not possible. But you better believe we are going to try,” Ryan said at the time.

On Wednesday, in a brief press conference announcing his plan to step down as speaker and retire from Congress when his term is up in January, Ryan argued that he made good on his promise by accomplishing many of his top objectives during his two-and-a-half year run as speaker.

Those are “lasting victories that will make this country more prosperous and more secure for decades to come,” Ryan said.

Ryan’s announcement Wednesday morning ended months of speculation that he might step down. But it reignited the debate over his 20-year political career and legacy, which includes serving as the Republican Party’s vice-presidential nominee in 2012, along with his complex relationship with President Donald Trump.

Ryan’s announcement ended months of speculation that he might step down.

Ryan frequently criticized Trump during the 2016 presidential election. He said Trump’s attacks on a Mexican-American federal judge were the “textbook definition” of racism. He also told House Republicans he would no longer defend Trump a month before the 2016 election, after the release of a 2005 Access Hollywood tape in which Trump is heard boasting about grabbing women’s genitals.

But Ryan has worked closely with Trump on taxes and other issues since he took office, though the House speaker has at times distanced himself from some of the president’s more controversial comments and policies. Trump praised Ryan in a tweet sent out after his announcement Wednesday.

“Speaker Paul Ryan is a truly good man, and while he will not be seeking re-election, he will leave a legacy of achievement that nobody can question. We are with you Paul!” Trump tweeted.

“This job chose him, he didn’t necessarily chose it,” Rep. Ann Wagner, R-Mo., said in a brief interview. “He’s brought some cohesiveness back to our conference, he’s raised a lot of money, he passed the tax reform bill.”

Ryan, 48, rose quickly through House GOP ranks after his election to Congress in 1998. The Janesville, Wisconsin, native served as chairman of the budget Committee and as chairman of the influential Ways and Means Committee, which controls tax-writing legislation in the House.

As his stature increased on Capitol Hill, Ryan developed a reputation as a numbers-obsessed policy wonk — that rare politician more interested in pouring over budget briefing books than in attending glitzy social and political events around Washington. 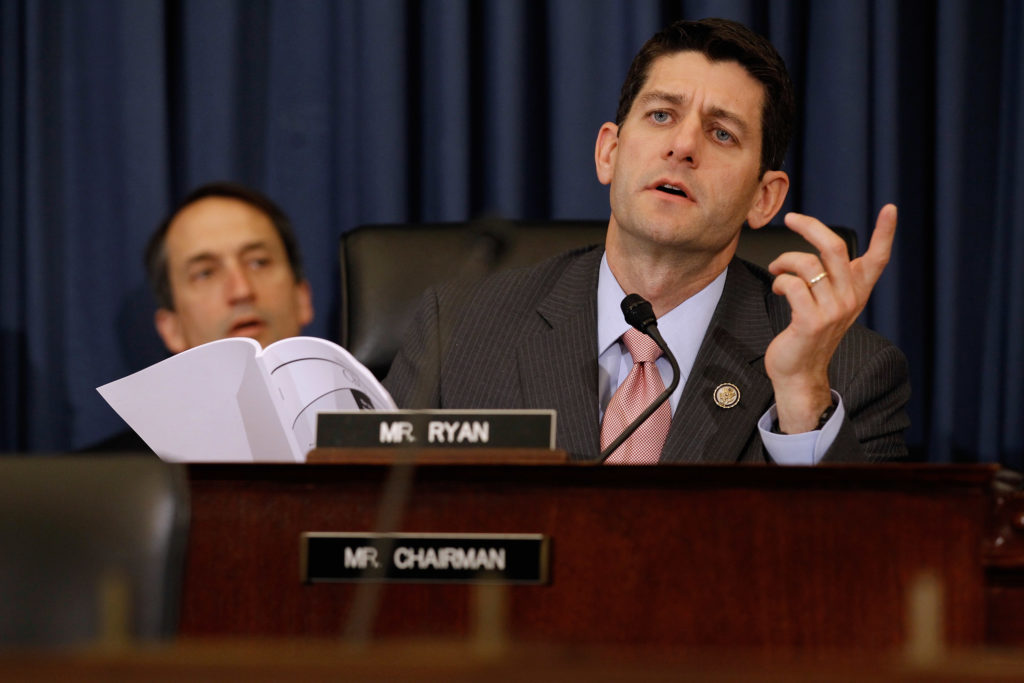 All the while, Ryan focused his sights on two holy grails of the conservative movement: passing the first tax code overhaul since 1986, and scaling back Social Security, Medicare and Medicaid, and other government services. Ryan included so-called entitlement reforms in several budgets that he wrote and the House passed during his stint as Budget Committee chairman. Ryan also made funding cuts to Social Security and Medicaid a key part of his campaign message in 2012, after joining the GOP presidential ticket as Mitt Romney’s running mate.

The gamble didn’t pay off that year, as voters opted to elect a Democrat, then-President Barack Obama, who ran on an opposite message of expanding the social safety net. Ryan and Romney joined a long list of Republicans who have tried unsuccessfully in recent decades to reduce government spending on programs that benefit low-income Americans.

After his re-election 2004, President George W. Bush vowed to spend his political capital on a push to privatize Social Security, but the plan drew heavy criticism and the Bush administration quickly gave up on the idea.

There was an element of deja vu of that moment last year, after House Republicans passed their tax reform bill. Ryan said that on the heels of the GOP’s victory on taxes he would turn to entitlement reform in 2018. But House and Senate Republicans showed little interest in doing so in an election year, and Ryan’s plans were dead on arrival.

“More work needs to be done” to pass entitlement reform, Ryan told reporters Wednesday, an acknowledgment that he fell short on the issue as House speaker.

Still, Ryan signaled that he felt comfortable with his track record, especially on taxes. The GOP tax plan slashed taxes for corporations, a longtime Republican goal. The law also lowered taxes on some wealthy and middle class families, though those cuts aren’t permanent.

Democrats have criticized the law as a giveaway to the rich, but Ryan said Wednesday that it was an unqualified success. The tax code overhaul has “already been a huge success for this country,” Ryan said, adding that under Trump and a Republican-controlled Congress, the “economy is strong.”

Who will take Ryan’s place?

Ryan spoke alone at a podium, in a weekly press conference where he usually appears flanked by the House GOP leadership team. The absence of McCarthy, Ryan’s second in command, and Rep. Steve Scalise, R-La., the House Majority Whip and third-highest ranking Republican, served as a reminder of the party’s upcoming leadership fight.

McCarthy is widely seen as the favorite to succeed Ryan, despite his failed bid for speaker in 2015, in part because of his close relationship with Trump. But Scalise — who has gained national prominence after surviving a mass shooting during a congressional baseball practice last year — is reportedly weighing a run, and could pose a serious challenge.

McCarthy praised Ryan in a statement that didn’t mention the looming fight over his job. “Today is a sad day for me personally and for our conference, but Paul’s selfless leadership has put our conference and our country in a better place,” McCarthy said.

Scalise issued a statement calling Ryan “a deeply principled father and conservative leader, and a great friend.” He added: “I’m grateful for his leadership and I look forward to working with him through the remainder of his time in the House to advance President Trump’s agenda.”

Later Wednesday, in an exchange with reporters on Capitol Hill, Scalise said House Republicans should focus on the midterms, not the speaker’s race, to ensure Democrats don’t regain control of the chamber. “Days like today show people just what’s at stake in November, because Nancy Pelosi would love to be speaker again,” Scalise said, referring to the House Democratic leader. 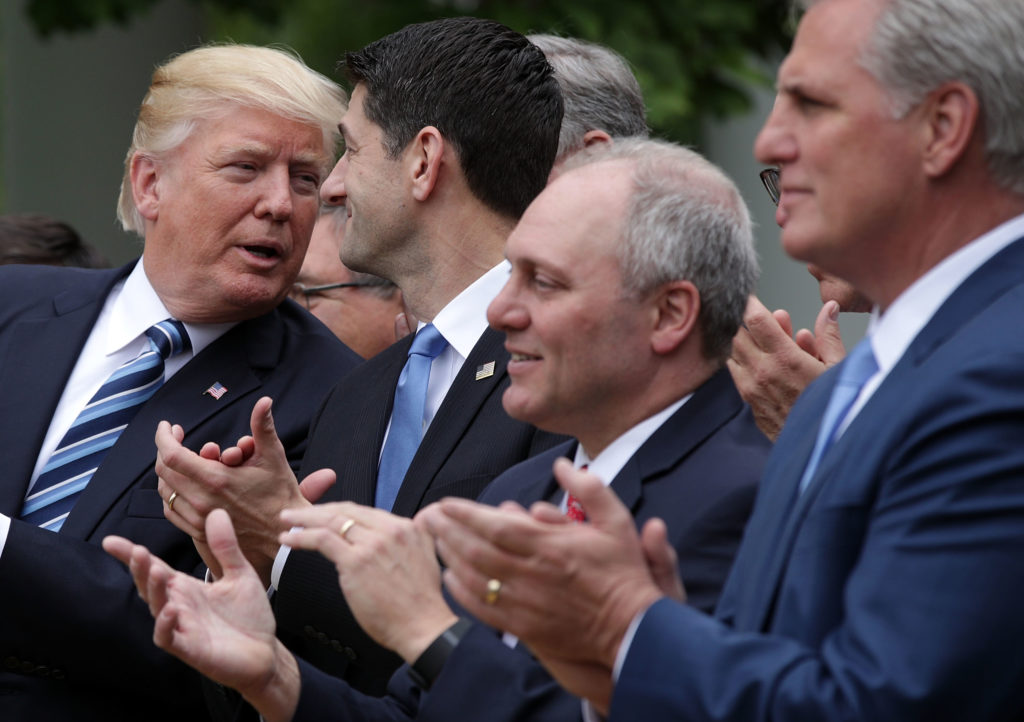 The speakership is decided in a private vote held by the House members who belong to the party that controls the chamber. Republicans currently control 237 seats in the House. Ryan’s successor will need to win a majority of the caucus’ vote, by building a coalition of moderate Republicans and members of the House Freedom Caucus, a small but powerful block of conservatives led by Rep. Mark Meadows, R-N.C.

Meadows said Wednesday that he wasn’t interested in running for speaker, according to Politico. The North Carolina Republican also reportedly said that many lawmakers will not want to wait until Ryan retires to replace him, raising the prospect that some members will push for a vote for speaker sometime before the midterm elections in November.

But other House Republicans said they expected the vote would wait until early next year, in the final weeks before Ryan steps down. “It will happen in January. I’m sure the candidates will be active” before that, Rep. Hal Rogers, R-Ky., said in a brief interview.

At his press briefing, Ryan signaled the speakership vote would take place after the midterms, though he didn’t offer a specific date. Ryan brushed aside a question about whether House Republicans would be hurt by having what amounts to a lame-duck speaker for the rest of the year, saying he would still be able to carry out his job in the coming months.

What Ryan’s departure means for Republican control of the House

Ryan also said his announcement to retire should not be viewed as a signal that Republicans are in grave danger of losing the House this fall.

Since Trump took office, a growing number of GOP lawmakers have announced that they plan to retire next year — including, most recently, Rep. Dennis Ross, R-Fla., who announced the decision to staff on Wednesday morning, around the same time as Ryan, the Tampa Bay Times reported.

Ryan’s successor will need to build a coalition of moderate Republicans and conservative members of the House Freedom Caucus.

The wave of GOP resignations have been widely interpreted as a vote of no-confidence in the party’s ability to retain control of the House under Trump. Ryan’s retirement announcement will no doubt ramp up those concerns, despite his best efforts to assuage Republicans that they should have nothing to fear.

The 2018 midterms will not “hinge on whether Paul Ryan is speaker or not,” he said.

Some Republicans agreed, saying they didn’t think his decision was a statement on the party’s chances in November.

“That’s just not the case at all,” said Rep. Brian Mast, R-Fla. “It’s his family. He’s gotten things accomplished that he wanted to get accomplished.”

Ryan said his main consideration in stepping down was a desire to spend more time with his family. Ryan and his wife, Janna, have three teenaged children. The family lives in Wisconsin, and Ryan said he typically only sees his children on weekends. If he stayed in Congress, Ryan, whose father died when he was 16, said his children would grow up with him as “weekend dad,” something he did not want to happen.

Left: House Speaker Paul Ryan addresses a news conference where he announced he would not seek re-election in November, on Capitol Hill in Washington on April 11, 2018. Photo by REUTERS/Aaron P. Bernstein