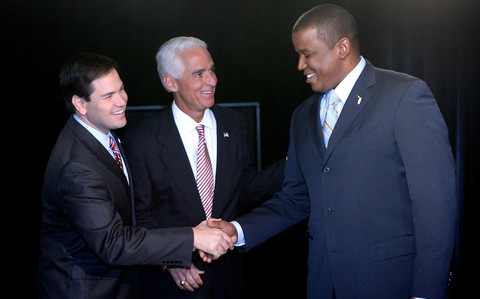 If you weren’t sure who the front-runner is in the Florida Senate race, Wednesday night’s televised debate cleared that right up.

Democratic Rep. Kendrick Meek and Gov. Charlie Crist, the Republican-turned-independent, both looked to make up ground on Marco Rubio by labeling the Republican a far-right extremist in their hour-long meeting.

“You haven’t been drinking the Kool-Aid, my friend, you’ve been drinking too much tea,” said Crist, hammering Rubio for his support from the conservative Tea Party movement.

When Rubio criticized Meek for supporting a more “radical” health care bill than what eventually passed by Congress, Meek shot back, “I’m shocked Marco Rubio would even use the word radical because I guess he’s been called that quite a bit.”

For his part, Rubio sought to tie his two opponents to President Obama’s agenda. “If you like Obamacare, if you like the stimulus plan, you can vote for Charlie Crist or Kendrick Meek. I’m probably not your candidate,” said Rubio.

Adam Smith and Beth Reinhard of the St. Petersburg Times/Miami Herald have this breakdown of the debate:

“Rubio is comfortably leading Crist in recent polls, and his basic goal over the next four weeks is to run out the clock and avoid significant mistakes. He didn’t make any in the first prime-time televised debate in the race, but he also took some sharp jabs over his own record as a fiscal conservative and on divisive issues such as abortion and Social Security.

“Crist charged at Rubio throughout the debate, but didn’t come across as angry. Meek cast himself as the scrappy defender of working people.”

In the hours leading up to the debate Rubio announced he had hauled in more than $5 million in the past three months, a new fundraising record for a Florida Senate race. The total leaves the Republican with $5.5 million in the bank. Crist and Meek have not yet released their fundraising reports for the quarter, which ended Sept. 30. Crist had $8 million cash on hand at the close of the last quarter, while Meek had nearly $2.6 million.

HIS KIND OF TOWN

Giannoulias and his Republican opponent, Rep. Mark Kirk, are locked in a dead heat that remains one of the country’s true toss-up marquee races.

The campaign has been anything but pretty as both candidates have spent most of their time battling back against their own baggage. For Giannoulias, that requires putting as much distance possible between him and his work at his failed family owned bank. Kirk has had to restore credibility with the voters after being exposed as someone less than totally honest about his military record and professional work experience.

Sen. John Cornyn, the Texas Republican who heads the campaign arm for Senate Republicans, has called the Illinois race one of the “trophy seats” he seeks since the seat was once filled by President Obama.

Illinois remains one of the states in which President Obama can do far more good than harm for his fellow Democrats on the statewide ballot. His visit Thursday will be followed by some fundraising help by first lady Michelle Obama next week.

Rick Santorum, the former GOP Senator from Pennsylvania, has been traveling to the early primary and caucus states for the better part of the last year and is all but certain to launch a presidential campaign following the midterm elections.

Thursday, Santorum takes a page out of the Romney 2008 playbook and opens an Iowa-based political action committee to dole out cash to Hawkeye State Republicans in hopes of collecting some chits down the road.

“My federal PAC, America’s Foundation, has already assisted some candidates in the Hawkeye State, but I am eager to do more and the Iowa Keystone PAC will help us do that. There are many strong conservatives running in Iowa and assisting them with financial support may help put them in the victory column come Election Day,” Santorum said.

The PAC is expected to disburse at least $25,000 between now and Election Day.

Santorum announced the formation of the PAC on the eve of his sixth trip to the first in-the-nation caucus state in the last year.