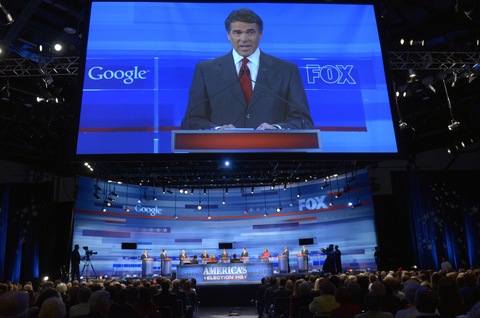 Here are your three Friday morning truisms about the race for the Republican nomination:

1) Debate performances will not determine who the GOP nominee is next year.

2) Rick Perry has made Mitt Romney a much better candidate than he had previously demonstrated.

3) Getting into a presidential contest late in the game has its apparent drawbacks.

To be sure, these high-profile, media-saturated events have a significant impact on the press narrative that forms around each of these candidates. And when that media narrative takes hold, it becomes very hard to shake. That’s what makes these debates such high-stakes affairs for the candidates, and that’s why Texas Gov. Perry and his team are now going to be working overtime to assuage concerns among supporters, donors, voters, party poo-bahs,and the press that he might not be ready for primetime.

At the Fox News/Google/Republican Party of Florida debate in Orlando Thursday night, Perry delivered an unsteady performance, while his main competitor for the nomination, Romney, once again delivered his attacks cleanly, stuck to his message about the economic turnaround he intends to lead and constantly displayed the benefit of having once before run for president.

The topics of immigration, Social Security and health care once again provided the sharpest contrasts between the two leading candidates.

The New York Times’ Jeff Zeleny and Jim Rutenberg on their immigration exchange:

“Mr. Romney sought to capitalize on the concern among many conservatives about Mr. Perry’s position on illegal immigration, harshly criticizing the Texas policy that allows illegal immigrants to qualify for in-state tuition rates at public colleges and universities.

“‘That just doesn’t make sense to me,’ Mr. Romney said, noting that illegal immigrants receive as much as $22,000 a year in tuition breaks that out-of-state citizens do not get.

“Offering an impassioned defense of that policy — and receiving boos from a segment of the audience — Mr. Perry did not back down, saying, ‘If you say that we should not educate children that have come into our state for no other reason than they’ve been brought here by no fault of their own, I don’t think you have a heart.'”

“Romney pressed Perry to explain whether he would dismantle Social Security as a federal program and turn it over to the states, as he has suggested. Perry countered that he would preserve the program for those on it or near retirement and fix it for younger workers. He said he would support a limited role for states to manage retirement security for state employees.”

“‘There’s a Rick Perry out there that is saying — and almost to quote, it says that the federal government shouldn’t be in the pension business, that it’s unconstitutional. Unconstitutional and it should be returned to the states,’ Romney said. ‘So you better find that Rick Perry and get him to stop saying that.'”

“Perry gave a foreign policy answer that offered no indication he’s thought about how to respond to threats against America, twice bobbled attacks on Mitt Romney’s well-documented departures from conservative orthodoxy, called immigration hard-liners heartless and, in what was otherwise his best answer of the evening, stretched the truth in the course of delivering a well-rehearsed line about why he mandated pre-teen girls to be vaccinated against HPV.”

Gov. Perry will have two-and-a-half weeks to better prepare before the next debate on Oct. 11 at Dartmouth College in Hanover, N.H.

If his polling and fundraising numbers between now and then continue to dominate the field, he may find himself with a bit of breathing room. If he starts looking less like a front-runner, however, then the pressure for a home-run debate performance will be palpable.

The 112th Congress seems to be replaying the same script over and over again. The possibility of a government shutdown, or more accurately, a lapse in money appropriated to keep the government running, is real possibility.

House Republicans, after adding more spending cuts to a temporary spending bill that failed on the floor Wednesday due to defections from conservatives, were able to attract just enough of their own members, as well as six Democrats, to pass a government funding bill that would extend government funding from Sept. 30 to Nov. 18. Twenty-four Republicans still voted against the bill.

Robert Pear of the New York Times breaks down the key details of the early morning vote:

“House Republican leaders, trying to recover from a humiliating political defeat, made one change in the bill. The new version would offset more of the cost of disaster assistance by rescinding $100 million from an Energy Department program that guaranteed a loan for Solyndra, the solar equipment manufacturer that filed recently for bankruptcy protection.

“The bill, to finance government operations for seven weeks after the start of the fiscal year on Oct. 1, faces problems in the Senate, where Democrats want to spend more, without cutting other programs to offset the cost.

“‘The House bill is not an honest effort at compromise,” said the Senate majority leader, Harry Reid, Democrat of Nevada. ‘It fails to provide the relief that our fellow Americans need as they struggle to rebuild their lives in the wake of floods, wildfires and hurricanes, and it will be rejected by the Senate.'”

Thursday, as noted in this National Journal story, House Speaker John Boehner, R-Ohio, had two options: abandon additional cuts to spending levels agreed to in the debt-ceiling debate and negotiate with Democrats for enough votes to pass a compromise, or appease conservatives by adding more offsets to disaster aid. He chose the latter.

With Congress scheduled to go on recess next week, action moves to the Senate, where Sen. Reid could move to kill the House bill, forcing the two chambers to compromise or face a lapse in funding after Sept. 30. Senate Democrats want a “clean” continuing resolution funding bill that doesn’t alter spending levels and also want the House to pass their $7 billion FEMA funding bill, which does not find a way to pay itself.

A key issue is not just the lapse in funding for a multitude of government operations, but the fact that FEMA, after a series of costly natural disasters, is due to run out of money to pay for repair projects.

“With Congress still toiling over how to pay for federal disaster funding, reconstruction projects in 42 states totaling $447 million are on hold, according to Federal Emergency Management Agency records….

“The reconstruction and disaster mitigation projects — mostly road, bridge and public building repairs — are in limbo because FEMA’s disaster relief fund is almost out of money.

“In the wake of Hurricane Irene’s destruction, the fund has less than $215 million available, far below the $1 billion agency officials prefer to keep on hand.”

But as the Associated Press reports, Solyndra officials say they won’t answer questions.

AP’s Matthew Daly has the details:

“Solyndra Inc. CEO Brian Harrison and the company’s chief financial officer, Bill Stover, have notified the House Energy and Commerce Committee they will invoke their Fifth Amendment right to decline to testify to avoid self-incrimination.

“Silence from the two executives will not stop committee leaders from pursuing their investigation into a $528 million loan Solyndra Inc. received from the Energy Department in 2009.

“GOP lawmakers say they will ask questions about Solyndra, regardless of whether they are answered.

“In a letter to Energy Secretary Steven Chu, GOP lawmakers said they were expanding their inquiry into the Solyndra loan, which has become a rallying point for Republican critics of the Obama administration’s push for so-called green jobs.”

The New York Times has a story reporting on how Solyndra came to secure the loans, which apparently included lobbyist influence.

“While no evidence has emerged that political favoritism played a role in what administration officials assert were merit-based decisions, Solyndra drew plenty of high-level attention. Its lobbyists corresponded frequently and met at least three times with an aide to a top White House official, Valerie B. Jarrett, to push for loans, tax breaks and other government assistance….

“But during the period when Solyndra’s loan guarantee was under review and management by the Energy Department, the company spent nearly $1.8 million on Washington lobbyists, employing six firms with ties to members of Congress and officials of the Obama White House. None of the other three solar panel manufacturers that eventually got federal loan guarantees spent a dime on lobbyists.

“Energy Department officials said the lobbying had no impact on their decisions. But Solyndra, which had been among 143 companies to express an interest in a loan guarantee and 16 that were asked to submit a formal application — ended up securing the first financial commitment. Solyndra’s loan guarantee was the highest of the four companies”.