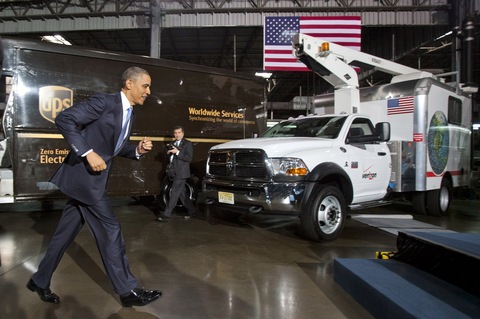 President Obama jogs to the podium to address UPS employees at a facility in Maryland on Friday. Photo by Jim Lo Scalzo/Pool photo via Bloomberg.

“It Begins With Us” is the name of the video that the Obama 2012 campaign emailed to its 13 million supporters shortly after 5 a.m. EDT Monday, marking the official launch of the president’s re-election effort.

It’s precisely what you might expect from the Obama team. The president is not featured in the video. Instead, it focuses on five grassroots supporters, most of whom hail from battleground states.

Each person in the cast addresses what will likely prove to be larger narratives as the campaign progresses:

One difference this time around: The word “change” only appears once in the two-minute video.

In the email accompanying the video, President Obama writes:

“The politics we believe in starts not with expensive TV ads or extravaganzas, but with you — with people organizing block-by-block, talking to neighbors, co-workers and friends. And that kind of campaign takes time to build. So even though the race may not reach full speed for a year or more, the work of laying the foundation for our campaign must start today.”

Aides to the president argue that campaigning as the incumbent comes with more pluses than minuses. Although it’ll certainly have a different feel than the unlikely path charted last time around, those aides also say that recapturing some of that 2008 “magic” will be critical.

The campaign will file its official paperwork with the Federal Election Commission on Monday in order to start raising money for what may be the first $1 billion campaign in history. The president is expected to attend fundraising events in Chicago on April 14 and in California, April 20-21.

President Obama doesn’t have any public appearances on his Monday schedule. Vice President Joe Biden is doing an event with Secretary of Education Arne Duncan at the University of New Hampshire, which will likely be a battleground state yet again in 2012.

If you missed Jeff Zeleny’s profile of the man at the helm of the campaign operation, Jim Messina, in Sunday’s New York Times, be sure to read it: LINK

Friday might be the day that the funding stopgap expires, but Congressional negotiators don’t have until then to reach a deal on a measure to fund the government for the rest of the fiscal year.

In fact, lawmakers probably have two days to come to a final agreement that contains $33 billion in cuts from current spending levels if they’re going to stay true to their self-imposed rules.

When House Republicans took over in January they instituted a rule requiring legislation be posted three full days before a vote, which means the spending bill would have to be ready by Tuesday. Even then, that would give the Senate little time to act in order to get the measure to the president by the end of Friday.

The administration, led by Vice President Biden, and Senate Democrats have been touting the $33 billion figure since last week. President Obama cited the number again in calls to Senate Majority Leader Harry Reid, D-Nev., and House Speaker John Boehner, R-Ohio, on Saturday, urging the leaders to reach a deal soon to avoid a shutdown.

In the GOP’s weekly radio address, Rep. Boehner continued to insist there was “no agreement” on how much to cut. “Republicans continue to fight for the largest spending cuts possible to help end Washington’s job-crushing spending binge,” he said.

Despite Rep. Boehner’s public push-back, the Washington Post’s Paul Kane reports $33 billion remains the goal, “with the key hurdles being which items would be cut and whether Republicans can win the inclusion of policy prescriptions on social and regulatory issues.”

Kane notes, “Democrats are also pushing to draw savings from programs that are outside the annual appropriations bills that fund most of the federal government, contending billions of dollars in cuts could come from mandatory spending programs inside the Agriculture and Treasury departments.”

As lawmakers grapple with how to fund the government for the next six months, a much more significant debate about spending is set to begin Tuesday, when House Budget Committee chairman Paul Ryan, R-Wis., is expected to unveil the Republican alternative to the president’s outline released in February.

Appearing on “Fox News Sunday,” Rep. Ryan said the Republican plan would cut spending by more than $4 trillion over the next decade by targeting not just discretionary spending, but entitlement programs such as Medicare.

“By addressing the drivers of the debt now, we do it in a gradual way. We can guarantee the mission of health and retirement security, not just for current generations, but for future generations,” Rep. Ryan said. “And we are going to put out a plan that gets our debt on downward trajectory and gets us to a point of giving our next generation a debt-free nation. That in and of itself will help us grow the economy today and create jobs.”

For the time being, the focus will remain on the current funding dilemma, which must be solved before lawmakers can have a bigger debate about spending priorities for next year and beyond.

Former President Bill Clinton told ABC’s Bianna Golodryga that he would be inclined to arm the rebels in Libya, a policy the Obama administration has apparently been reluctant to support.

In an interview on ABC’s “Good Morning America,” Clinton said he may not have all the information he needs, “but I would be inclined to do it.”

The former president said that ever since his wife became secretary of state, he refuses to get the daily intelligence briefing provided to the world’s most exclusive club: former U.S. presidents. He said he never wants to give the impression that he’s speaking for the administration.

His comments about arming the Libyan rebels to help avoid a stalemate come after Secretary of Defense Robert Gates and Hillary Clinton have made clear that the Obama administration has not made any final determination about whether it wills supply arms to the forces trying to oust Moammar Gadhafi from Tripoli.

“I sure wouldn’t shut the door to it,” Bill Clinton concluded.

CNN’s Peter Hamby reports: “Huckabee, who has shown no signs of mounting a repeat presidential bid in the state, nevertheless won the vote with 23 percent of the 152 ballots cast, local GOP officials told CNN. He was followed by former House Speaker Newt Gingrich, who captured 11 percent of the vote. Minnesota Rep. Michele Bachmann finished third with 10 percent.”

The field of 2012 GOP contenders will be tested by South Carolinians again this Saturday when the Greenville County Republican Party conducts a straw poll at its convention.