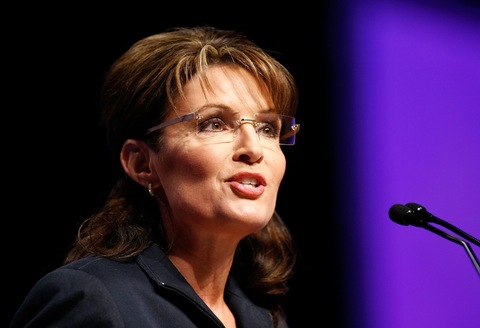 Perhaps the most astonishing part of Sarah Palin’s decision not to seek the 2012 Republican presidential nomination is how easily and completely it was overshadowed by the death of Steve Jobs.

It was three years ago, on the eve of the 2008 election, that Tina Fey stepped away from John McCain during the cold open on “Saturday Night Live” to look into her own camera and explain she was “going rogue” while holding up a Palin 2012 t-shirt.

For the last three years, Palin has continuously stoked speculation that she may run for president to great and frequent media attention.

However, when it came down to her announcement on Mark Levin’s radio show that she would not seek the Republican nomination, nor pursue a third-party or independent candidacy, the news was hardly surprising.

Later on Fox News she told Greta van Susteren that she had already been fielding phone calls from some of the GOP candidates.

Earlier in the day, Palin sent a letter to supporters spelling out her reasoning for passing on a presidential bid.

“As always, my family comes first and obviously Todd and I put great consideration into family life before making this decision. When we serve, we devote ourselves to God, family and country. My decision maintains this order.”

Palin clearly has a dedicated following of very loyal supporters. She has the ability to draw attention to an issue or event with the speed of sending a tweet or posting a Facebook message.

There is little doubt that despite whatever negative political baggage she may carry, the remaining candidates on the GOP stage would either welcome her endorsement or at least welcome her decision to stay on the sidelines.

Rick Perry’s was the first statement to hit our inbox.

“Sarah Palin is a good friend, a great American and a true patriot. I respect her decision and know she will continue to be a strong voice for conservative values and needed change in Washington,” said Perry.

Her decision not to enter the race has very little impact on the shape of the race that remains because there was little expectation from donors, elected officials, and her potential opponents that she was going to take the plunge.

But in her statement and her subsequent radio and TV appearances, Palin made clear she intends to play a role in the months ahead.

It’s beginning to look a lot like Christmas — in Iowa.

Late Wednesday, the Nevada Republican Party set a date of Jan. 14, 2012 (a Saturday) for its presidential caucuses, leaving the first-in-the-nation states of Iowa and New Hampshire very few options if they intend to avoid holding their nominating contests in December of this year.

In a statement announcing the move, Nevada GOP chair Amy Tarkanian said the decision was made “in the best interest” of the state. “I’m extremely pleased to finally have a firm date for a caucus that will greatly improve Nevada’s standing and relevance in terms of national politics,” Tarkanian said. “By establishing this date, we maintain Nevada’s standing as one of the first four ‘carve-out’ states and as the very first in the west.”

Nevada’s move comes after Florida pushed its primary up to Jan. 31 (in violation of rules laid out by both major parties), which in turn led to South Carolina’s decision to hold its first-in-the-South primary ten days earlier, on Jan. 21.

The ball now appears to be in New Hampshire Secretary of State Bill Gardner’s court. Gardner had said he would wait for the Silver State to select a date for its caucuses before deciding when to host the Granite State’s primary — but Gardner also told Politico earlier this week that he must follow state law that requires the New Hampshire contest be held at least seven days before the next nominating event.

Josh Putnam, who runs the calendar tracking blog Frontloading HQ, has laid out the limited options facing New Hampshire — and how they would likely impact Iowa.

“The choices facing New Hampshire: hold a non-Tuesday primary — likely on January 7 — or move to the next available Tuesday slot seven or more days before Nevada — January 3. The former allows Iowa to slide into a January 2 or 3 date while the latter forces Iowa into December.”

After Michigan and Florida infused the calendar with a bit of chaos by moving up their primaries in 2008, the national party committees took steps to deter states from making similar moves this cycle, but it appears the interest in going early has once again out-weighed the cost (losing half their delegates) for states breaking the rules.

While it may not be the $17 million Perry raised in seven weeks — Ron Paul’s third quarter money haul of $8 million is nothing to sneeze at.

Paul’s campaign said the total raised was for the primary campaign and came from more than 100,000 unique donors. And in yet another sign of his fundraising prowess, the $8 million figure almost doubled the $4.5 million Paul brought in the previous quarter.

The Texas congressman touted the grassroots enthusiasm behind his candidacy at a National Press Club Luncheon in Washington Wednesday, and sought to draw a contrast with the Perry campaign, reports Kim Geiger of the Los Angeles Times.

“If you get $8 million, half as much, and you get it from small individual donors who are fervently engaged in campaigning for you, that’s a lot different than getting money that more than likely might have come, for the other candidates, from special interests,” Paul said. “All donors are not equal. I will take my small donations, with the enthusiasm of the people who send me the money.”

The big question marks for Paul are how much of the money is still left in the bank, and whether he can find a way to use his resources to break out beyond his fervent base of supporters.

All future campaign events can be found on our Political Calendar.

For more political coverage, visit our politics page. Sign up here to receive the Morning Line in your inbox every morning.