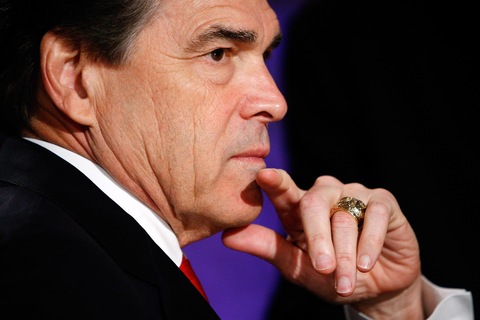 Watch a video clip below from Perry’s economic plan announcement:

Texas Gov. Rick Perry is adding a bevy of senior advisers to his campaign team, preparing to launch his first round of television advertising in Iowa and rolling out his most significant policy proposal to date — an optional 20 percent flat tax.

With just over two months to go before the Iowa caucuses kick off the nominating process, Perry is in the midst of a campaign re-launch to get his White House bid back on course.

Perry took to the op-ed page of the Wall Street Journal to provide a preview of his tax plan:

“The plan starts with giving Americans a choice between a new, flat tax rate of 20% or their current income tax rate. The new flat tax preserves mortgage interest, charitable and state and local tax exemptions for families earning less than $500,000 annually, and it increases the standard deduction to $12,500 for individuals and dependents.

“This simple 20% flat tax will allow Americans to file their taxes on a postcard, saving up to $483 billion in compliance costs. By eliminating the dozens of carve-outs that make the current code so incomprehensible, we will renew incentives for entrepreneurial risk-taking and investment that creates jobs, inspires Americans to work hard and forms the foundation of a strong economy.”

Perry goes on to propose a 20 percent corporate tax rate (down from its current 35 percent rate) and phasing out what he calls “corporate loopholes and special interest tax breaks.”

In addition to an overhaul of the tax code, Perry plans to call for a balanced budget amendment, a federal spending cap of 18 percent of GDP and the repeal of both President Obama’s health care law and the Dodd-Frank financial reforms.

Entitlement spending reform is also a key focus of Perry’s vision for renewed economic growth. In his Wall Street Journal op-ed, he suggests allowing for private accounts for younger workers.

In an attempt to provide a contrast from his main rival’s plan, Perry told CNBC’s John Harwood that Mitt Romney’s proposal is just “nibbling around the edges.” That’s the same critique of Romney’s plan offered by Jon Huntsman’s campaign last week.

This tax reform debate may shape up to be the central policy issue of the GOP nomination battle, much like the individual mandate (or lack thereof) in Democratic health care reform plans sucked up much of the policy oxygen in 2008.

“While the details of Perry’s plan will be announced today, flat tax proposals reduce the contributions of the most fortunate households, shifting the burden onto the middle class,” Kvaal writes.

“Under a flat tax, all Americans would pay the same tax rate, abandoning the progressive principle that the most fortunate Americans can afford to contribute more.”

As for the staffing changes at Perry Campaign HQ, the New York Times’ Zeleny/Rutenberg/Harwood have the details:

“With the first electoral contests just over two months away, Mr. Perry is expanding beyond the tight circle of advisers from Texas, adding veterans of past Republican campaigns who will help direct the candidate’s ad spending, polling and policy development.

“And his campaign will begin a multimillion-dollar advertising drive as early as this week aimed at reintroducing himself to Republican voters on his own terms.”

Alex Burns and Maggie Haberman of POLITICO have the details on Perry’s initial Iowa TV buy.

Herman Cain’s campaign has released a web video ad that taps almost too successfully into the viral formula for online success: the more outlandish the content, the bigger the splash.

The ad, which features Cain’s chief of staff, Mark Block, doesn’t get weird until about three-quarters of the way into the piece.

“America’s never seen a candidate like Herman Cain. We need you to get involved because together, we can do this. We can take this country back,” Block says earnestly into the camera. The video moves to a tight shot on Block’s face as he takes a dramatic drag from his cigarette as a pop song bumps in the background. “I am America,” a woman sings over the beat.

The video then reveals Cain staring into the camera. He slowly breaks into a wry smile.

CBS News notes that the video was uploaded on Oct. 19 but didn’t start spreading online until Oct. 24 because it was not linked to Cain’s official YouTube site. CBS was able to confirm with Cain’s campaign that the video was legitimate.

That the video was uploaded days ago and is somehwhat hidden on YouTube suggests the outlandish nature of the spot wasn’t part of a strategy to attract attention to Cain, who despite a lack of a robust organization or campaign funds (as of Sep. 30) is a front-runner for the GOP nomination.

Whether the goofy video spot was intended to go viral or not, it’s now competing for attention with a more serious Cain effort: On Tuesday, his camp started running a 50-state radio ad on Rush Limbaugh’s radio program.

Jennifer Jacobs of the Des Moines Register has details on the radio spot:

“‘We are running a 50 state campaign, with the belief that every Republican voter in every state should have a say in the outcome of our party’s nominating process,’ Mark Block, Cain’s chief of staff, said in a written statement today.

“‘We believe this will support our renewed efforts to line up precinct captains in 1,500 locations across the state and help us raise the critical donations we need to fund our campaign effort,’ Grubbs said.

“A surge in donations for Cain put the campaign into a position to take Cain’s message to Republican primary voters nationally, Block said.

“‘Herman Cain recorded a message speaking directly to voters and we believe this will begin to solidify our support in all 50 states,’ Block said.

“The ad, which will continue into next week, promotes a new website called www.999MeansJobs.com.”

A Quinnipiac University poll out Tuesday morning in Ohio shows that both Gov. John Kasich and his law aimed at restricting collective bargaining rights for public employees (SB 5) are losing steam.

The numbers from Quinnipiac:

“Ohio voters support 57 – 32 percent the repeal of SB 5, the centerpiece of Gov. John Kasich’s legislative program, as the margin against the governor’s measure has almost doubled in the last month, from 51 – 38 percent for repeal September 27, a 13-point margin, to a 25-point margin in today’s Quinnipiac University poll.

“Gov. Kasich’s standing is in the same negative neighborhood as SB 5, with Ohio voters disapproving of his job performance 52 – 36 percent, down from 49 – 40 percent disapproval in September’s survey by the independent Quinnipiac (KWIN-uh-pe-ack) University.”

Be careful about drawing too many 2012 conclusions from an off-year ballot initiative effort in 2011. However, if Big Labor scores a big victory in the critical Buckeye State next month, you can certainly expect an energized Democratic base to place their eyes on the 2012 prize. And an energized Democratic base is something that has been lacking for President Obama across the country and in key battleground states.

PBS NewsHour’s Gwen Ifill and Mary Jo Brooks were recently in Ohio to look at the SB 5 battle and filed this report.

DOWN WITH THE SYSTEM

Gallup has a new poll showing that Americans overwhelming prefer a popular vote system for electing presidents instead of the current Electoral College system.

Gallup also notes that opinions were divided along partisan lines around the time of the 2000 election and the Florida recount, when George W. Bush won enough Electoral College votes to become president but lost the popular vote to Al Gore.

“During this period, Democrats were much more likely than Republicans to favor replacing the Electoral College system with a popular vote system. In a Gallup poll conducted Dec. 15-17 — shortly after the Dec. 12 Supreme Court decision that ended the Florida recount, thereby deciding the election in Bush’s favor — 75% of Democrats said they would amend the Constitution so that the candidate who receives the most votes nationwide wins. By contrast, 56% of Republicans favored keeping the Electoral College, while 41% favored replacing it with a popular vote system.

All future events can be found on our Political Calendar.