The Senate’s 2020 Democrats want impeachment witnesses. But that would mean skipping Iowa

The bitter fight over calling witnesses in the Senate impeachment trial is the only thing standing between President Donald Trump and a speedy acquittal before his State of the Union speech next Tuesday.

But the battle also could hinder Senate Democrats running for president ahead of the nation’s first nominating contest in Iowa on Monday.

If the Senate extends the trial in order to hear from witnesses such as former national security adviser John Bolton, it would force those 2020 Democrats — Bernie Sanders of Vermont, Elizabeth Warren of Massachusetts, Amy Klobuchar of Minnesota and Michael Bennet of Colorado — to remain at the Capitol while the rest of the primary field is free to crisscross Iowa and the other early-voting states at a critical moment in the race.

All four of the Democratic White House contenders in the Senate have joined their caucus in calling for witnesses. Under the rules, the Senate is required to meet six days a week during the trial, and none of the candidates have said they’re considering breaking the rules and skipping out on the proceedings to go to Iowa the day of the caucuses.

In a brief interview Tuesday at the Capitol, Warren said that, come Monday, “if there’s a trial I’ll be here.”

Republicans are claiming that “you can’t convict [Trump] based on hearsay and reports in the press,” Warren said. “Fine. Bring in the witnesses and the documentary evidence.”

“I just gotta do my job,” Klobuchar told reporters Wednesday. She said she was optimistic that “the citizens of America, not just in Iowa but the four early states and beyond, are gonna understand that some of us have a constitutional duty.”

Sanders declined to answer questions at the Capitol about how the trial might affect his plans for Iowa, where he is ahead in the polls. Former Vice President Joe Biden is leading in national polls, but is currently polling second in Iowa followed by Pete Buttigieg, the former mayor of South Bend, Indiana. Warren and Klobuchar round out the top five. (Bennet is not polling above 1 percent).

Bennet could not be reached immediately for comment. But last week, Bennet acknowledged what the rest of the candidates have largely avoided saying in public: the timing could not be worse.

“Obviously none of us that are running for president picked this timing,” Bennet told reporters on the first day of the trial. 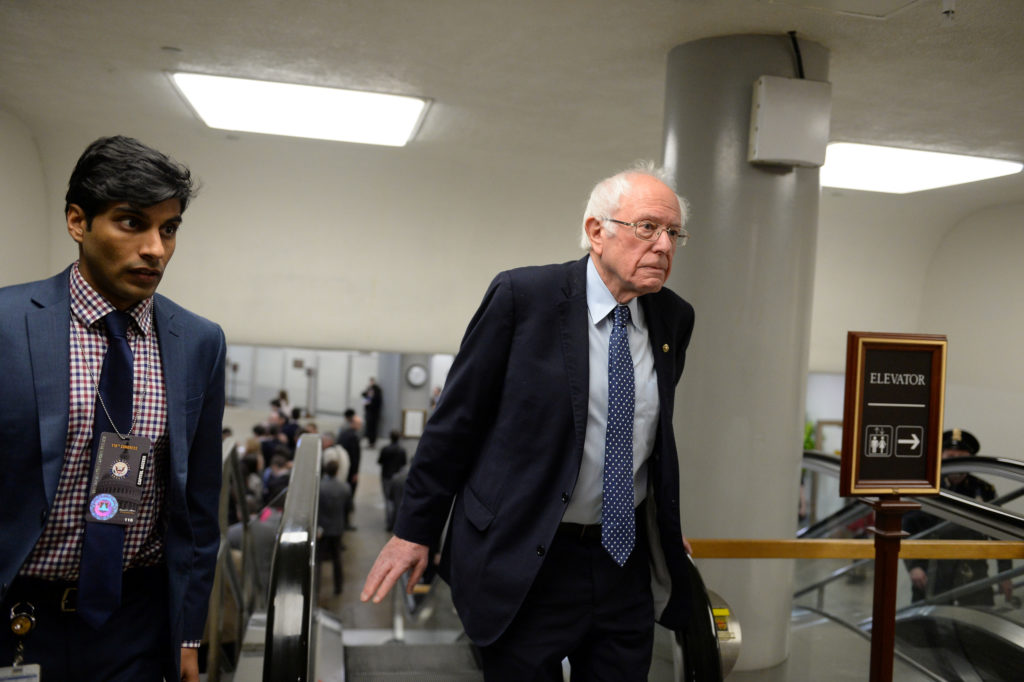 Democratic presidential candidate Sen. Bernie Sanders, D-Vt., walks up the escalator from the Senate subway on his way to the Senate impeachment trial on January 29, 2020. REUTERS/Mary F. Calvert

Ultimately, the trial schedule is not up to them — a frustrating reality for U.S. senators who operate as their own bosses and are used to wielding control over their daily calendars. And in the end, they may not have to skip the Iowa caucuses at all if Republican senators block witnesses.

Earlier in the week, it appeared that momentum was swinging toward calling witnesses, after new allegations against Trump surfaced in a book written by Bolton and scheduled for publication in March. In it, Bolton reportedly claims that Trump told him he was withholding military aid from Ukraine until the country announced an investigation into Biden and his son, Hunter Biden, who was on the board of the Ukrainian natural gas company Burisma while his father served as U.S. vice president.

Up until then, Trump’s lawyers and his allies in the Senate had claimed there was no first-hand testimony that Trump directly linked the hold on military aid to an investigation of the Bidens. The claims in Bolton’s book appear to refute that. What’s known about Bolton’s account also bolsters the Democrats’ argument that hearing from Trump’s senior advisers would provide a clear picture of the president’s motivations on Ukraine.

After the news broke about Bolton’s still-unpublished manuscript Sunday, the three moderate Republicans seen as the most likely ‘yes’ votes on witnesses voiced concern. Democrats need four Republicans to join them to include witnesses in the trial.

The claims in the book “strengthen the case for witnesses,” Sen. Susan Collins of Maine said in a statement Monday. Sen. Mitt Romney of Utah also said he wanted to hear from Bolton. Sen. Lisa Murkowski of Alaska said she was “curious” to hear from Bolton as well, though she has not yet said definitively which way she’s leaning.

But in the last 24 hours support for witnesses has eroded. After the Senate finished its first question session in the trial Wednesday, Republican leaders appeared more confident than ever that they would have the votes needed to swiftly wrap up the trial. The second question session will conclude Thursday night, teeing up a debate on witnesses Friday. 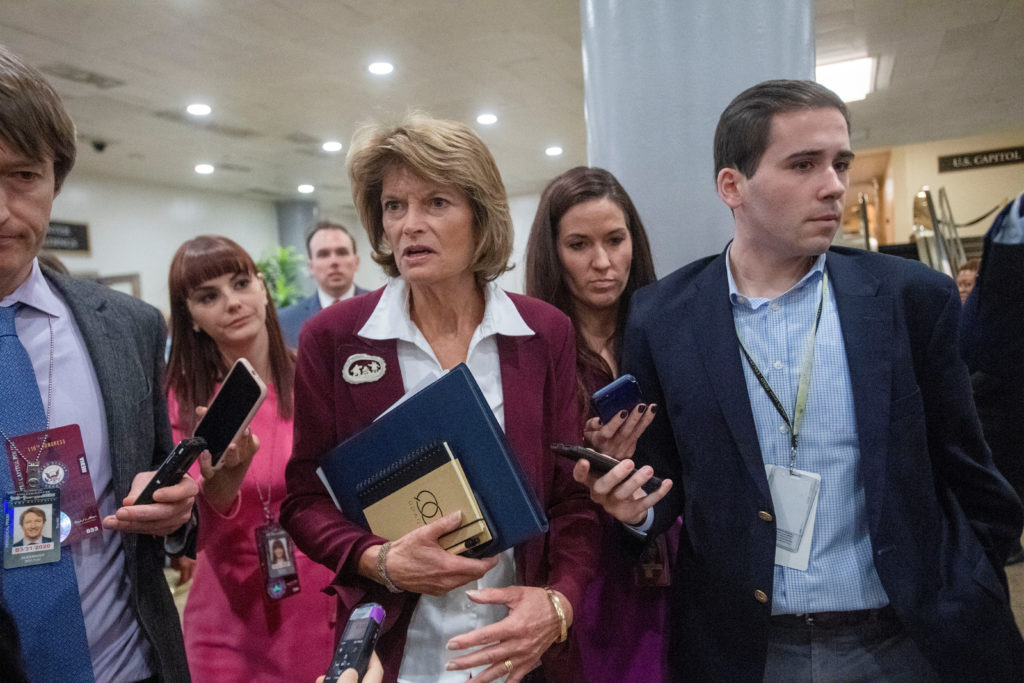 Meanwhile, as the fight over witnesses has seesawed back and forth, the senators running for president have been forced to wait in Washington, D.C. — and find creative ways to connect with voters roughly 1,000 miles across the country in Iowa.

To stay in the race, the candidates have appeared frequently on national TV and done interviews with local press in Iowa. The campaigns have also dispatched surrogates to stump on behalf of the candidates.

Rep. Alexandria Ocasio-Cortez of New York has campaigned for Sanders, for example, while Warren has relied on her husband, Bruce Mann, and Julian Castro, a former Obama cabinet member who dropped out of the 2020 race earlier this month.

Warren and Klobuchar have held “tele-town halls” with supporters in Iowa. Klobuchar even snuck in a surprise trip to Iowa on Tuesday evening, after the Senate trial was adjourned for the day in the early afternoon. (That was a rare exception; almost every other day so far, the trial has not ended until 10 p.m. or later.)

Inside the Capitol building, the rivals have adopted different approaches to speaking with the press — the principal way to get their messages out during breaks in the trial. Senators cannot bring their cellphones into the chamber, which means they cannot reach voters on social media or even communicate with campaign staff for hours at a time.

Klobuchar has spent more time with reporters than the rest, a reflection of her recent rise in the polls. She languished in the low-single digits for most of last year but has risen steadily in recent weeks as some voters seek out a moderate alternative in the primary race. With just one week to go before the caucuses, Klobuchar will likely benefit from any publicity as undecided voters make their final decisions.

Warren has chosen not to hold lengthy question-and-answer sessions with the media, though she has given short interviews on her way into and out of the Capitol.

Sanders has consistently rebuffed questions from reporters about the trial or the 2020 primary race. Bennet has also shunned the spotlight by largely avoiding the parts of the Capitol building where reporters are allowed to question the senators.

The impeachment trial’s impact on the 2020 primary race does not appear to be top of mind for the rest of the Senate Democratic caucus. Minority Leader Charles Schumer of New York has not addressed the topic in his daily press conferences, and several Democrats who are not running for president said in interviews the issue hasn’t come up in closed-door meetings either.

“I don’t remember it being raised, not only [during] trial days, but for the weeks leading up to it. I think Chuck Schumer and all of us have thought that we’ve got to do this, no matter whether it’s short or long,” said Sen. Bob Casey of Pennsylvania.

Republicans, for their part, want a short trial — preferably one that ends as soon as Friday night if they can win the vote on witnesses. But they also haven’t missed chances to point out that the Senate Democrats running for president are missing valuable time on the campaign trail in Iowa, just days before the caucuses.

Sen. Ted Cruz of Texas, who won the Rupublican Iowa caucuses in 2016, said the Democrats have no one to blame but themselves.

“The Democrats chose the timing of this,” Cruz said. “I suspect at least the Democratic senators who are running for president are dismayed to be sitting here in the Senate rather than at a Pizza Ranch in Cedar Rapids.”