The war on drugs gave rise to ‘no-knock’ warrants. Breonna Taylor’s death could end them

The Louisville city council voted Thursday to ban no-knock warrants, a policing tactic that led to the death of a local woman this spring that has since become a driving force behind the nationwide protests over policing.

The law was named after Breonna Taylor, a 26-year-old woman who was fatally shot by police executing a no-knock drug search warrant — which allows officers to enter a residence unannounced — at her apartment. Police say they did announce themselves when entering the residence, but Taylor’s boyfriend and neighbor dispute this.

Louisville’s Democratic Mayor Greg Fischer suspended use of no-knock warrants last month in the wake of Taylor’s death, which is under investigation by the FBI, but this law makes the ban permanent, and also requires police to wear body cameras when carrying out search warrants.

Fischer tweeted that he intended to sign the bill into law, and said he agreed with the council “that the risk to residents and officers with this kind of search outweigh any benefit.”

While Taylor’s death has brought renewed attention to the practice, it has long faced criticism for the injuries and deaths sustained in the process, and efforts to reform the practice have faced legal challenges in the past.

But in the weeks following the May 25 police killing of George Floyd in Minneapolis, a ban on no-knock warrants has become part of new proposals to reform policing.

On Thursday, Republican Kentucky Sen. Rand Paul introduced his own legislation that would “effectively end no-knock raids” in the U.S., he said. A ban on these warrants is also part of the broader Justice in Policing Act proposed by Democrats this week.

What are “no-knock” warrants and why are they used?

The increased use of no-knock warrants is a product of the country’s “war on drugs,” a series of federal and local policies aimed at cracking down on recreational drug use. President Richard Nixon launched the campaign in the 1970s, but it gained momentum in the 1980s under President Ronald Reagan.

In 1986, Congress passed the Anti-Drug Abuse Act, which established mandatory minimum prison sentences for certain drug offenses. As part of the focus on drugs, federal and local law enforcement implemented militarized strategies that included no-knock raids. In other cases, police use a “quick-knock” approach before entering a location.

The surprise nature of these raids is meant to help law enforcement disrupt criminal activity without giving a perpetrator time to react — either by using force against a police officer, evade arrest or get rid of evidence, said Walter Signorelli, an adjunct professor with John Jay College of Criminal Justice who served in the narcotics division of the New York City Police Department. Signorelli added that these methods can be most helpful in situations with violent offenders.

READ MORE: ‘The whole police system needs to be rebooted.’ How some cities are starting to tackle reform

In dangerous situations, surprise entries have helped maintain officer safety or protect pertinent evidence, said Bill Johnson, executive director of the National Association for Police Organizations. As members of Congress push for an outright ban on the tactic with their latest bill, Johnson argues they “should be an available tool to use in limited, appropriate times.”

Another factor in these raids is civil asset forfeiture which allows law enforcement to seize property linked to criminal activity that they can then keep or sell to supply department resources, said Peter Kraska, a professor with the School of Justice Studies at Eastern Kentucky University.

Data collected by Kraska shows that municipal police and sheriffs’ departments used no-knock or quick-knock warrants about 1,500 times in the early 1980s, but that number rose to about 40,000 times per year by 2000, he said. In 2010, Kraska estimated 60,000-70,000 no-knock or quick-knock raids were conducted by local police annually. The majority of those raids were looking for marijuana, he added. 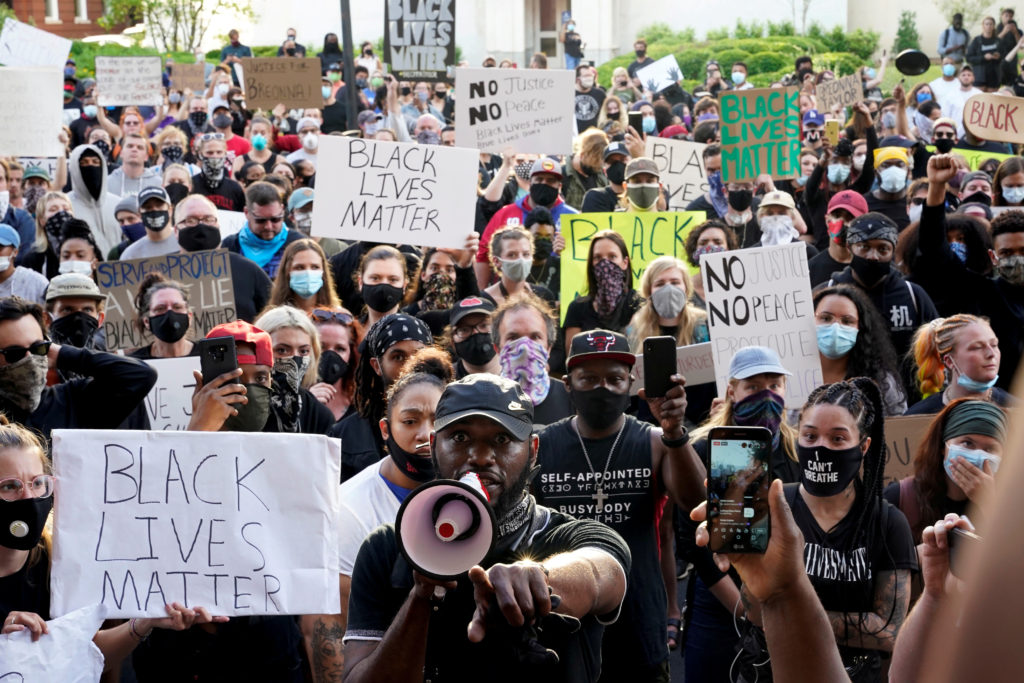 People gather in front of Louisville City Hall during a protest against the deaths of Breonna Taylor by Louisville police and George Floyd by Minneapolis police, in Louisville, Kentucky. Photo by Bryan Woolston/Reuters.

What is the legal basis for no knock warrants?

The 1963 Supreme Court ruling Ker v. California set a precedent in favor of forcible police entries involving narcotics out of concern that evidence could be destroyed. In 1995, the Supreme Court’s Wilson v. Arkansas ruling stated that police must “knock and announce” before executing a search warrant, but allowed for exceptions established in previous cases like Ker.

Richard v. Wisconsin in 1997 sought to add more clarification, allowing for no-knock searches when police have “a reasonable suspicion that knocking and announcing their presence, under the particular circumstances, would be dangerous or futile, or that it would inhibit the effective investigation of the crime by, for example, allowing the destruction of evidence,” according to the ruling.

Both the 1995 and 1997 rulings allowed local and state judges a lot of discretion in determining what constitutes “reasonable suspicion.”

And when it comes to no-knock raids, courts often support law enforcement, said David Moran, a law professor at the University of Michigan. The 2006 Supreme Court decision in Hudson v. Michigan determined that evidence seized in violation of knock-and-announce requirements may still be used against a defendant in court.

In the majority opinion, late Supreme Court Justice Antonin Scalia said excluding the evidence would not serve the original purposes of the “knock and announce” rule, which include protecting privacy and minimizing potential injury. That decision essentially removed incentives for police to go through the formal process of obtaining a no-knock warrant, said Moran, who argued the case before the Supreme Court.

The combination of court rulings protecting police searches has resulted in “sloppy” search warrants that do not have strong supporting evidence, said Mark Wohlander, a Kentucky-based attorney and former FBI agent.

Wohlander argued that the Fourth Amendment, which protects people in the U.S. from “unreasonable searches and seizures,” has been chipped away at by these rulings, and “has really no meaning anymore.”

While national and city-wide data on no-knock warrants is not widely collected and reported, one analysis by the Denver Post found that judges only rejected five out of 163 no-knock warrant requests from Denver police in 2000. About one-third of those executed no-knock raids did not get the required pre-approval from the district attorney, according to the Post’s analysis. In another analysis, the Washington Post found that between 2016 and 2018, in Little Rock, Arkansas, judges approved 103 of 105 no-knock warrants requested by police.

What happens in the execution of no-knock warrants?

A 2014 ACLU report analyzing more than 800 SWAT deployments involving no-knock and quick-knock entries, of which 62 percent were drug searches, determined that law enforcement found drugs in 35 percent of those drug searches and found nothing in 36 percent. In 29 percent of the raids, whether anything was seized is unknown, as police did not provide this information in their incident reports

The very nature of surprise entering someone’s home — often late at night or early in the morning — heightens the risk of violence, experts told the PBS NewsHour. They added that the prevalence of gun ownership in U.S. homes can further raise the risk. In Taylor’s case, her boyfriend said he fired his gun when police entered the home unannounced because he did not know who they were.

Even if police found drugs in 100 percent of their searches, “it’s too risky and extreme of a police tactic to justify making a drug bust,” Kraska said.

Data tracking injuries sustained during these raids is lacking, but over the years deaths resulting from no-knock raids have garnered public criticism.

A New York Times investigation found that at least 94 civilians and 13 law enforcement officers died in no-knock and quick-knock raids in the U.S. between 2010 and 2016, while many more were seriously injured. Because the federal government does not require police departments to report data about these incidents, the Times identified cases through interviews, ACLU data, web searches and news reports.

READ MORE: What is the ‘defund the police’ movement? 5 questions answered

In 2014, police executing a search warrant in Georgia threw a flash grenade into a room with a 19-month-old child. The child had to be put in a medically induced coma as a result of his injuries. In 2010, a police officer shot and killed a 7-year-old girl while raiding a Detroit apartment. Neither case resulted in criminal convictions for the officers involved. The legal precedent favoring police makes civil lawsuits difficult to win, experts told the NewsHour.

Multiple studies also indicate that black and Latino people are statistically more likely overall to be searched and arrested for drugs throughout the country. The 2014 ACLU report found that 39 percent of the SWAT team searches affected black individuals, 11 percent affected Latinos, 20 percent affected white people and 30 percent were unknown because of insufficient information from police incident reports. Of the no-knock searches that affected black and Latino people, 68 percent were for drugs, according to the ACLU.

Signorelli of John Jay College said police need to be more “judicious” with these warrants and strengthen their investigations before taking that approach. Kraska said he hopes some reform will come from the attention brought by Taylor’s death. The legislation proposed by congressional Democrats only mandates requirements for federal law enforcement, but it also conditions federal funding for state and local law enforcement on reform efforts. While limiting no-knock warrants has bipartisan support, the other measures in the Democratic bill will likely face Republican pushback.

Sen. Rand Paul’s Justice for Breonna Taylor Act introduced this week would prohibit no-knock warrants and require federal law enforcement give notice of their authority and purpose before executing a warrant, according to the senator’s website. The legislation would require the same of all state and local law enforcement agencies that receive funding from the Department of Justice.

In the meantime, Taylor’s death is still a part of the national conversation about police practices, specifically those that target or disproportionately impact people of color. Protesters around the country this past weekend carried posters with Taylor’s image as they demanded change. She would have turned 27 last Friday. No charges have yet been made against any of the officers involved in her death, and the FBI investigation is ongoing.

Left: A portrait of Breonna Taylor is posted to a pole to commemorate the 26-year-old killed by police in Louisville, Kentucky. Photo by Lindsey Wasson/Reuters.