The White House on Thursday released a one-page summary of its proposed immigration plan, calling for stricter border security and immigration measures as well as protections for young undocumented workers.

The proposal includes creating a $25 billion trust fund for a border wall system and border improvements, limiting the kinds of family members immigrants can sponsor to come to America, and eliminating the immigration visa lottery program, all top priorities for President Donald Trump.

In exchange, the plan offers a pathway to citizenship to 1.8 million undocumented immigrants, a concession to Democrats.

A White House official told the PBS NewsHour on Thursday that the administration, which had planned to release the plan Monday, decided to provide the details earlier then first intended because lawmakers asked for the information.

The White House plan comes as Congress negotiates what to do about the Obama-era Deferred Action for Childhood Arrivals program, or DACA.

The White House would likely not be releasing much more detail on Monday after putting out the framework Thursday, the official said.

White House officials have been holding conference calls and meetings with lawmakers, reporters, and immigration activists to explain their position. President Donald Trump is expected to highlight his immigration policy in his first State of the Union speech next week.

The White House plan comes as Congress negotiates the Obama-era Deferred Action for Childhood Arrivals program, or DACA. Last fall, Trump announced that he would end the program, which protects young undocumented immigrants brought here illegally as children from deportation, in March if Congress doesn’t come up with a legislative fix.

The issue became a key sticking point in negotiations over funding the federal government, and helped lead to a three-day shutdown earlier this week.

Trump has expressed support for extending the program, which was created in 2012 by the Obama administration. In recent days, however, the White House has put pressure on Democrats by pushing for greater immigration restrictions in return for protecting so-called Dreamers from deportation.

Doug Andres, a spokesman for House Speaker Paul D. Ryan, said in an email “we’re grateful for the president showing leadership on this issue and believe his ideas will help us ultimately reach a balanced solution.”

“This isn’t an offer of someone who wants to get to a deal.”

“This framework builds upon the four pillars for reform that the president has consistently put forth, and indicates what is necessary for the president to sign a bill into law,” he said. “I am hopeful that as discussions continue in the Senate on the subject of immigration, members on both sides of the aisle will look to this framework for guidance as they work towards an agreement.”

However, reaction outside Republican leadership has been mixed.

Eddie Vale, an immigration activist and consultant working with Democrats to pass a bill, sent out an email saying the plan was a “legislative burning cross.”

“This isn’t an offer of someone who wants to get to a deal,” he said. “It’s attempting to use the Dreamers as pawns to change the entire legal immigration system and get every item on Stephen Miller’s white supremacist wish list.”

But, Ali Noorani, executive director of the National Immigration Forum, sees the plan as an opportunity to negotiate.

“The news of the last few days indicates a growing willingness on the part of Republican leadership to find an immigration compromise,” he said in a statement. “President Trump, Leader McConnell and Speaker Ryan are in a position to do something we haven’t seen for decades: forge a pragmatic solution to our immigration system.”

Read the full memo below. 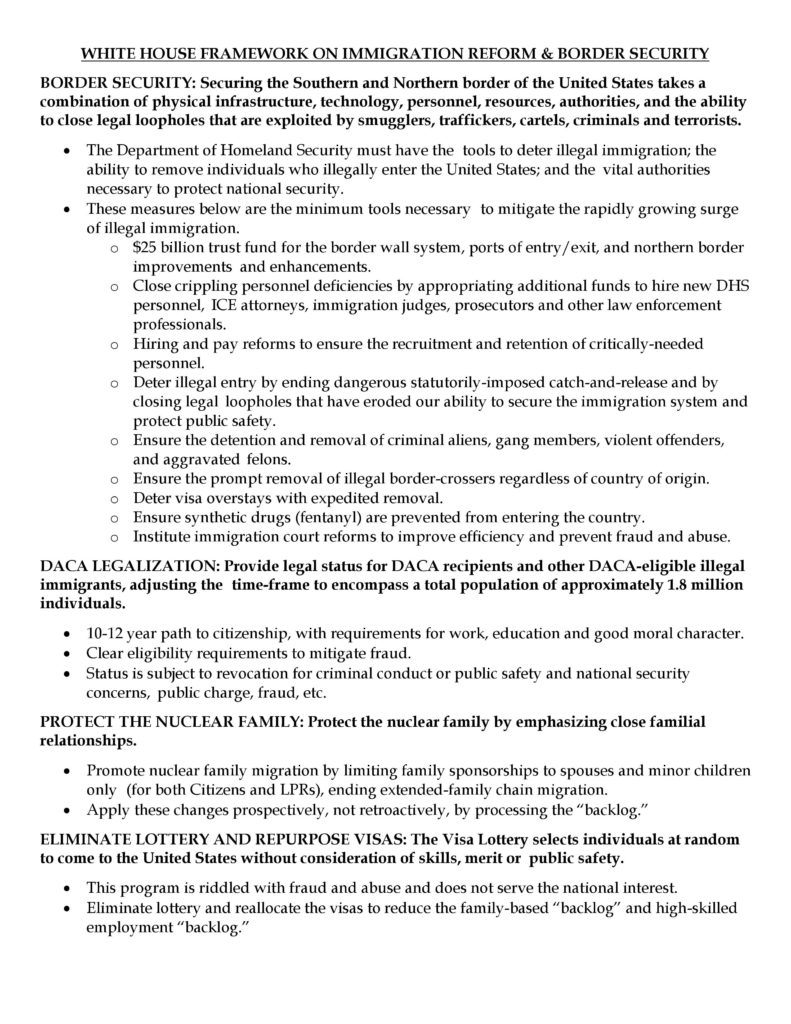 Left: President Donald Trump during an interview with Reuters at the White House in Washington, D.C. Photo by REUTERS/Kevin Lamarque.