Where things stand in the key battleground states

The election will be decided in a handful of key states. They include the usual suspects, like Florida, Ohio, and Pennsylvania, along with several other swing states. There are also a few traditionally noncompetitive states in play this cycle. Here’s a breakdown of the trend lines as they stand now in mid-October, according to a broad range of polls. (A caveat: polling isn’t always accurate, and some of the latest polls haven’t yet taken the second presidential debate into account.) Follow these states closely for the next four weeks, and you’ll have a good sense of where the election is headed.

The last few elections came down to Florida, Pennsylvania and Ohio. This election might be a little different, because Clinton could lose two of these states and still win the race. Trump needs to win Florida and Ohio to avoid defeat.

Florida appears to be trending in Clinton’s direction. The two nominees were tied in a Quinnipiac poll released on Sept. 8, but Clinton has been leading consistently by a few points since then. She had a three-point lead in the NBC/WSJ/Marist poll released on Oct. 9. If Clinton can hang on and win Florida, Trump’s path to the presidency narrows considerably.

The polls in Ohio are swinging back and forth. Trump was consistently leading Clinton by three to five points in September. Recent polls have Clinton back in the lead by a narrow margin; she was up by four points in a CBS/YouGov poll released on Oct. 9.

Where do you fit? Take our political party quiz

But Trump could still come back and win the state, where voters have been receptive to his trade and economics message. It’s probably his best shot of any of the big three. Trump likely can’t win without taking Ohio. No Republican president has ever won the White House without carrying the Buckeye State.

Pennsylvania is the one state in this group that hasn’t been competitive at all this election. Clinton has held a five to ten-point lead over Trump for the past several months, and that hasn’t changed recently. She held an eight-point lead in the Oct. 9 CBS/YouGov poll.

At this point in the race, it seems unlikely that Trump can win the state. But that shouldn’t be a surprise. Though Pennsylvania is still considered a top swing state, it has actually voted for the Democratic presidential nominee in every election since 1992.

After the big three, North Carolina, Virginia, Colorado and Nevada could be the most important states this year. Both Clinton and Trump could potentially afford to lose one or maybe even two of the big-three states if they can win several of these second-tier states.

The race in North Carolina has been tight. Trump led Clinton by one point in a four-way race according to an August Washington Post poll. Trump was up by three points in a Suffolk University poll released on Sept. 8. Since then, Clinton has maintained a one to three-point lead. She was up one point in a three-way race with Trump and Gary Johnson, the Independent Party nominee, according to a High Point University poll released on Oct. 10.

In 2008, President Obama became the first Democrat to win the state since 1976. But he won by less than one point. Obama lost the state to Mitt Romney by two points in 2012, making North Carolina a bit unpredictable. 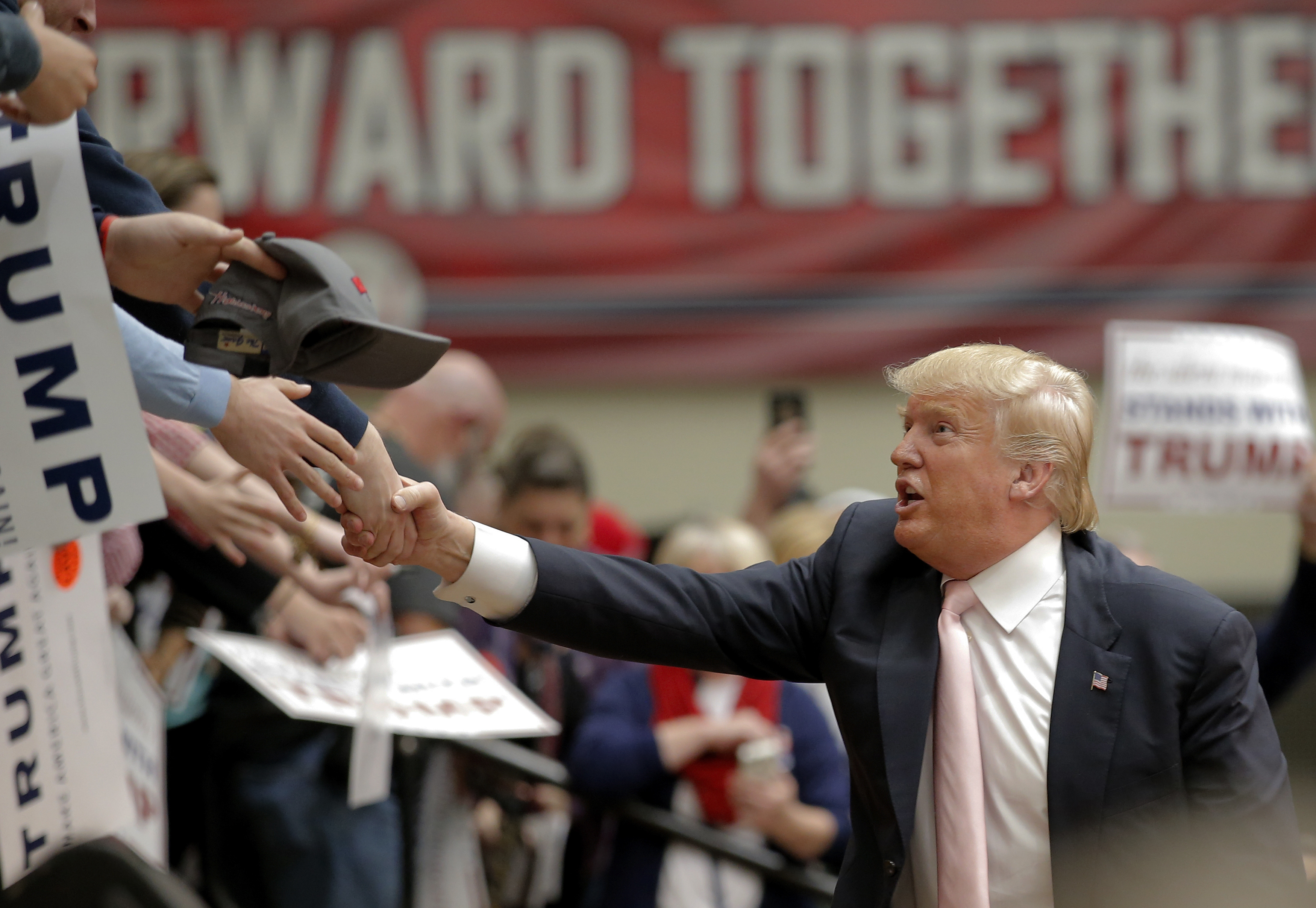 Donald Trump shakes hands with supporters after a campaign event in Radford, Virginia in February. Virginia was supposed to be a toss-up state, but polls suggest Clinton could win by a comfortable margin. Photo by Chris Keane/Reuters

Clinton is polling well ahead of Trump in Virginia, a traditionally conservative state that Obama won twice. Clinton led Trump by 12 points in a head-to-head poll released by Hampton University on Oct. 8. She had a nine-point lead in a four-way race according to a Roanoke College poll put out on Oct. 11. The Trump campaign had high hopes of winning Virginia earlier in the year, but that doesn’t seem likely anymore.

Polls in Colorado have been all over the map. Trump was up by four points in a Sept. 15 Emerson University poll. Clinton was up by one point in a CBS/YouGov poll released on Sept. 25, and up 11 points in a Monmouth University poll on Oct. 3. The state’s demographics favor Clinton. But Colorado also has a large number of registered independents, which could break for Trump.

Nevada, another key western swing state, is equally close. Trump held a one-point lead in an NBC/WSJ poll released on Sept. 11. After that, Clinton jumped out to small leads in the next three weeks. But the two candidates were tied in an Emerson University poll out on Oct. 6. Like Colorado, Nevada has a growing Hispanic population that could break for Clinton in the end. But Trump is keeping the race close here and could eek out a narrow win. 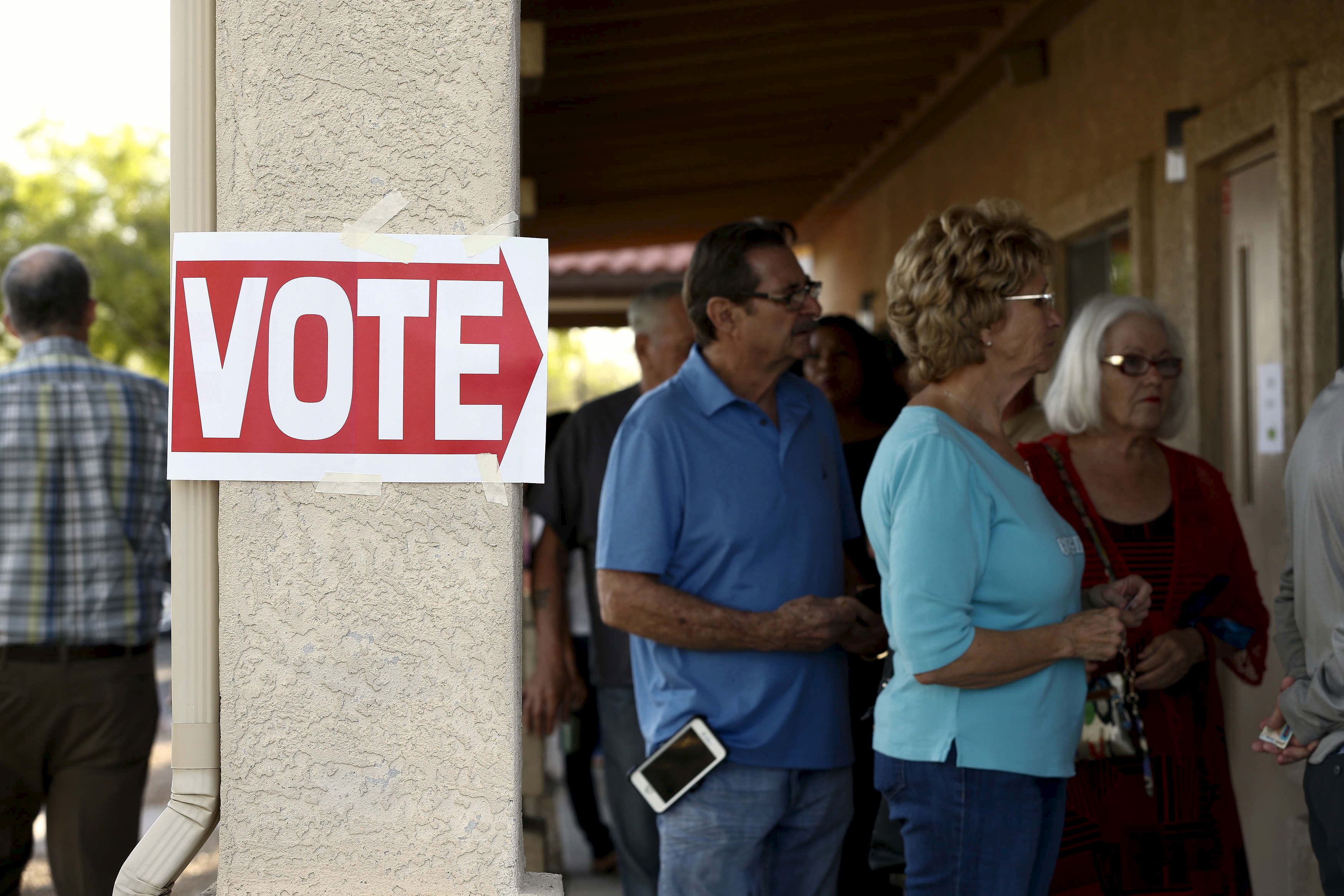 Voters waited on line at a polling site in Glendale, Arizona during the state’s presidential primary on March 22. Arizona is emerging as a battleground state in the general election. Photo by Nancy Wiechec/Reuters

During the primaries, Donald Trump talked a lot about his ability to expand the GOP map, especially in the Midwest. But it looks like the opposite is happening: Clinton has big leads in states like Michigan and Wisconsin, and is threatening to expand the Democratic Party’s map in two states: Arizona and Georgia.

In Arizona, Clinton is leading Trump by two points in a four-way race with third-party candidates Gary Johnson and Jill Stein. That’s according to an Emerson University poll released on Oct. 6. Other polls in the state have the candidates tied or give Trump a one-point lead.

No matter what, the race looks close in a state that has only voted for a Democratic candidate once (1996) in the last 10 elections. Mitt Romney carried the state by nine points in 2012. Losing the state would be a big blow for Trump, and further narrow his path to winning the presidency.

Georgia is another traditionally deep-red state where Clinton is doing surprisingly well, thanks in large part to the state’s growing Hispanic population. She led Trump by four points in an Atlanta Journal-Constitution poll taken in early August, right after the Democratic National Convention.

But since then, the state has drifted back in Trump’s direction. Trump has led Clinton by at least three points in every major poll since the start of September. Trump led Clinton by seven points in a four-way race, according to a Quinnipiac University poll from Sept. 22. Clinton’s campaign would love to pick up this state, but right now it looks like it’s moving out of her reach.

Left: Hillary Clinton spoke at a rally at Ohio State University in Columbus, Ohio on Monday. Both campaigns are focused on key battleground states in the final weeks of the race. Photo by Lucy Nicholson/REUTERS