This Florida county went big for Trump. Will it help the GOP win 2018?

NEW PORT RICHEY, Fla. — Florida’s biggest counties and metropolitan areas suck up most of the attention each election season, and the 2018 midterms are no different. Republican and Democratic candidates have focused on voter-rich counties like Miami-Dade and Orange, home to a growing Hispanic population in the Orlando area.

A small county north of Tampa offers insight into Trump’s victory in Florida two years ago, and it could help determine the Republican Party’s chances in two high-profile statewide races this fall.

But in many ways, a smaller county north of Tampa offers a better understanding of President Donald Trump’s victory in Florida two years ago, and it could help determine the Republican Party’s chances in two high-profile statewide races this fall.

Pasco County, which can be reached in roughly 30 minutes by car from downtown Tampa, has been reliable Republican territory since 2000, when it last voted for a Democratic presidential nominee.

Since then, the county’s older, heavily white electorate has voted for Republicans every four years. George W. Bush, John McCain and Mitt Romney won the county by an average of 6.6 points in the three presidential elections prior to 2016 — a comfortable margin in Florida, where races can be notoriously tight.

Something changed in 2016. Trump won Pasco County by 21.3 points, and ran up the score in other parts of the state as well, leading to a narrow win over Hillary Clinton that helped seal his presidential election victory.

Fast forward two years. Will Trump’s dominance in Pasco matter in the 2018 midterms? 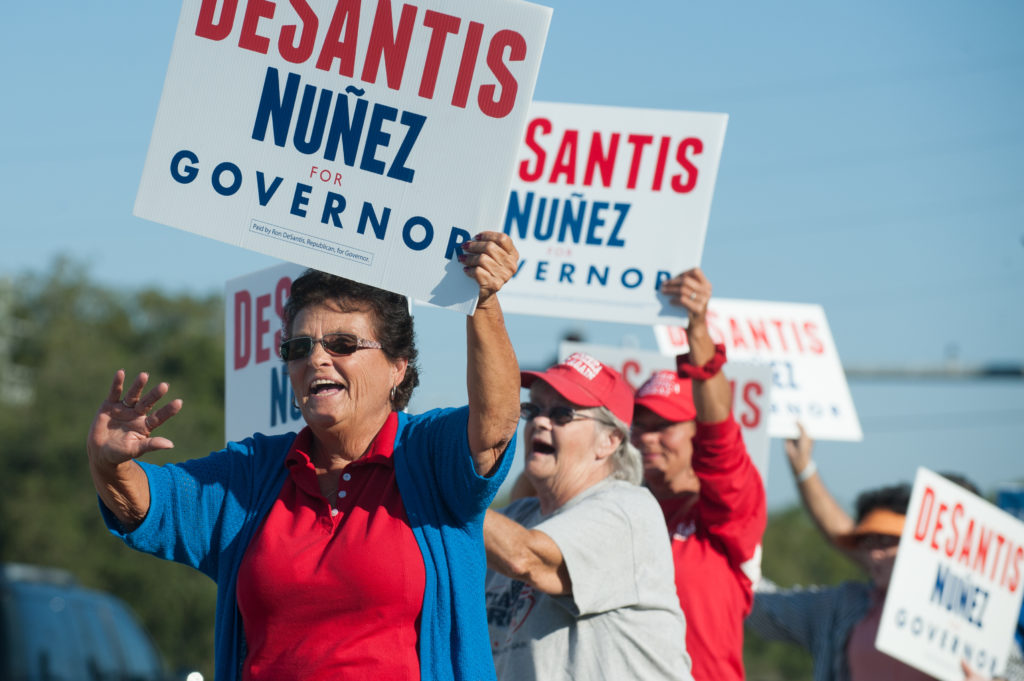 Brenda Harris (l), from Hudson, joins others to wave signs along Little Road in New Port Richey, Florida.Photo by Jay Nolan for the PBS NewsHour.

Both Republican Ron DeSantis and outgoing Republican Gov. Rick Scott are trailing their Democratic opponents in most polls, and will need to replicate Trump’s margin of victory in GOP strongholds like Pasco to win in 2018.

DeSantis, who is running for governor, and Scott, the party’s Senate nominee, are locked in tight races less than one week before polls close Nov. 6.

The PBS NewsHour spent time in Pasco County this week speaking with Republican voters about the 2018 midterms. In a good sign for the party, most said they were just as energized to vote for DeSantis, Scott and other Republican candidates as they had been to back Trump when he ran for president.

During a break from waving a sign at a small Republican rally Tuesday in New Port Richey, Ted Thomas, 71, a retired insurance agent, said his chief motivation was blocking Democrats from regaining control of the House and Senate.

“Democrats are saying if they get the House they’re going to move towards impeachment and block the things Trump’s trying to do,” said Thomas, who lives in New Port Richey. 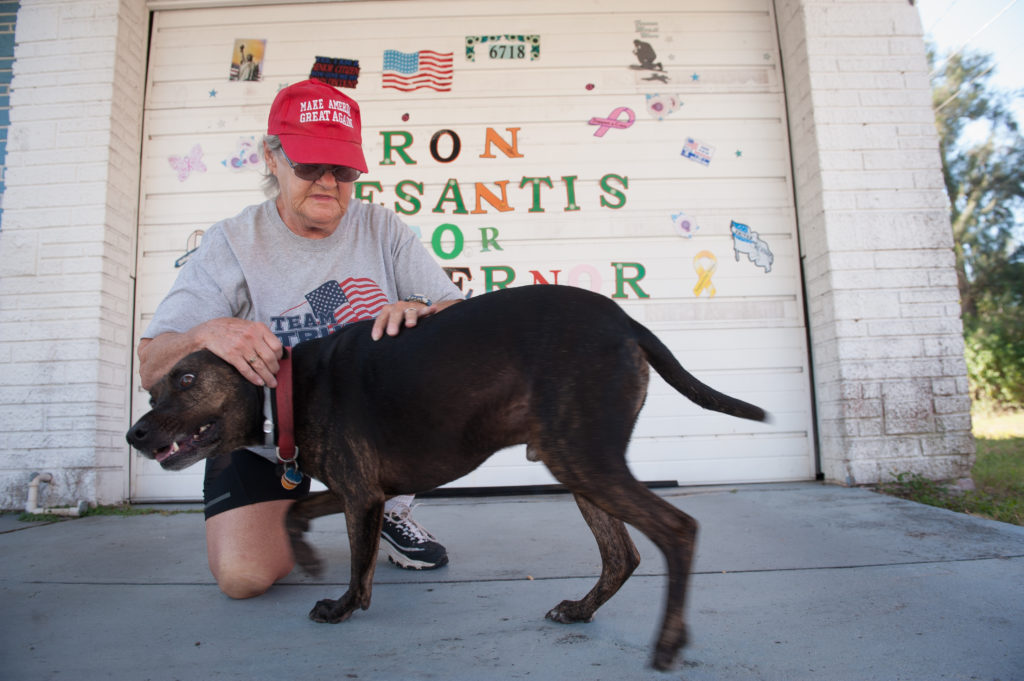 Ruth Harris tries to get her dog to pose in front of her garage after waving political signs along Little Road. Photo by Jay Nolan for the PBS NewsHour.

Trump won’t appear on the ballot this year alongside DeSantis and Scott. But it’s still the main reason voters like Ruth Harris, 73, are heading to the polls. Harris, a retired factory worker from Illinois who moved to Pasco in the early 1980s,said her decision to vote this year was also motivated by a desire to surround Trump with as many Republicans in Washington as possible.

If “he could get Congress to help him” Trump would get more things accomplished, Harris said. “He’s fighting the Democrats all the way. That’s why we need more Republicans in office.”

Harris and Thomas are part of a wave of middle class retirees who settled in Pasco County in recent decades, according to Bill Bunting, a local Republican leader and himself a New York City transplant with outer borough roots. 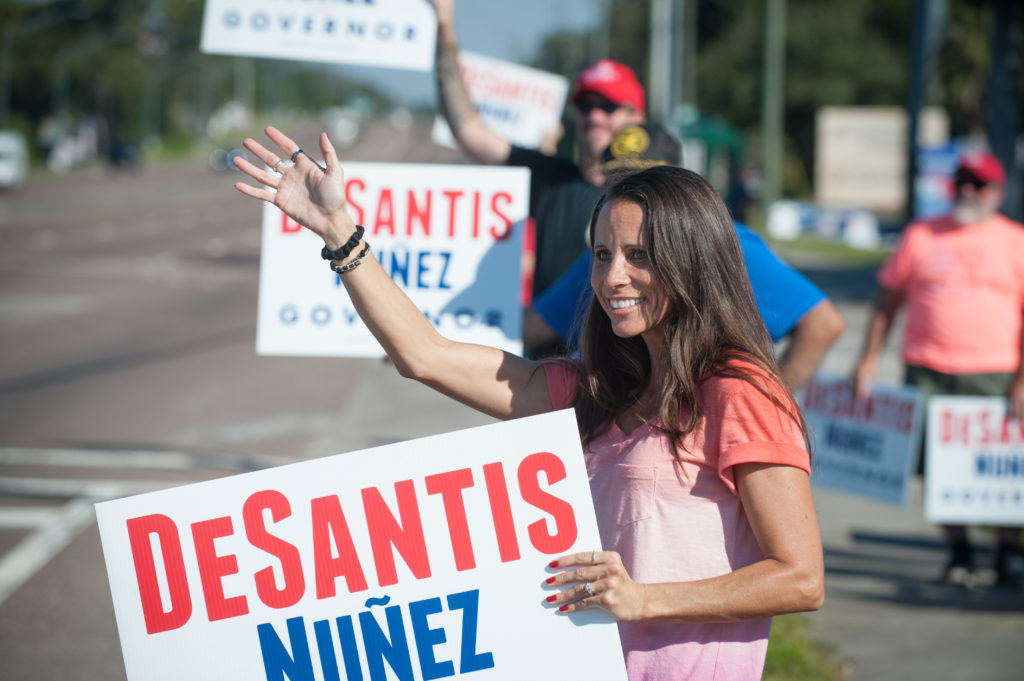 Kirsten Moore, from New Port Richey, rallies with others on Little Road. Photo by Jay Nolan for the PBS NewsHour

“Many of them are blue collar” voters and have the same political sensibility as voters in states like Michigan and Wisconsin that went for Trump in 2016, said Bunting, the county’s Republican state committeeman and a retired New York City Department of Sanitation worker.

Other GOP voters are more focused on the policy differences between the Republican and Democratic candidates who are at the top of the ballot.

Kirsten Moore, 43, a real estate agent, said she agreed with DeSantis’ conservative platform on immigration and other issues. Moore said she believed Gillum was a socialist, a claim DeSantis has made throughout the campaign, and added that she was dismayed at Gillum’s popularity in the state.

“It’s really creepy to see how many people think socialism is a good thing,” she said. 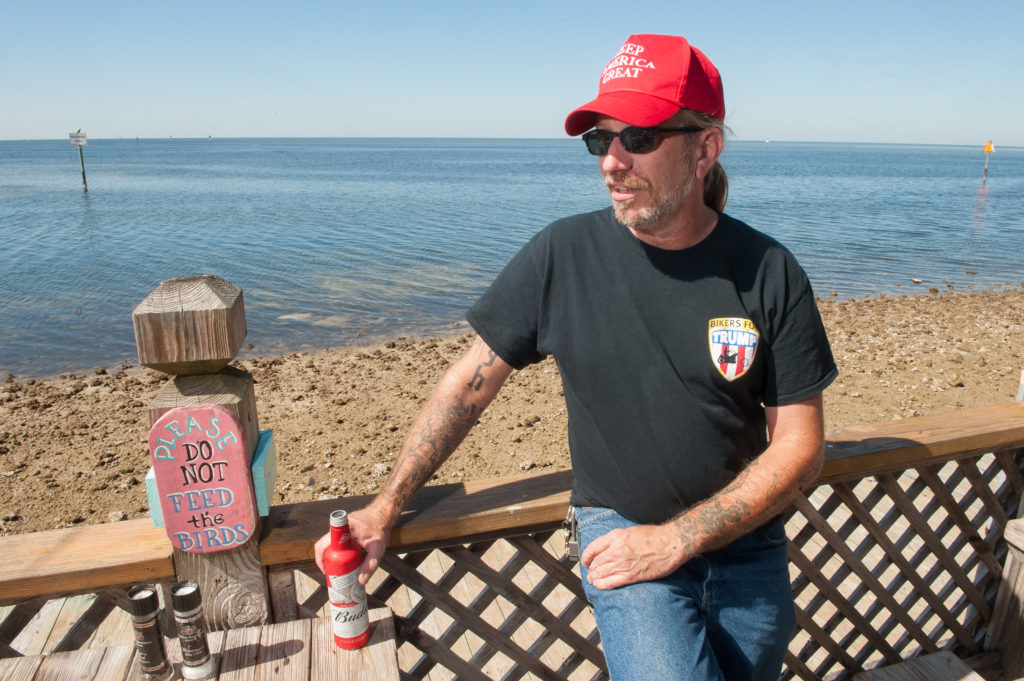 Chris Gough enjoys a beer at Sams Beach Bar, near his home in Aripeka, after a couple hours of waving political signs along Little Road in New Port Richey. Photo by Jay Nolan for the PBS NewsHour.

But in the end most voters kept returning to Trump, who has largely overshadowed Republican candidates in Florida and elsewhere around the country.

In 2018, said Chris Gough, 48, a technician for Harley Davidson, a vote for Republicans is a vote of confidence in Trump, especially his policies around the economy and trade. Nearly two years into his presidency, Trump has fulfilled many of the promises he made when he launched his campaign in 2015, Gough said.

“From the moment he came down the escalator I thought it was a joke. But then I listened to what he had to say and I was completely, 100 percent behind him after that first speech,” Gough said. Now that he’s in office, Gough added, “I trust what Trump’s doing. I see where he’s coming from.”

Left: Kathleen Callahan waves a flag and a sign of her favorite candidate in New Port Richey, Florida. It's part of Pasco County, a reliable Republican territory since 2000. Will voters turn out for the 2018 midterm elections without Trump on the ballot? Photo by Jay Nolan for the PBS NewsHour.