Demonstrators have set up blockades in British Columbia and Ontario in solidarity with opponents of the Coastal GasLink pipeline project that crosses the traditional territory of the Wet’suwet’en First Nation in northwestern British Columbia.

Since the Royal Canadian Mounted Police moved in to enforce an injunction and keep the hereditary chiefs and their supporters away from the pipeline work sites, protests by indigenous people and supporters have shut down the CN Rail network in eastern Canada and suspended most Via Rail passenger service. CN Rail transports goods worth 250 million Canadian dollars ($188 million) annually across Canada.

Trudeau said patience might be in short supply but said that makes it more valuable than ever. He said he’s against politicians ordering police to arrest people.

“There are those who would have us act in haste, who want to boil this down to slogans, and ignore the complexities. Who think that using force is helpful. It is not,” Trudeau said in Parliament.

Trudeau asked indigenous leaders to work with the government. He said he hoped the Wet’suwet’en hereditary chiefs will agree to meet with Minister of Crown-Indigenous Relations Carolyn Bennett. Bennett said she’s met with two of them but wants to meet with all of them as soon as possible.

Opposition Conservative Leader Andrew Scheer called Trudeau’s statement “a complete abdication of responsibility and a failure of leadership.” Scheer said many of “radical activists” have little to no connection with First Nations communities. He previously said the activists should “check their privilege.”

“For them this is just a warm-up act. A warm-up act for what they consider the next fight,” he said. “In their end their objective is the entire shutdown of our energy industry.”

He called the blockages illegal and said it’s time the government stepped in.

Assembly of First Nations Chief Perry Bellegarde earlier said government and industry have to give the time and space to work with the Wet’suwet’en people. “We say we want to deescalate and we want dialogue,” he said.

Via Rail said partial passenger rail service will resume Thursday to and from Ottawa and Quebec City, with a stop in Montreal. Almost all other Via trains remain cancelled.

Police also responded to the Victoria-area home of British Columbia Premier John Horgan on Tuesday when anti-pipeline protesters blocked his driveway. Members of the group Extinction Rebellion Vancouver Island said they would attempt a “citizen’s arrest” to show support for Wet’suwet’en hereditary chiefs. 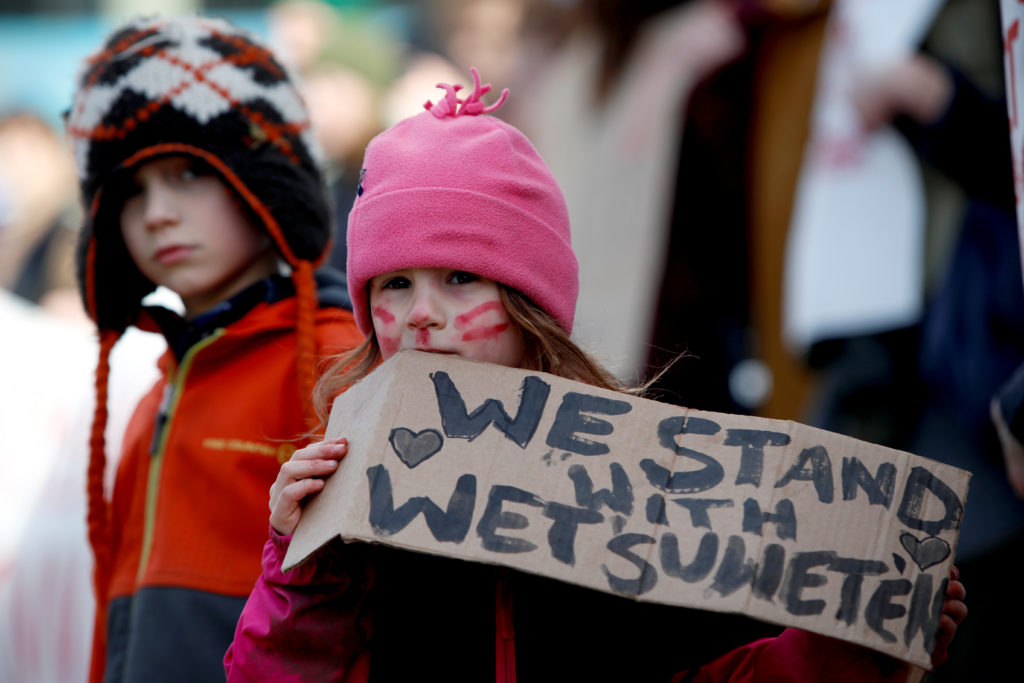 Children sit outside the Business Development Bank of Canada at 1515 Douglas Street as part of a protest against the Coastal GasLink pipeline, in Victoria, British Columbia, Canada February 14, 2020. REUTERS/ Kevin Light