Trump pulls back from brink of trade war with China, but no guarantee tensions are over

WASHINGTON — President Donald Trump on Monday hailed his administration’s temporary truce with China on trade, even as his Treasury secretary and China struck a note of caution on the latest agreement.

“On China, Barriers and Tariffs to come down for first time,” Trump tweeted.

On China, Barriers and Tariffs to come down for first time.

Both sides, however, have said there are no guarantees trade tensions are over. China hasn’t said how much it’s willing to reduce the U.S. trade gap. The Trump administration had sought to slash the deficit by $200 billion.

Also left unclear is the issue of intellectual property. The U.S. has long accused Beijing of secretly stealing U.S. technology from American businesses. Treasury Secretary Steven Mnuchin said Monday those issues “are part of our framework. These things cannot be fixed overnight.”

Commerce Secretary Wilbur Ross, who has been part of the U.S. negotiating team, is expected to go to China soon to follow up on last week’s discussions.

A day after declaring the trade war “on hold,” Treasury Security Steven Mnuchin told CNBC Monday that Trump is reserving the right to reimpose tariffs against Chinese goods if the two countries can’t agree on specifics to bring down the massive trade deficit with Beijing.

Likewise, China’s foreign ministry said details still have to be worked out.

“Given the increasing interaction between the two countries, we cannot assure you they will not encounter more frictions or disputes in the future,” said spokesman Lu Kang.

Last year, the U.S. had a record $376 billion deficit with China in the trade of goods; that was the largest by far with any nation.

Mnuchin has said to expect to see a big increase — 35 percent to 45 percent this year alone — in U.S. farm sales to China. Mnuchin also forecast a doubling in sales of U.S. energy products to the Chinese market, increasing energy exports by $50 billion to $60 billion in the next three years to five years. 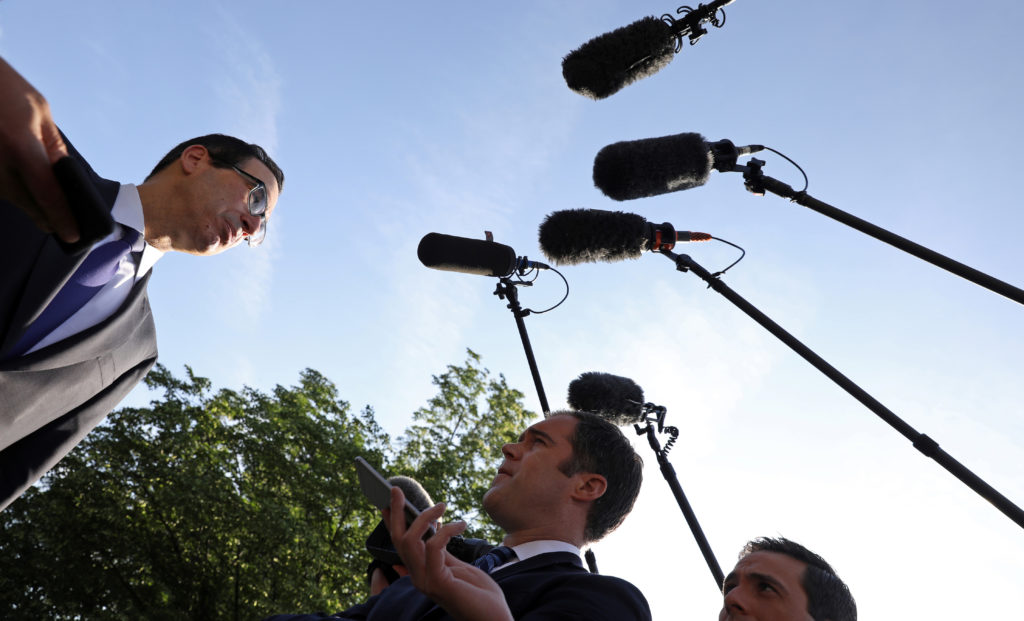 Farm sales could be key politically, as many Trump supporters in rural states say they feared a U.S. trade war with China would hurt their export business.

“China has agreed to buy massive amounts of ADDITIONAL Farm/Agricultural Products – would be one of the best things to happen to our farmers in many years!” Trump tweeted Monday.

Trade analysts were not surprised that China refused to agree to a numerical target for cutting the trade gap, but they said the talks probably were more successful in easing trade tensions.

If there is success in the U.S.-China discussions, analysts suggest it likely would involve the countries’ presidents this fall before the November elections.

“Part of the good news for markets: As long as both sides continue to be ‘constructively’ engaged, imposition of additional tariffs by either side is very unlikely,” analysts at investment management firm Evercore ISI said in a research note. “There is no reason for either side — particularly the U.S. — to destroy the process that both sides are building, which is what imposing tariffs would do.”

His early morning tweets underscore the complexity and importance of America’s relationship with China. For months, Trump railed against China to cut its trade surplus with the United States and threatened higher tariffs. China counterpunched with tariffs on U.S. products, rattling the market.

Throughout, the looming trade war has overshadowed Trump’s efforts to pressure North Korea on its nuclear program. The U.S. needs China’s help in sealing its border so Pyongyang can’t quietly skirt international sanctions.

“China must continue to be strong & tight on the Border of North Korea until a deal is made,” he tweeted. “The word is that recently the Border has become much more porous and more has been filtering in. I want this to happen, and North Korea to be VERY successful, but only after signing!”

Last month, the administration proposed tariffs on $50 billion of Chinese imports to protest the forced technology transfers. Trump later ordered Lighthizer to seek up to an additional $100 billion in Chinese products to tax.

China responded by targeting $50 billion in U.S. products, including soybeans — a shot at Trump supporters in America’s heartland. The prospect of an escalating trade war has shaken financial markets and alarmed business leaders.

The ban amounted to a death sentence for ZTE, which relies heavily on U.S. parts, and the company announced that it was halting operations. A week ago, Trump tweeted that he was working with Chinese President Xi Jinping to put ZTE “back in business, fast.” Media reports suggested that the U.S. was offering to swap a ZTE rescue for an end to proposed Chinese tariffs on U.S. farm products.

White House economic adviser Larry Kudlow said there could be “some small changes around the edges” in the sanctions against ZTE. But Kudlow added: “Do not expect ZTE to get off scot-free. It ain’t gonna happen.”

Left: Chinese and U.S. flags are set up for a meeting during an April visit by U.S. Secretary of Transportation Elaine Chao at China's Ministry of Transport in Beijing, China. Photo by Jason Lee/Reuters

What’s at stake in China trade talks for U.S. companies